The Flamenco on Fire Festival is getting into full gear after the first two days with Sara Baras and Tomatito, each of whom filled the Sabicas stage of the Pamplona Baluarte which is the venue for the first edition of this event in honor of Sabicas to do justice to this universal gypsy.

A brief sightseeing excursion though the historic city center took us to the Plaza del Castillo where each year on July 6th the “chupinazo” is launched to mark the beginning of the San Fermin festivities, then up Estafeta street where the legendary running of the bulls takes place, and most moving of all, Mañueta street where Agustín Castellón “Sabicas” was born.  A small bronze plaque marks the door where one of the greatest geniuses of the flamenco guitar spent his childhood. 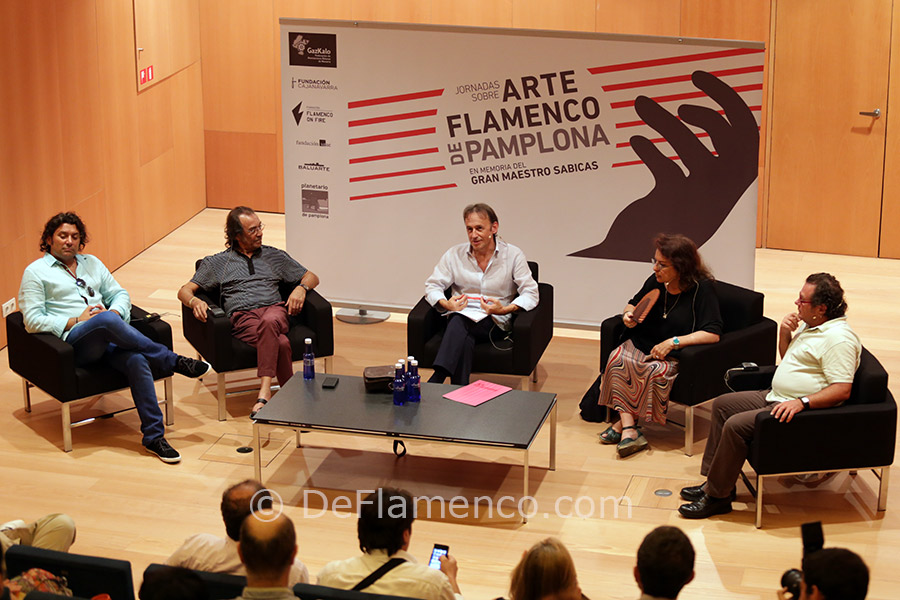 The third day of the festival, in one of the conference rooms of the Baluarte, flamenco guitar expert Norberto Torres gave a lecture, “Sabicas and the Concert Flamenco Guitar”.  In the adjoining room, maestro Pepe Habichuela and his son Josemi Carmona spoke of their experiences with Sabicas in Madrid, while our colleague Estela Zatania recalled her contact with Sabicas in New York in the 1960s when the guitarist from Pamplona was a major figure in the city.  Norberto Torres also took part in this round-table discussion moderated by Manuel Moraga.  At the Pamplona Planetarium Pablo Calatayud's documentary “El Fabuloso Sabicas” was shown. 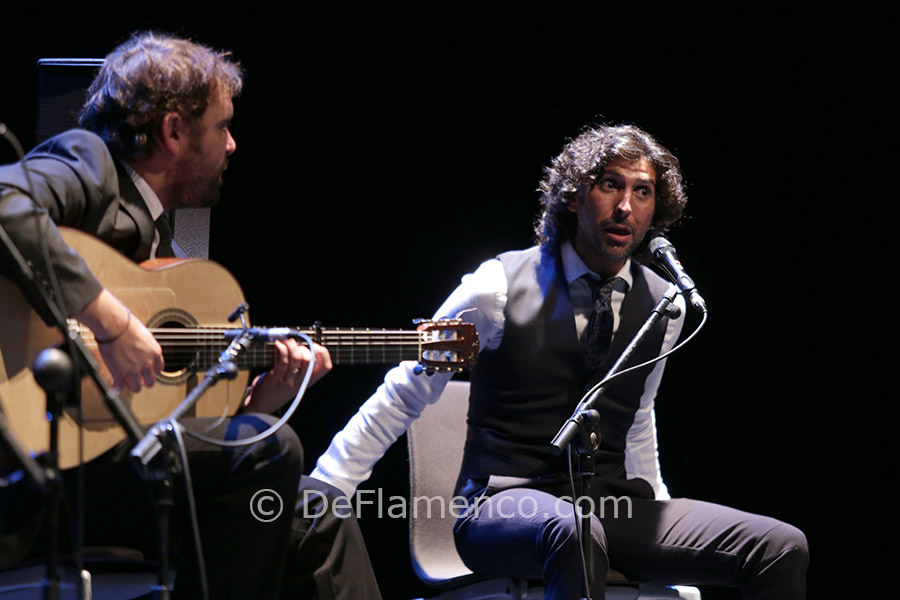 In the evening there was a double feature of flamenco singing, Arcángel and José Mercé, two stars of the current flamenco scene.  The former, at the Flamenco on Fire auditorium with seating for 444, about three-quarters full, offered a recital of classic flamenco singing backed up by two fine guitarists, Dani de Morón and Miguel Ángel Cortés, first with one playing, then the other and then both.  Arcángel, with his right arm bandaged as the result of a domestic mishap, was impeded in his gestures, but not his voice, one of the most unusual and expressive in flamenco.  He sang malagueñas, soleá, seguiriya, tangos, bulerías and his outstanding fandangos.  A tribute to Sabicas by both guitarists was especially applauded by the audience who gave the Huelva singer a standing ovation. 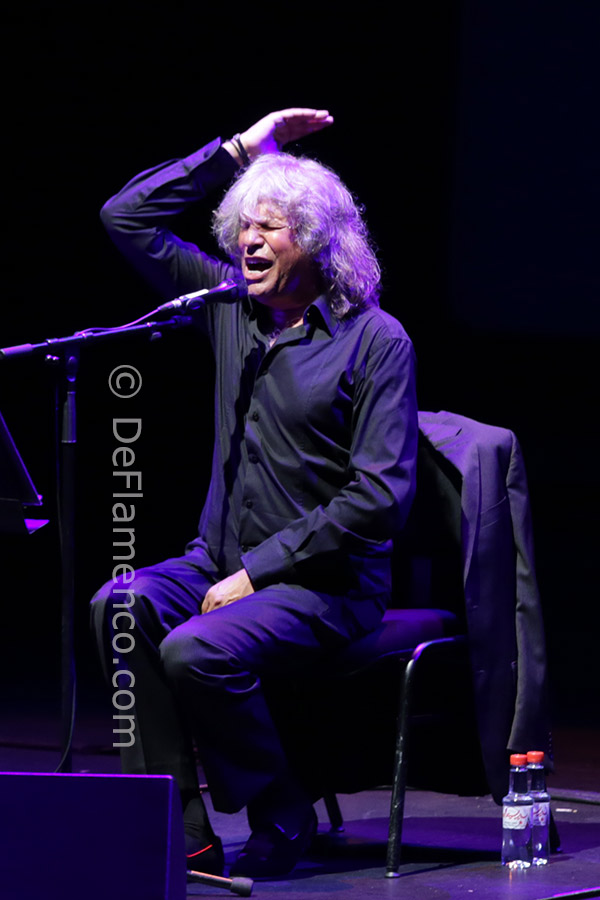 The mere presence of José Mercé is enough to fill a stage.  He did his concert in two parts, first traditional cante, malagueñas, soleá, seguiriya…accompanied by Antonio Higuero on guitar, then summoning the rest of the group for alegrías, tangos…and what has become his theme song at concerts, “Al Alba”, inviting the audience to sing along and clap.  One thousand two-hundred spectators were enthralled with the Jerez singer, and repeatedly asked him to sing his hit songs “Aire” and “Al Amanecer” which got the audience into a state of euphoria, followed by the classic encore with the dancing of a José Mercé in top form. 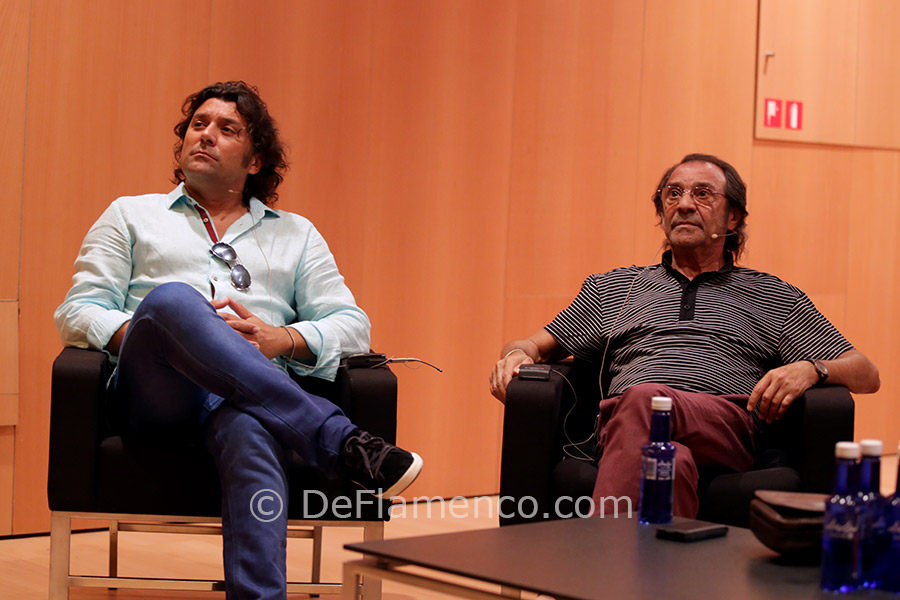 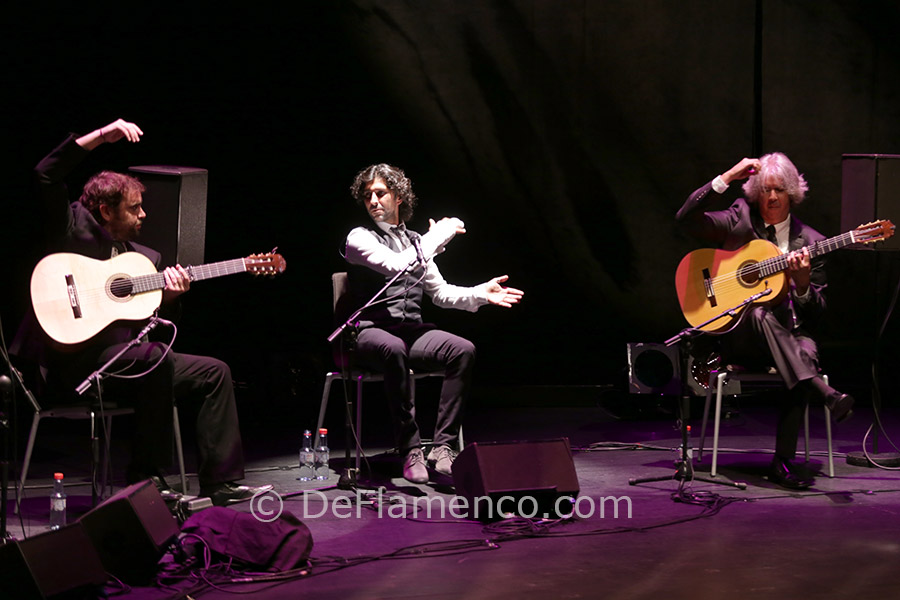 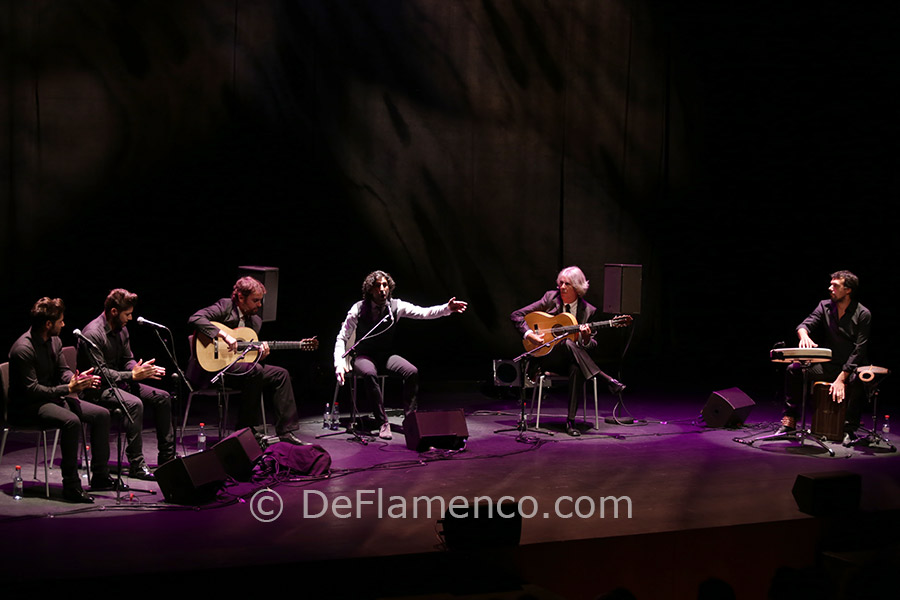 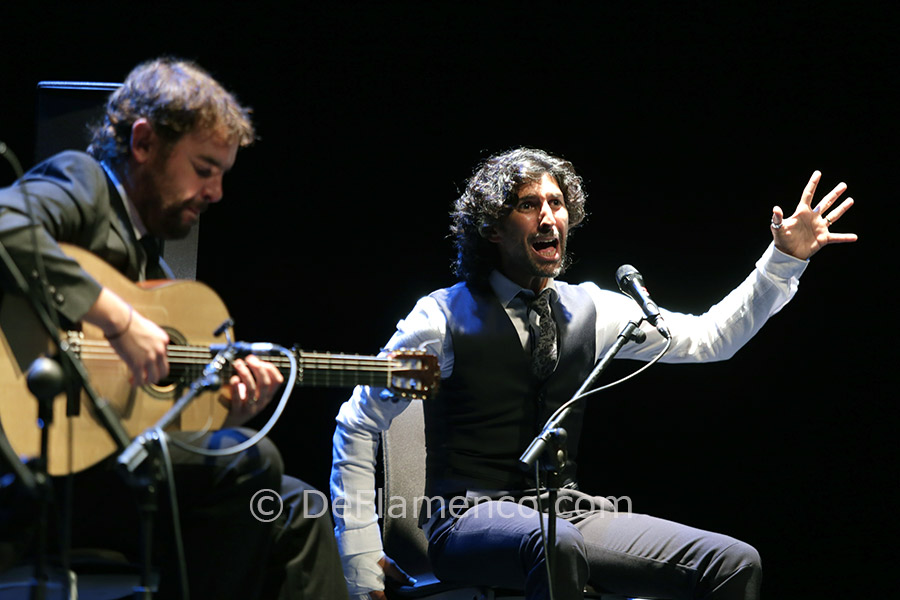 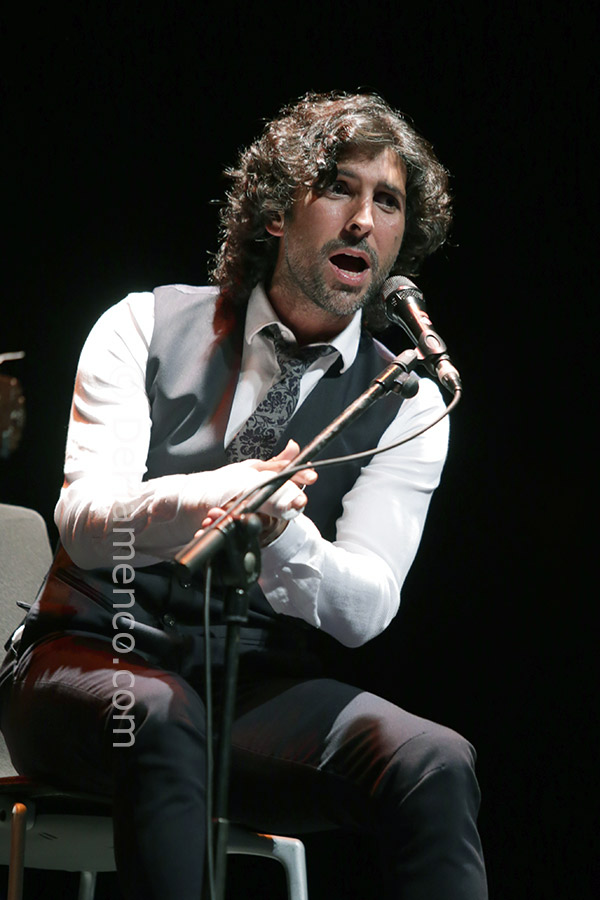 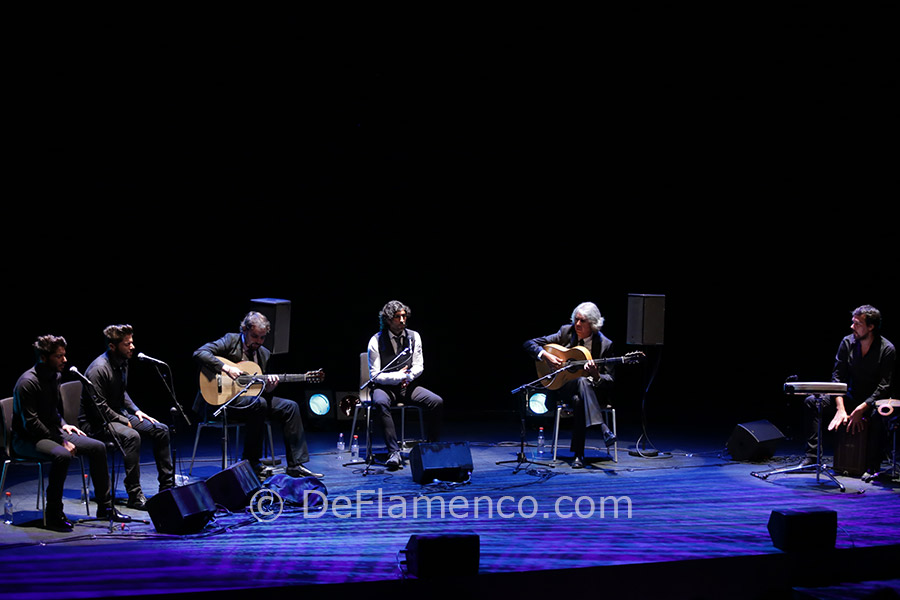 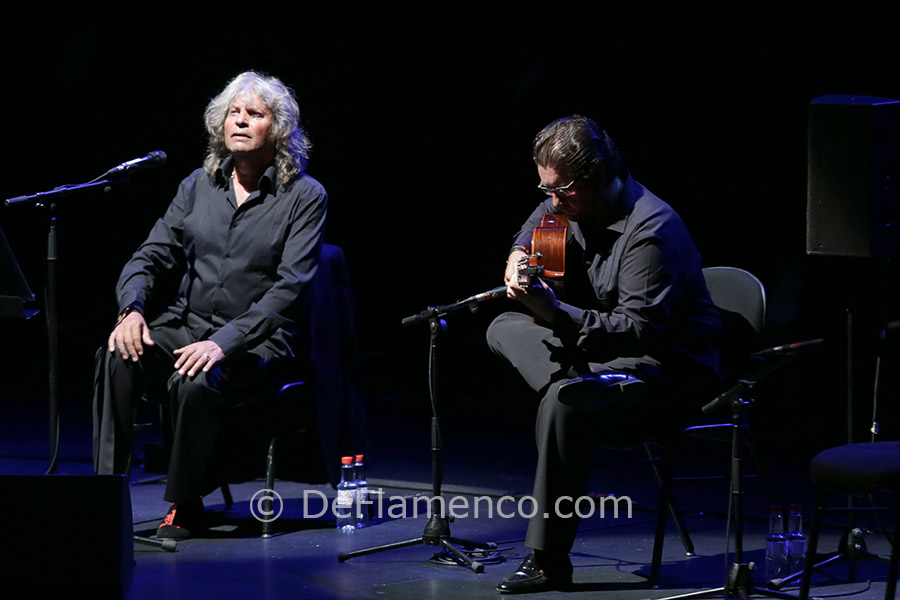 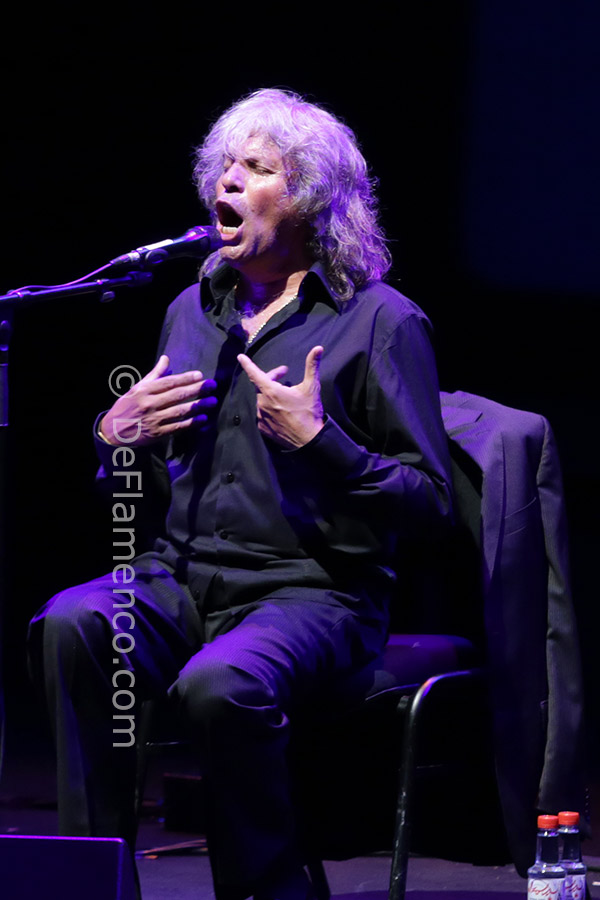 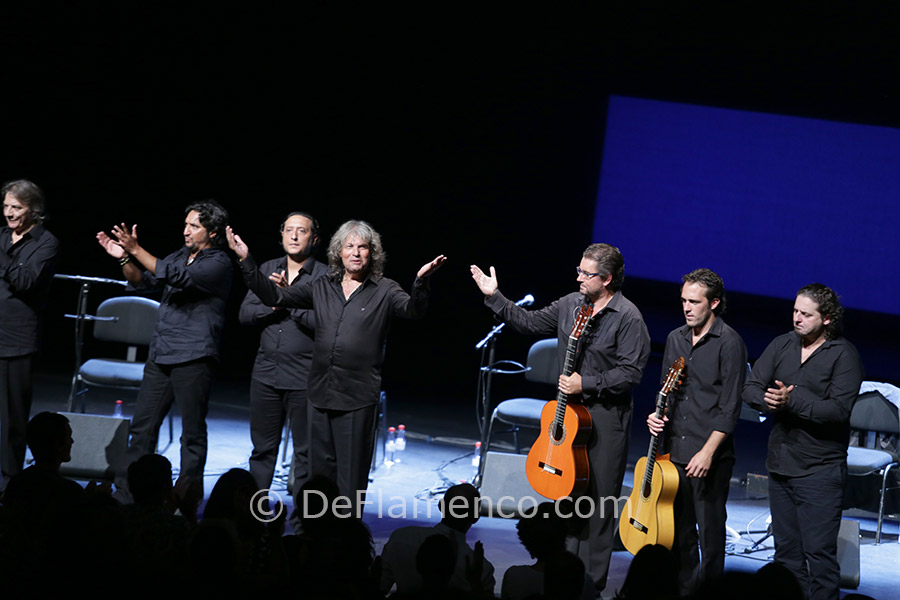