We met with Granada singer Gema Caballero in her hometown, at the foot of the Alhambra, to talk about her first recording and chat about flamenco in general, her career and her interests.

Everything is reflected in this recording; a carefully-crafted record with regard to the selection of cantes as well as the back-up artists.  Gema has chosen to record at a time when self-produced recordings are the best option, or you have to be fortunate enough to have the support of Antonio Benamargo in the production, along with executive producer Francisco Caballero.

The issue of Enrique surfaces from the beginning of the interview…

Well, I don’t want my record to sound like Enrique, I want to put my own personality, but if it happens to sound like him, great.  For example the granaína, it’s mostly Chacón, although there are elements of Enrique.  The record he made in honor of Chacón is one of the best he made.  I really liked the second verse on the recording, and chose that.  It’s true I could have done more in the way of Vallejo but no, there’s more Chacón and Morente.

In Granada I was a flamenco singer, period.  After arriving in Madrid I started to do festivals, but once I settled in, it was necessary to start singing for dancers.  I’d been in the Nou Barris festival, and some other festivals with important artists singing on my own, but in the capital I had to change the chip.  Singing for dance was very enriching, it gave me needed experience, a lot of security; working with great artists was very good for me.  I have no regrets about having sung solo, and afterwards for dance.

Are you the kind of singer who listens to the record over and over to see how it came out?

[Laughter].  Yes and no.  At first I didn’t listen to it, but now I have to in order to find mistakes, and I’ve found them.  As far as the record, we started working on it in August of 2011, but then I went on tour, I returned in December and later on finished the rest.  I sat down with Benamargo and we decided which cantes to do.  At first I wasn’t convinced about recording in such a short time, but I also knew if I didn’t get on the stick, I’d never get it done.  So I jumped right in at the deep end.  This was also thanks to Pedro Barragan of “El Dorado” who insisted on doing this. 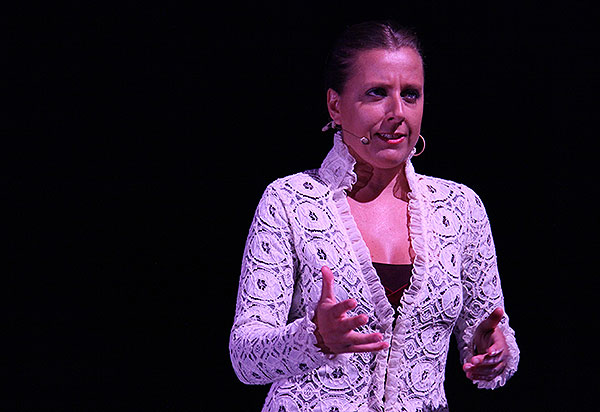 “Artistically, since starting out, everything has gone slowly.  I’m a little shy and withdrawn, it’s hard for me to ask favors, but it works better for me like that.  Step by step, like the title of my record.  This is a slow process, because that’s my way.”

[Laughter].  That’s how I am, like all performers I feel insecure at times…any artist who says they don’t feel insecure is lying.  It’s possible this record should have been made more slowly, but we did it.  Artistically, since starting out, everything has gone slowly.  I’m a little shy and withdrawn, it’s hard for me to ask favors, but it works better for me like that.  Step by step, like the title of my record.  This is a slow process, because that’s my way.  I started out dreaming of becoming a singer, being able to make a living singing, it’s so incredible.  Not everyone can devote their life to something they enjoy, and much less coming from a family with no flamenco tradition, but I loved this and fought for what I wanted.

And it’s been worthwhile…

Hmmm, not necessarily the record, everything I’m doing is on my own.  I made this recording on my own.  I had some help, but there’s no one better than yourself to get things done.  One recital has come so far, but it’s too soon to tell if anything is going to come of the record.

”I’d been doing bulerías with a company, beating out rhythm on a table, and I wanted to find something similar yet different.  Upon investigating, I discovered that bakers also marked rhythm on the table as they worked.” 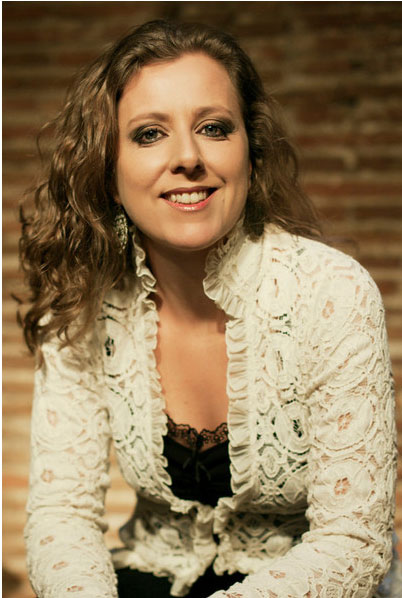 I’d like you to run down the list of what’s on the record, your reasons for choosing some cantes over others…

Well, the milonga is an adaptation of Pepe Marchena.  The cabal of Silverio for example, I took directly from Enrique.  In the granaína we were talking about earlier, I didn’t do any introduction for the record.  I have a thing about openings of cantes.  Already the granaína with the media granaína are very long, and I preferred not to elongate it more.  In the guajira, I took the first verse (‘Es la vida del artista’) from Jacinto Almadén, although the music is a version of Pena Padre.  The panaderas are a Castillian worksong.

It’s a typical worksong people beat out with their hands on the table.  They would fill the table with flour and knead the bread, the work of kneading.  This is a folkloric song.  I decided to do this because I wanted to do something with rhythm.  I’d been doing bulerías with a company, beating out rhythm on a table, and I wanted to find something similar yet different.  Upon investigating, I discovered that bakers also marked rhythm on the table as they worked.  I liked it, so I did it.  I did it in Sara Calero’s show and recorded it.

I like the free-form cantes, but also tangos.  As far as festive cantes, there’s really only the tangos, little else.  The idea of singing “Cortando la Rosa” was because since there was no bulería to close out the record, I recorded that little bit with the chorus at the end.

I already had the tangos in my head.  They’re from Tremendita, and when I thought of doing something that would sound like Granada tangos, I asked her to come to my house and that’s what came out.  The different variations is what Rosario contributed.  That was just when Morente died.  I didn’t want it to seem like I was capitalizing on the moment, nor did I want to put anything “dedicated to Morente”.  I wanted it to sound like Granada and to express in the chorus how I felt about what had happened.

In other cantes, like the soleá, I had considered other options, other styles, but in the end I recorded it like that.  I wanted to do something from Triana, a little apolá, but when I got into the studio I recorded those styles.  The hardest thing was the soleá and the siguiriya, because the studio is very cold.

My idea was to have only cante on this record.  I’ve sometimes been typecast as an unorthodox singer for having done some arrangements.  I always try to do what the historic singers did.  There’s nothing more modern than them.  My references are mostly people who are no longer with us.  The historic singers are the ones who bring freshness and a modern feeling, they do things that sound very contemporary.  I draw from Cojo de Málaga, Valderrama, Niña de los Peines, Pepe Marchena, Caracol, etc.  And those are the voices that suite mine.  I discovered Pena and I love him, I’m listening to Mochuelo, Peluso too…  I also listen to current singers, but I don’t do their cantes.  The mistake young people make is they draw from other young people, I’ll never understand it.

When I started out in the Realejo, with Manolo Ocón, I went to learn cante every Friday.  The first people I heard were Enrique and Camarón.  But from then on, I became familiar with the historic singers.  It was my love for flamenco.  What is born out of love, you can always tell, it touches you and what works works.  With no family background, my love of flamenco came about because cante communicated something to me.

And you have the collaboration of a poet…

That was thanks to Pedro Barragán, they’d worked together and he told me it would be possible.  I was honored, just think, Ortíz Nuevo.  In the end the Trobo is what came out, because it’s very short and has a lot to say.  The taranto is also a wink to Enrique’s cante.  The cante sounds like him, and yet doesn’t…I tried to do it my way, bringing my personality to it.

And what can you tell me about the musical accompaniment?

Pedro Barragán was in charge of the musical direction.  I included Eduardo Pacheco for two pieces, but the arrangements are Pedro’s and mine.  He’s been accompanying me in recent years, and his playing is very enriching.  I’m also accompanied by Sergio Menem on cello, the percussion of Kike Terrón and the palmas of Vanesa Coloma and La Popi.

Listen to fragments from the record “Paso a paso”