After four intense weeks and eighteen dance shows, the doors of the Corral have closed on this fourteenth edition.

An edition which met the challenge of being one of the best dance festivals in Spain, and the best in Granada. Briefly analyzing the series week by week, in nearly each show there high and low points. And there were some memorable moments of great creativity.

The week began with Murcia dancer Cynthia Cano. The result of her performance barely went beyond the girl’s own intentions and the poorly chosen backup cast a shadow on the entire evening. Singer Gabriel de la Tomasa was competent and little more, but Juan Jiménez was a shouter who tried to occupy the spotlight in soleá por bulería. The guitars didn’t have a good night either, and if anything they did better individually than as a team. With regard to Cynthia, she has evolved admirably. A varied composite that went from trilla to seguiriya, with a change to abandolao and out of compas “Anda Jaleo” to bulerías, all in one sequence, set her off showing the brilliance of her feet and the elegance she has moving around the stage. Nevertheless, the excessively twisted grimace she applies is off-putting for the audience who failed to discover her virtues such as the use of folkloric moves taken from folk dances. In taranto, alegrías and soleá it was more of the same. Good castanets, bata de cola and shawl, superb command of the footwork and over-the-top facial expressions.

Anabel Veloso came from Almería to show that the well-conceived trinity of cante-dance-guitar is the best script for success. For Anabel, it’s a fait accompli. And not only because of the smart composition of her group, but the forms she chose to show what she’s got to offer. She added the flute, sax and harmonica of Diego Villegas, which rounded out an excellent performance. Three choreographies for three dances, each one well-thought-out, both in length and content. She began with guajira, short and intense. The fan and the bata de cola are both traditional in this musical variant, but there are ways of pulling them off that make the dance different. Anabel has the ability to be figurative without resorting to excessively hackneyed aesthetic elements such as the overuse of certain techniques to get easy applause. And therein lies her quality. From the impeccable tangos of Naike Ponce’s singing, to Anabel’s dancing in the soleá, and the taranto of Coloraíto. A very harmonized guitar solo with bossa nova-style arrangement and the accompaniment of the flute of Diego Villegas who was magnificent throughout the show, and as the dancer pointed out, in the end, everyone came out a winner. She wrapped up with alegrías with the same formula used in the rest of the show, with tight, mature, controlled dancing.

On Wednesday we saw a familiar face at the Corral. For the second year in a row, Lidón Patiño came to show her stuff. Despite her youth, the girl from Castellón has great virtues. She fills the entire stage with ease, using plenty of armwork, and has some good closings, whether it’s taranto, tangos or alegrías. The singing of Roberto Lorente, well-tuned and sweet in the bambera, was counteracted by the vidalita of Saray Muñoz, out-of-tune and much too loud. For a closing, Patiño played some very strong and expressive alegrías.

Granada dancer from the town of Santa Fe, Luis de Luis, had the responsibility of closing out this edition of Los Veranos del Corral. Most festivals devoted to dance, choose major shows to open and close each series. Probably to open with optimism and close leaving a good impression to bring people back the following year. Luis de Luis is one of those artists who could be among the most elite dancers. And if he isn’t, it’s because he doesn’t want to. He has such a big personality that when he begins, the first thing you think is he’s imitating or following the Farruquito aesthetic. But just wait a few minutes and you’ll see his movements tell us he has nothing to do with that. True enough that both dancers have electrifying footwork and compás, but even being so seemingly similar, they are diametrically opposed.

After some technical problems with guitarist Luis Mariano’s microphone, Luis de Luis started with taranto. His dancing is all fireworks, in footwork, arms and body language. He did siguiriya and soleá por bulería with the singing of Juan Ángel Tirado and Antonio Campos, and the guitars of José Andrés Cortés and Luis Mariano. In both dances his feet were intense and powerful, although it became repetitive. Cortés had his solo moment with his guitar, a very long piece but well-executed. Antonio Campos dedicated a moving malagueña to his parents, a cante which was complemented by the malagueña del Mellizo of Tirado and fandangos del Albaicín. 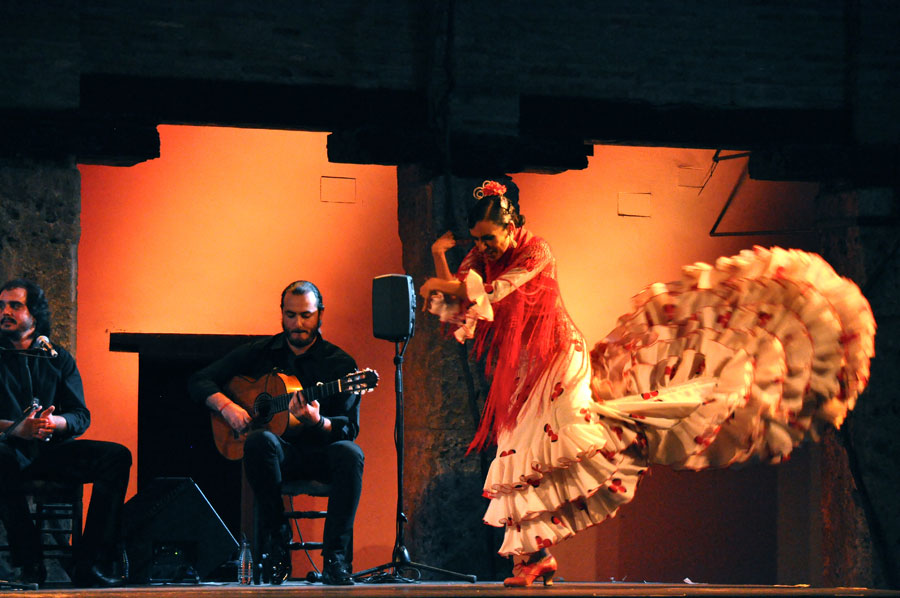 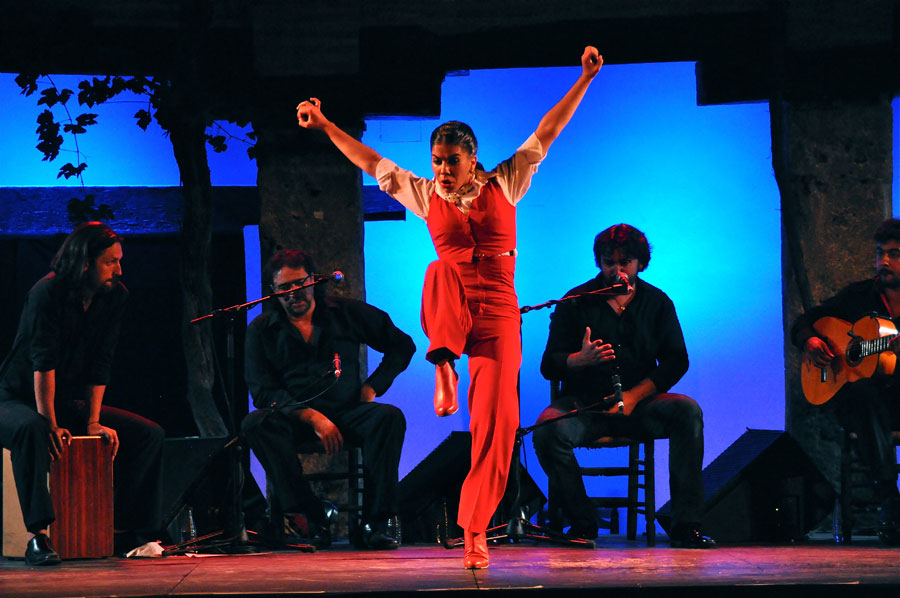 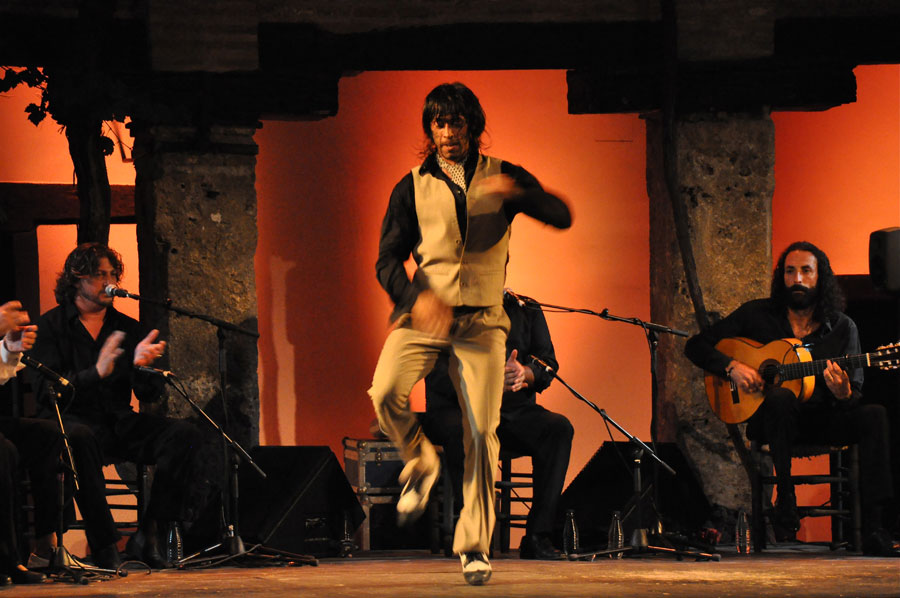 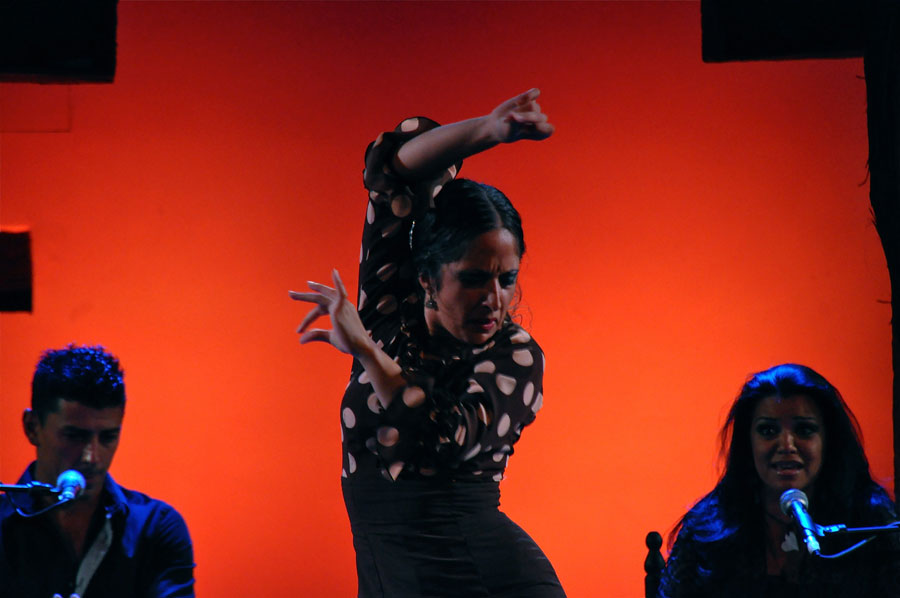