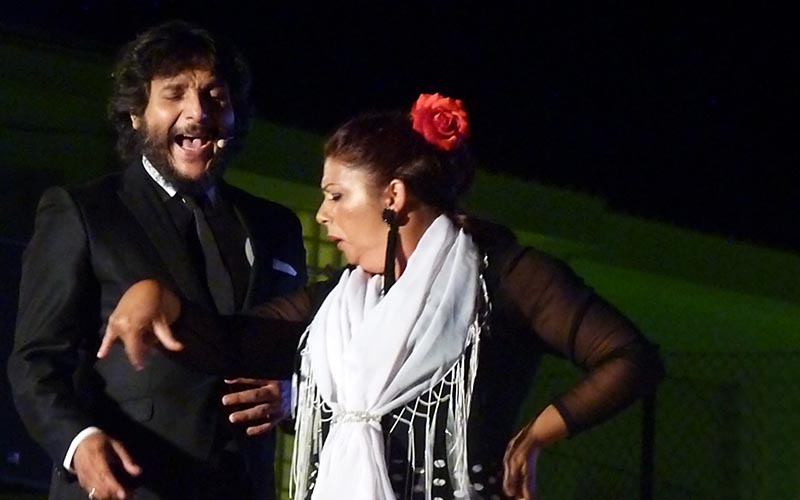 It’s becoming harder and harder to find flamenco festival programs that make you say “wow, what a lineup!” Like many others, the Festival de Cante Grande de Casabermeja, member of the elite half-century club – festivals of this nature that will soon reach their 50th edition, or have already done so – has to juggle limited funding, a shortage of traditional artists and worst of all, the indifference of the public at large in response to possibly outdated forms.

But the flamenco contingent in Casabermeja (Málaga) is determined.  And there’s a flamenco association, Torre Zambra, that defends classic flamenco tooth and nail.  There’s also a man called Alfonso Queipo, incurable flamencoholic, who’s been cultivating and supporting the art-form for decades, and who directed this festival following established customs while retouching here and there to freshen up the format.  Something so simple as opening with the principal singers facing off with bulería por soleá, or the micro Málaga symphony of Antonia Contreras who began with a verdial, moving on to the rhythmic malagueña of Juan Breva and ending with a free-form malagueña of la Trini, instead of the customary reverse order, thus reflecting the true evolution of these forms.

“Honores a Antonio el Rubio” evoked the repertoire of this bohemian singer from La Línea via his son and daughter, and the charm of their unschooled delivery, free of contrivances.

“I’m from Álora, birthplace of the malagueña” declared Antonia Contreras, the most recent winner of the Lámpara Minera.  With her sweet voice and lyrical delivery, she lent elegance to serranas, guajiras with carefully administered strength and a retro feel, in addition to the above-mentioned Málaga forms.

Next up, the inimitable Javier Heredia, young maestro of the most authentic festive forms.  Think Paco Valdepeñas, Anzonini and Miguel Funi, and you’re seeing Javier, a compendium of all three as well as others who coordinate singing, dancing and personality in the most ingenious manner.

The absence of the great Manuel Moneo due to health problems – from Deflamenco we send our most sincere wishes for a fast recuperation – was compensated by the raw-edged delivery of Perico Pañero for fandangos de Huelva, siguiriyas and tangos.

Luisa Muñoz, related to the Montoyas, added her canastero sound, that way of singing popularized by Camarón, with notes that come sliding home, or are stretched like warm mozzarella.  Beautifully racial, she sang mining forms shaded in her own way, popular tangos and siguiriyas.

In sharp contrast was José Canela, son of Canela de San Roque and relative of Jarrito and Chiquetete.  His singing was sober and Mairena-influenced in soleá, alegrías de Cádiz and bulerías, exhibiting great knowledge of the forms.

Dancer Patricia Valdez, with the young Jerez singer, Manuel de la Nina and guitarists Juan José Alba, was followed by her husband, Antonio Reyes, who was presented by Manuel Curao as “the singer most in demand at the moment”.  The man from Chiclana, whose style is a wise mixture of Mairena, Caracol and Camarón, once again won over the audience with his toasted caramel voice and popular repertoire.

A string of guitarists as noteworthy as well as varied: Diego Amaya and Juan Ramón Caro whom we see too seldom, Antonio Moya, defender of updated purity, Daniel Casares, a concert guitarist who has no problem accompanying singing, and the Jerez maestro, Antonio Higuero.

The second part was a long fiesta finale with all the artists, some twenty people I was able to count, taking turns with a variety of forms.  There were words of praise from many for guitarist Quique Paredes who passed away a few days ago.

Drink coolers everywhere.  You could talk about two kinds of festivals, those that allow and encourage bringing food and drink, and those that prohibit so much as a little bottle of water: a “flamenco event” in the broadest sense of the word, as opposed to a “theatrical event”.  The homemade broth, the branches of aromatic herbs strewn on the ground in the surrounding streets, wine, cured ham, omelettes, singing and an audience as fond of flamenco as they are respectful of the interpreters.

Round about 5 in the morning it came to an end, the lights were turned up, but not everyone felt like leaving the flamenco dream, and there was a long informal jam session, just as there always used to be. 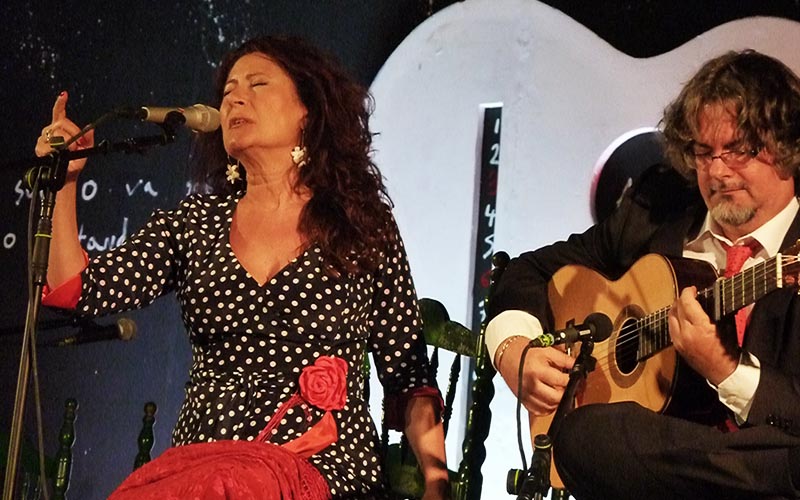 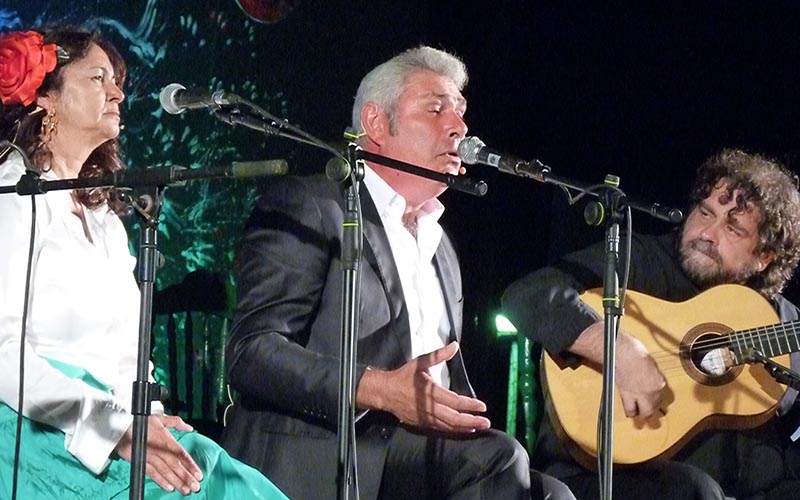 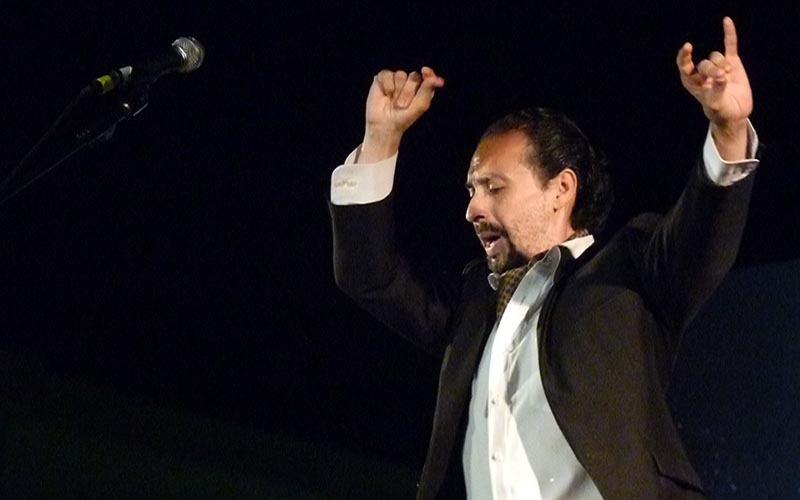 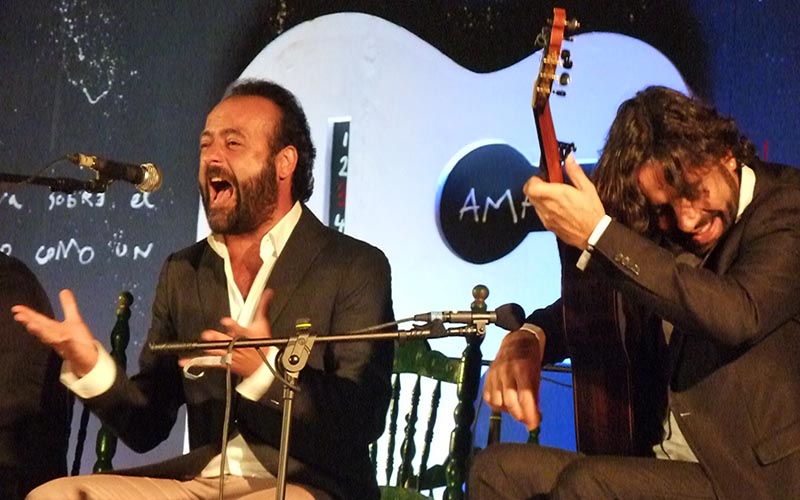 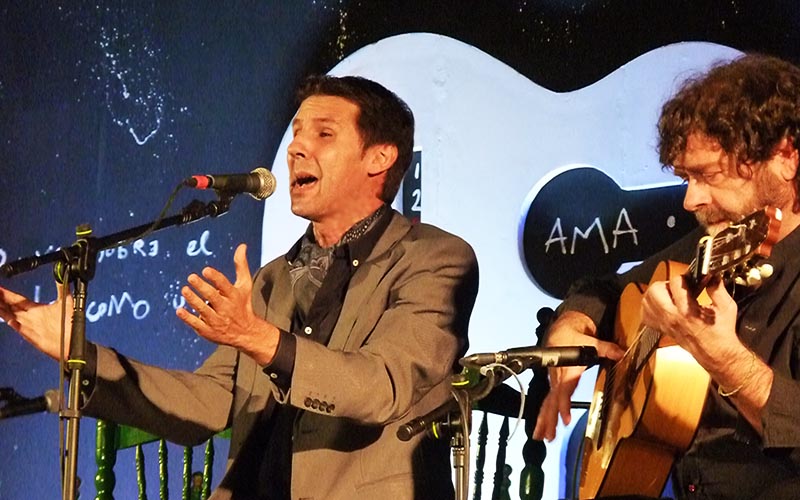 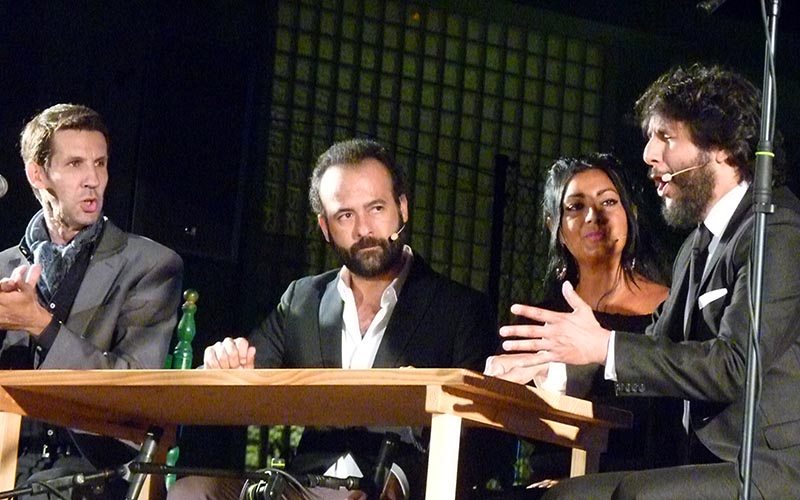 Gema Caballero: “The hardest thing in flamenco is to find your identity without getting carried away by fads”