A traditional Jerez zambomba moved to a Madrid venue was the closing of the annual program at the García Lorca room of the Casa Patas Foundation, that boasted a “sold out” sign weeks before the special occasion. 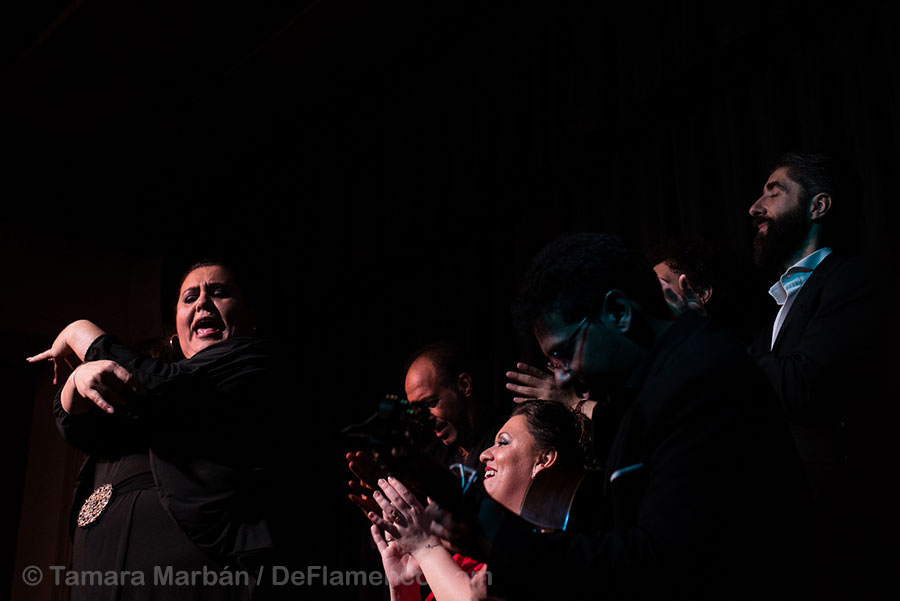 I hope it’s not out of place to say that the people present were as glad as I was about the genuine capacity of Jerez to draw you into their zone and pass through the historic filter any human vestige, no matter how small, and turn that which is solemn into almond candy without refined sugar, and without losing – quite the contrary – their tenderness nor, much less, the beat.  And I say the genuine capacity of Jerez, as if the city itself had that gift. We all know that’s not how it is, which is where it gets tricky: how to explain it.

Let’s just say that from the expressive richness and diversity of Jerez, are born infinite, poetic (and redundant) ways of supporting the narrative of the birth, in a doorway smelling of rosemary, of a being whose calling was to save humanity.  And the technical resources – vocal, musical, lyrical – and the senses, which the rest of the year tell of unpleasantness and sleepless nights of mortals, put themselves at the service of narration, thanks to the zambomba, a divine birth, with all its details and ramifications.

The evening, nearly two hours in all, including intermission, was divided in two parts: the presentation of Jerez singer Pedro Garrido Fernández, Niño de la Fragua, who was performing at Patas for the first time and directed the second part which was all about Christmas.

You could hear Pedro’s fatigue, which is only normal at this point of December after a long series of Christmas recitals, and even the dryness of the response to his bravery by the previously unknown (to him) venue, all these things took their toll. Madrid is an important place to perform, and the García Lorca room (which Antonio Benamargo has been programming for years), is known for a level of refinement and a demanding audience.  He eagerly took on forms from the bay of Cádiz (alegrías, cantinas and romeras), he bided his time in the siguiriya which is so his and caused him so much pain, he was uplifted in the fandangos and ended with bulerías.  Exhaustion ran its course, and he gave in to it, and anyone who so desired could see the quest for a singer’s vital space: the path to understanding one’s own throat in unsuspected challenges.  Not feeling secure, he paid the price with sweetness, and never strayed from the classic line learned from Tío Juane, his grandfather.  It wasn’t a step back, but rather fastening: if the external thermostat doesn’t heat up, you use your own thermometer, references to childhood, the intimate secure measure that judges and forgives us.  Whoever was there knows this, and whoever didn’t know him will return.

The acoustic condition of the García Lorca room causes sound to reach the audience unwrapped like a piece of lemon candy authenticity, because that’s where you can see the seams, but it’s also the bitter slice for someone singing without amplification, looking to feel good beyond bravura and strength, because the interpreter feels the voice isn’t heard and needs to be forced.  Accompanied by the guitar of Juan Manuel Moneo, who really accompanies, sees and understands who he’s got by his side without seeking the spotlight for himself, and the particularly fine palmas of José Rubichi and Manuel Tarote; as far as I’m concerned, and there goes my daily ration of opinion, the secret of Jerez, the “soniquete” or “soniquetazo”, that ever-present, beautiful and necessary metronome that caresses and stabs.  The give and take imposed by the tempo in their hands, is like a corn tortilla in knowing hands.  It’s walking on a recently mowed lawn.  The ethics of meticulous care.  It’s humidity. And also lust.

That’s what the man from Jerez needed, the very essence of the zambomba – beliefs apart – to weave the net of collective work, of mutual support, of the call to brotherhood.  Eva de Rubichi, Ana and Coral de los Reyes and Carmen Grilo, well-versed in the subtleties that nurture the collective Christmas spirit that turns Jerez, each December, into one great public arena, brought out their wares.  They sang ‘Nochebuena en Jerez’ (a Christmas song with a bulerías feel composed by Juan Manuel  Moneo); they ably delivered a potpourri of traditional Christmas songs, the classic ‘Lirio de los Valles’ and bulerías fiesta finale with Christmas-themed verses.

The repertoire said little when you could see, for example, that the tambourine in Eva Rubichi’s hand could be an olympic sport; she uses it to draw a circle of fire as she looks at you questioningly, and let’s see, my friend, with her dark questioning eyes, what you answer.  That Coral de los Reyes is crowned each time she raises her arms and bends her diminutive body over her own axis.  Elegance that is both old-style and current, but also a rebellious compliment shown to her and her sister – powerful and savage – when they were small, by Julián de los Reyes, their recently deceased father.

Carmen Grilo, in my opinion, turned out to be the guiding force.  Her plaintive sound comes from the very center of the earth, although she herself supremely modulates it as if it caused no pain.  From that terrible place she brings her singing and wanders serene between the two shores.  She took the fiesta finale to its greatest height, and the more she spread open her arms marked by the red fringe of her shawl, the smaller the stage, already small, seemed to become.

El Niño de la Fragua, who directed the group, can be thanked for having the good judgement to choose voices and hands (not in vain did he organize Navidad en el Teatro Villamarta in Jerez in 2016) that turned out to be representative of an open-ended spontaneous fiesta, and its corresponding displacement to a venue that was not entirely natural, and in which there was no room for anyone or anything more.  Nevertheless, we did miss “Sirva tu Cuna”, a Christmas song written specifically for Niño de la Fragua by Fernando Terremoto.

Sirva tu cuna para que el mundo se reúna [Your crib shall be to unite us all], just like Terremoto’s Christmas song states, a verse that he interprets so well nevertheless, the spirit of what was in the air and made us wrinkle our noses with emotion, even those who are basically indifferent to the month of December. 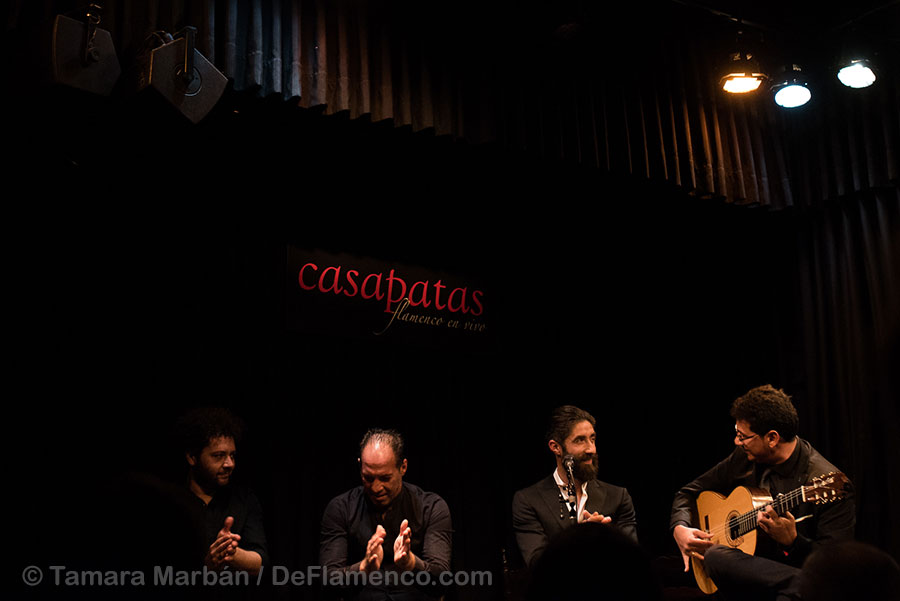 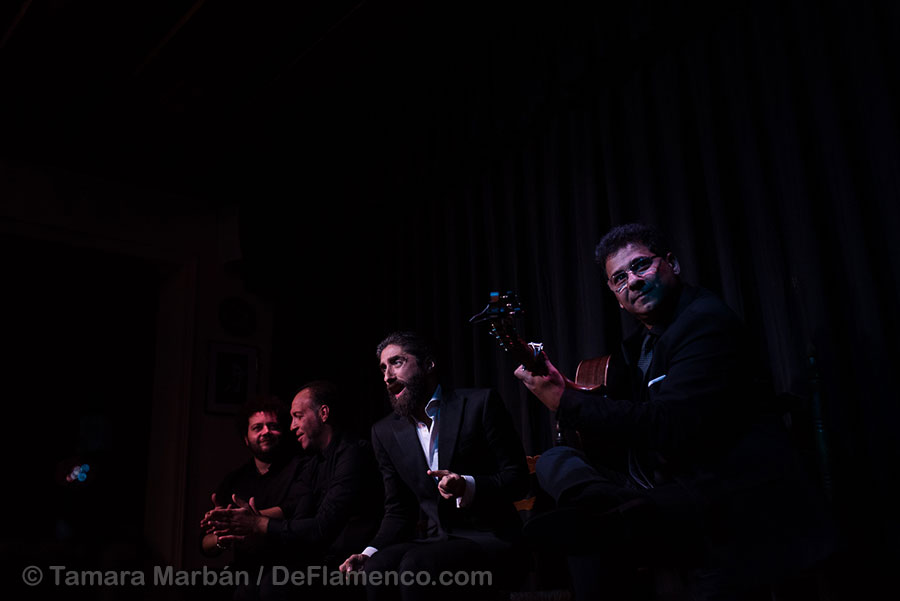 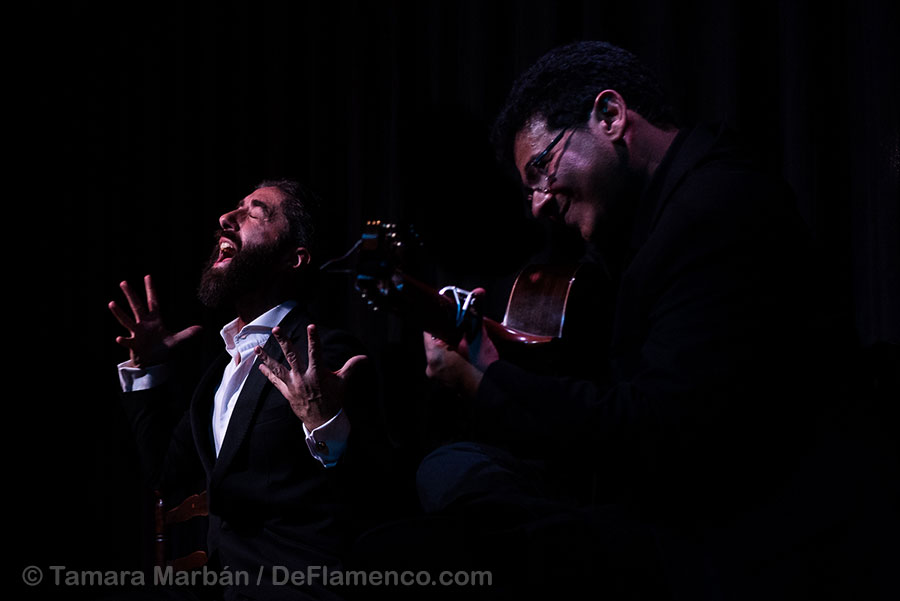 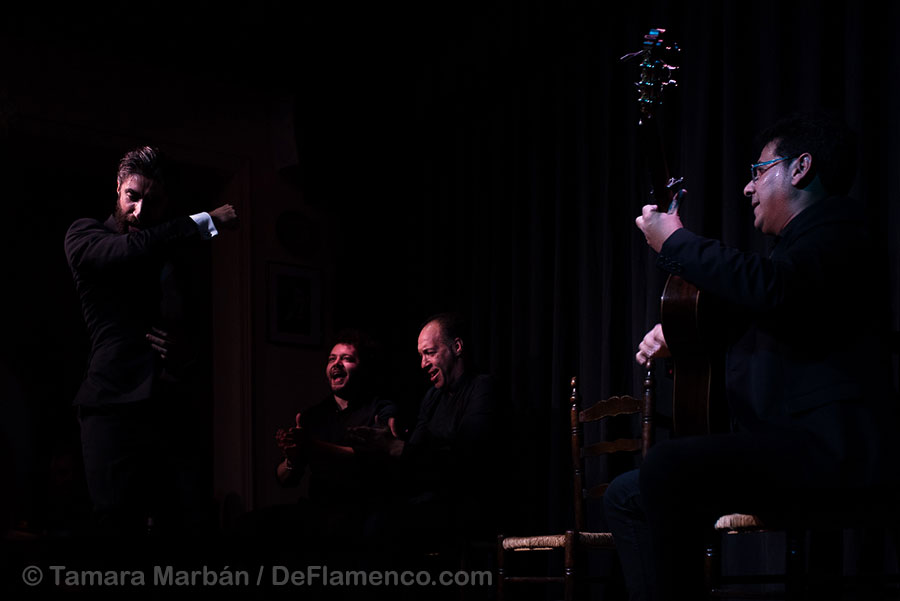 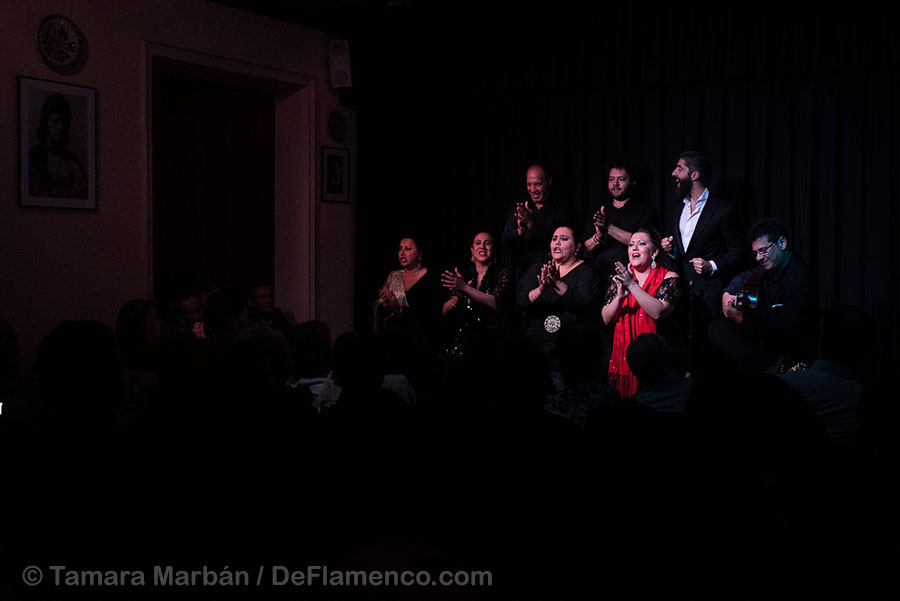 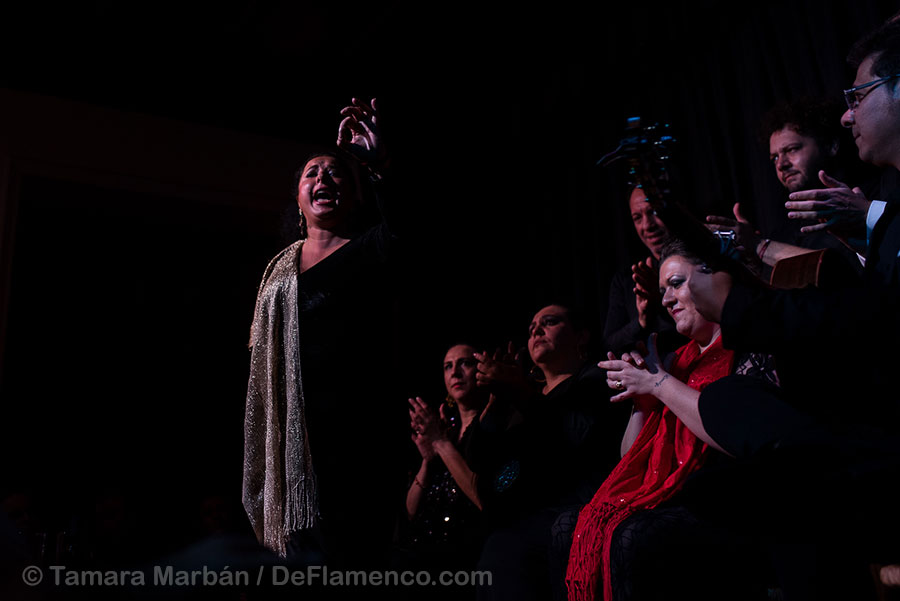 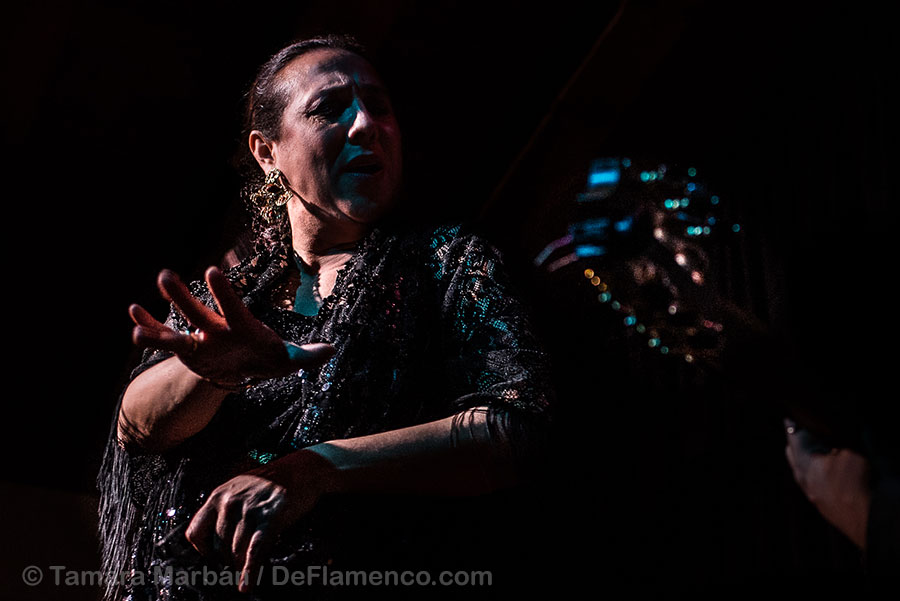 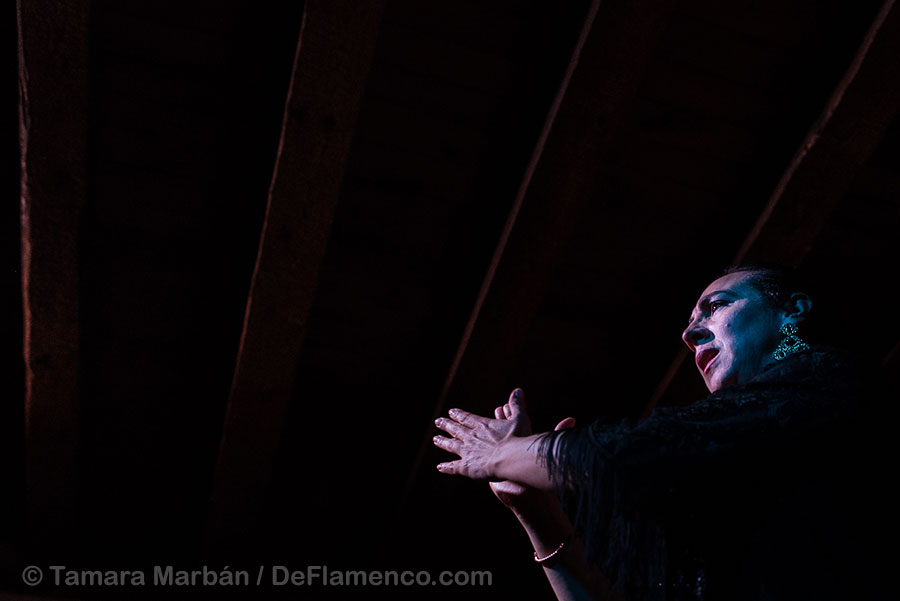 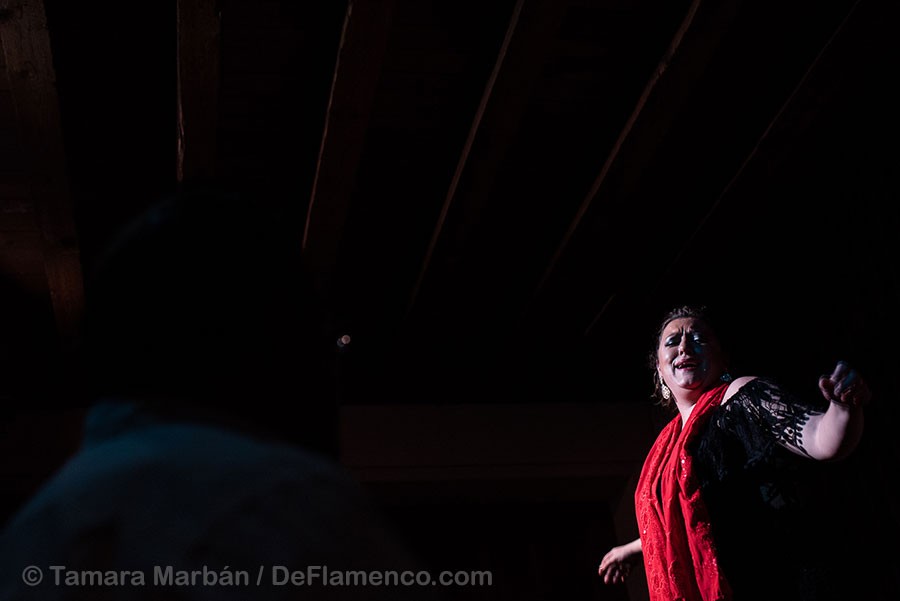 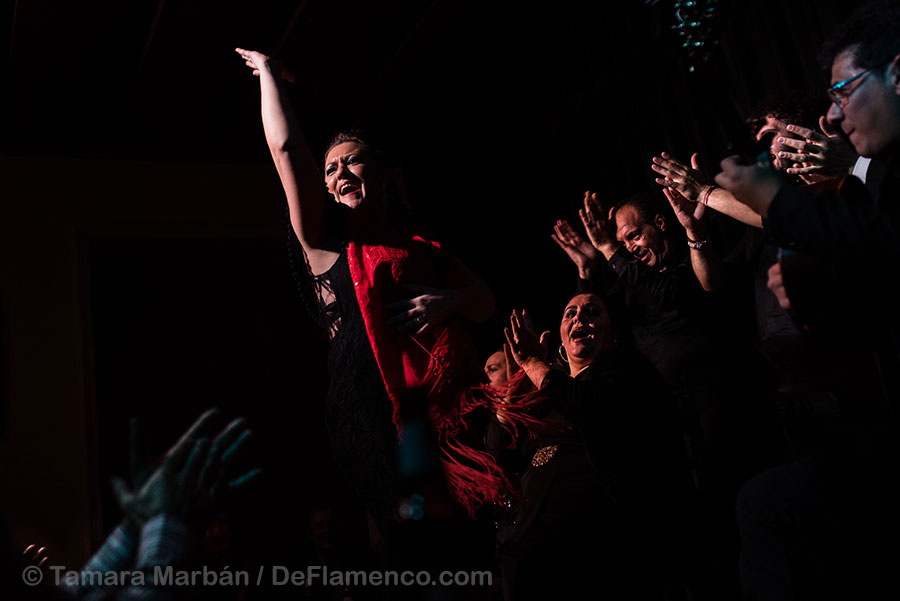 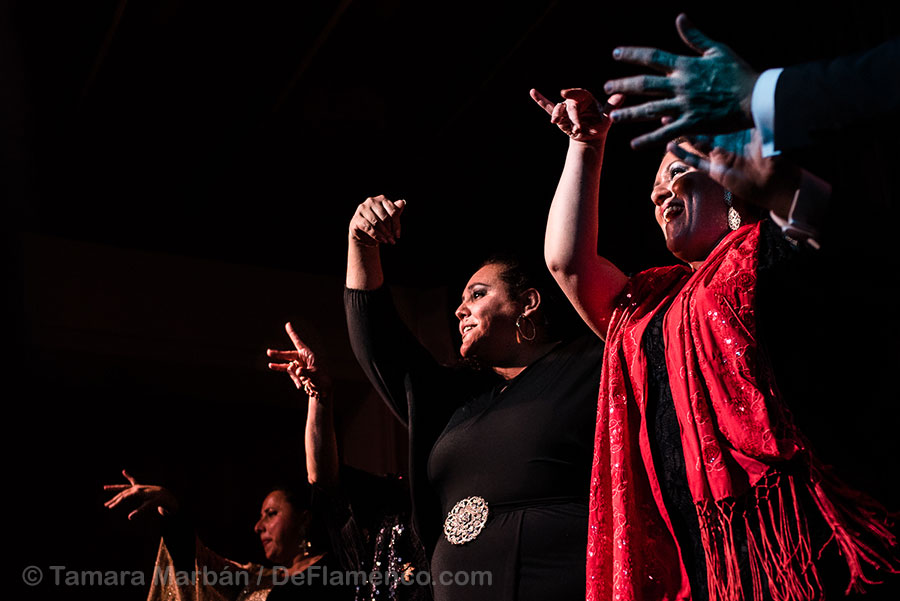 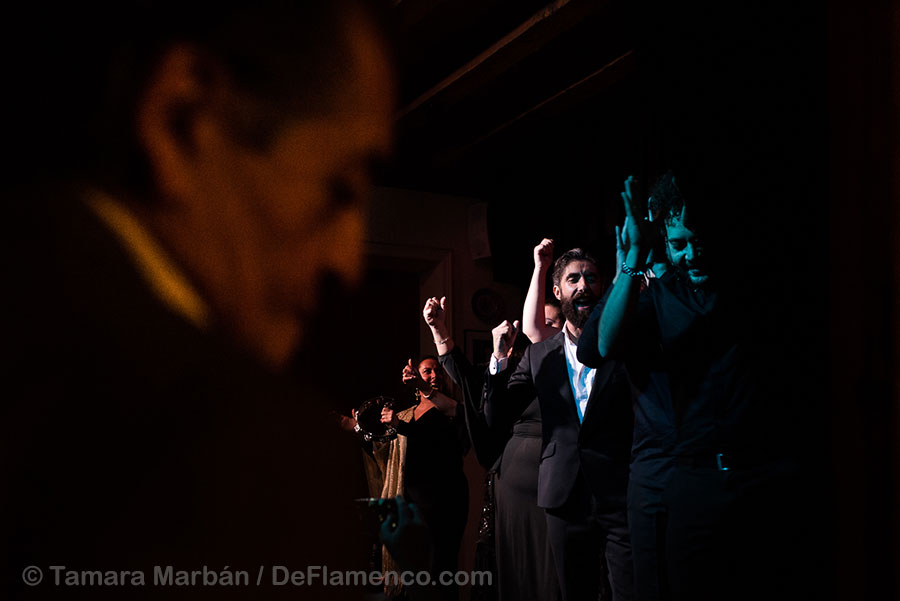