“Mi Tierra” is the title of Mari Peña’s first recording.  In flamenco, we’re always talking about roots and the fanciful tree that traces the traditional forms and the land where it all came of age in the imagination of flamenco followers throughout the world.  So what has the land, “tierra”, got to do with music?

When it comes to flamenco, quite a lot actually.  If the forms are a shared common language, each town has its distinctive repertoire, its vocal placement and it way of moving through the rhythm patterns.  Each neighborhood some would say…in fact, each family.  To say “Utrera”, is to evoke a blessed flamenco land with a clear style all its own.  Here, it’s no longer the angst of Jerez, but rather the ‘duende’, or essence, is summoned with sweet pain that hurts good.

Oddly enough, in Utrera, there have been more female singers than male, legendary cantaoras such as Rosario la del Colorao, Merced la Serneta, La Perrata, Pepa de Benito, Pepa de Utrera or the high priestesses Fernanda and Bernarda, amen.  Now Mari Peña is applying for inclusion in the club, “Mari Peña de Moya” as many people call her, since she is married to the great guitarist Antonio Moya, “who’s to blame for my being who I am today” as the singer explains.  As of now, hers is the only woman’s voice perpetuating the flamenco legacy of this city, her guide and inspiration for the recording she last night presented at the theater of Nimes.

Various collaborations give dimension to “Mi Tierra”.  In addition to the guitar of Antonio Moya (a native of Nimes, settled in Utrera since many years ago), the piano of Pedro Ricardo Miño, the suggestive violin of Faiçal Kourrich who so often accompanied the much-missed maestro Juan Peña “Lebrijano”, the discreet percussion of Paco Vega (“discreet” is the best sense of the word), the dancing of Carmen Ledesma, the only dancer today capable of bringing the straightforward style of non-professionals to the theaters of the world, and the rhythm and choral singing of Rocío del Turronero and Juan Amaya, the latter who contributed his fine artistic madness with a couple of brief dance spots that sent an electric charge through the entire audience.

Hoarse, rough-edged voices so highly regarded in recent times, are no longer popular with the new generation.  In this sense, Mari Peña’s clean sweetness is bound to seduce flamenco followers.  Moya’s guitar manages to balance the most classic style with a contemporary sheen, in just the right degree to make it appropriate for today’s listeners.  The couple’s strong point however, continues to be conventional flamenco.  Notably, soleá in the Utrera style, more rhythmic than phrased, effortlessly incorporating bulería por soleá.

Carmen Ledesma interpreted cantiñas of Pinini, such an integral part of the Utrera repertoire, imbued with the authenticity of Mari’s delivery.  As for Ledesma, she’s always had the custom of not dressing up like a flamenco doll with polkadots and plastic accessories, preferring to wear elegant streetwear, a sort of declaration of intent.

Singers from Utrera don’t much like free-form styles, and the classic 12-beat measure is the oxygen that feeds even fandangos “personales” that Mari sang to the rhythm of soleá.  With the piano, what worked best was tientos, a form Gaspar de Utrera took to glorious heights, and which Mari Peña sang with respect and dignity.

All throughout you feel the interpreters’ desire to present classic flamenco, while at the same time allowing for the freshness of some lyrical songs that never quite reached the level of the flamenco repertoire.  However, two original compositions were jewels.  An Argentine tango crossed with bulerías, subtle fusion made possible thanks to knowledge and good taste.  And the same could be said of the best part of the show, the very effective arrangement of ‘romance’, a specialty of the Lebrija/Utrera axis, with the exotic sound of Kourrich’s violin that gave a distinct Arabic feel.  Beautiful. 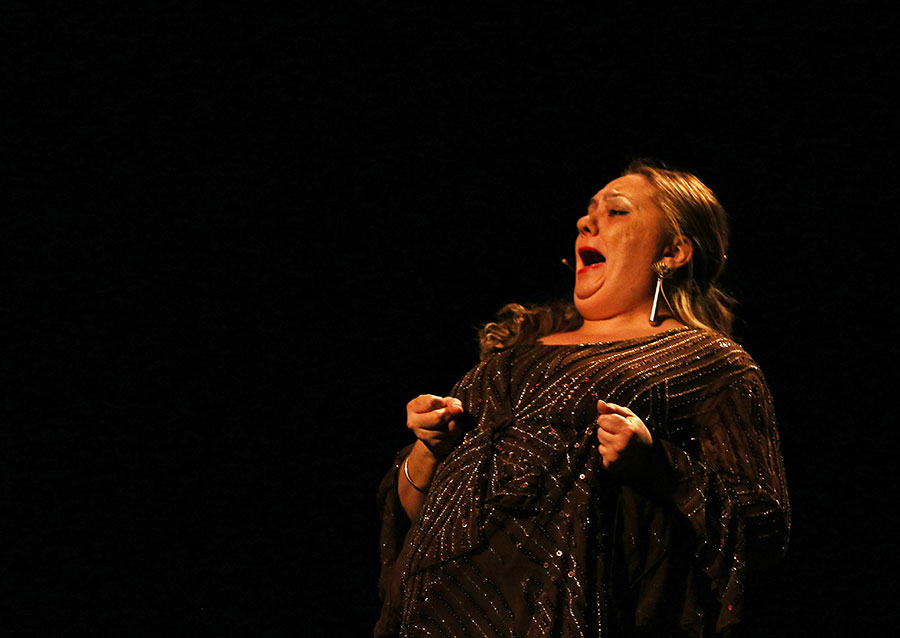 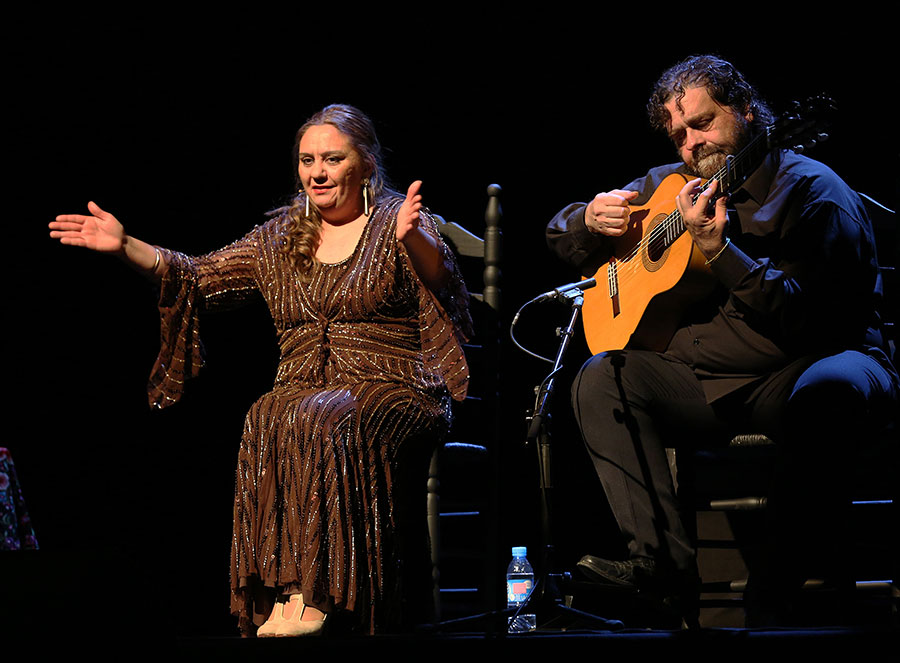 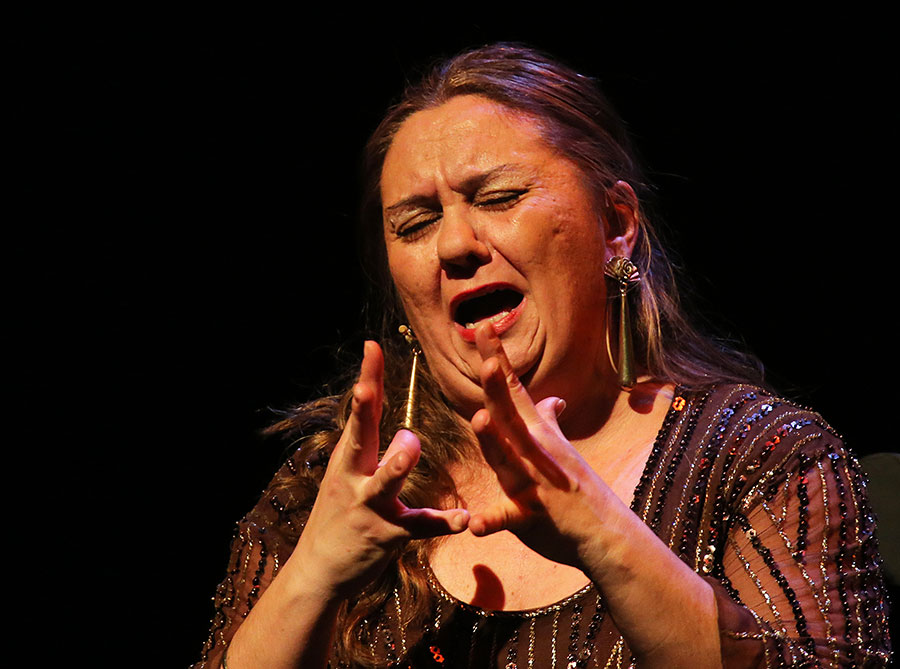 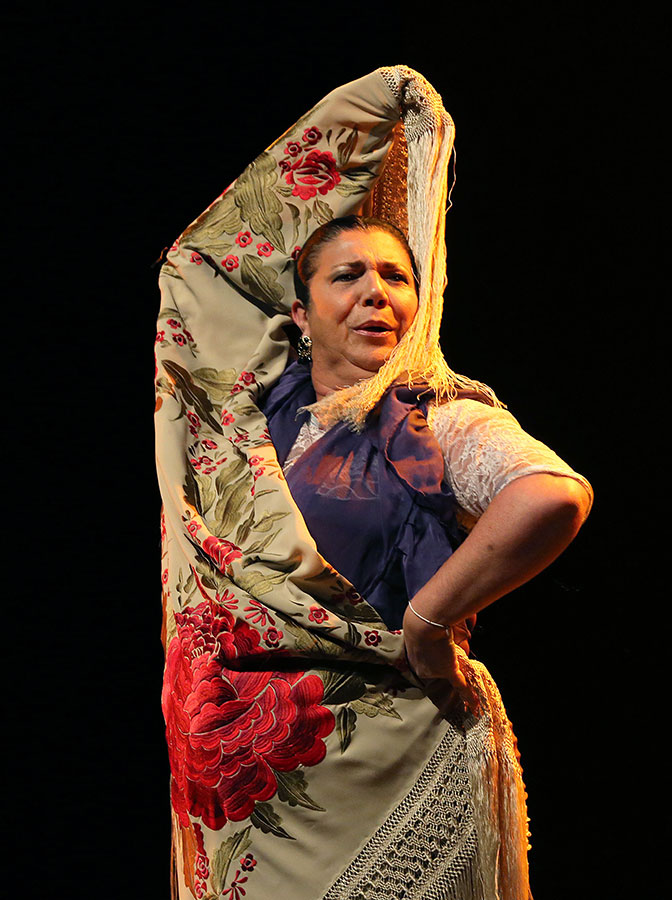 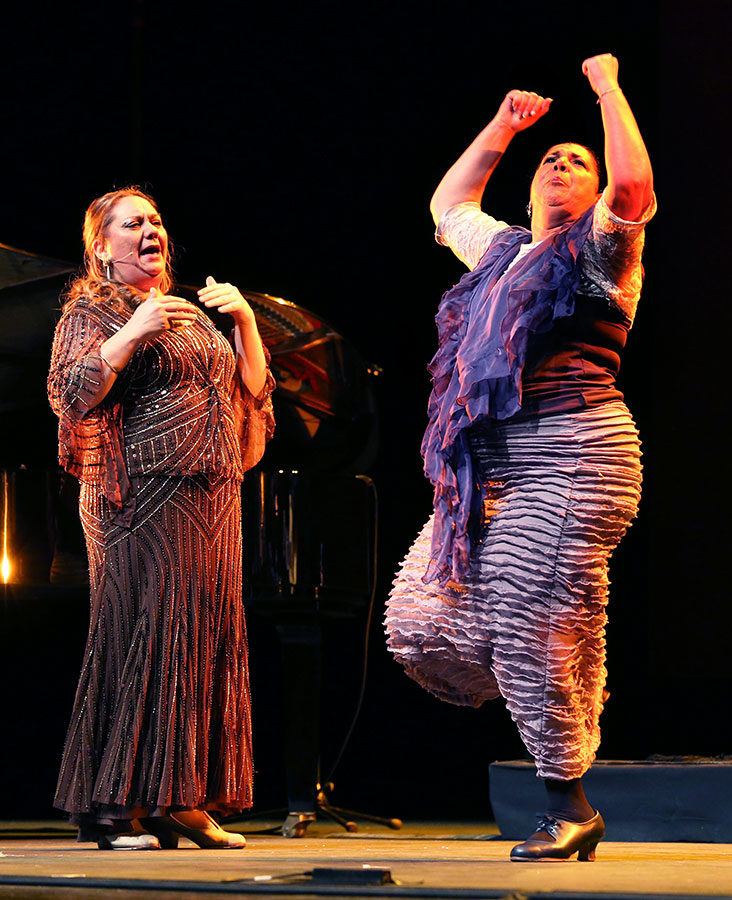 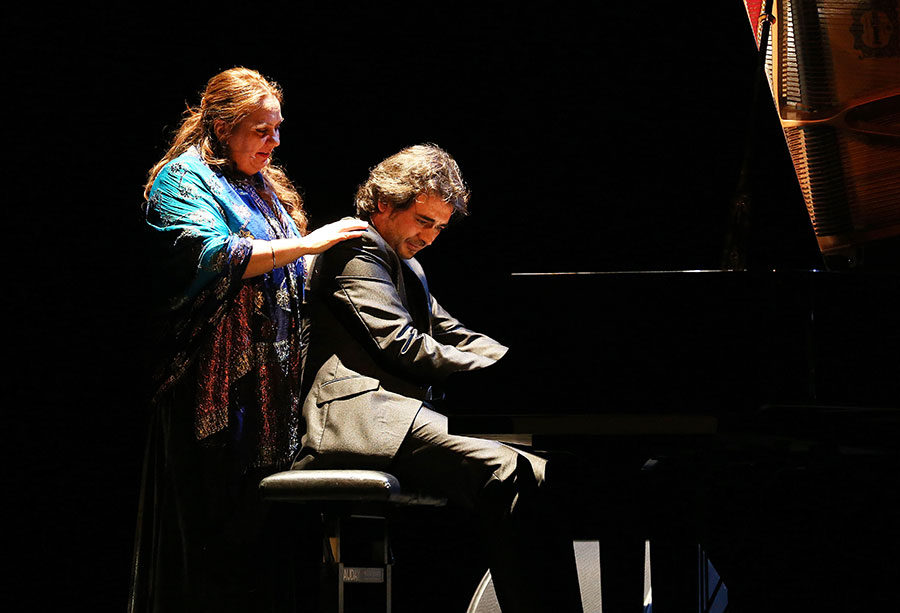 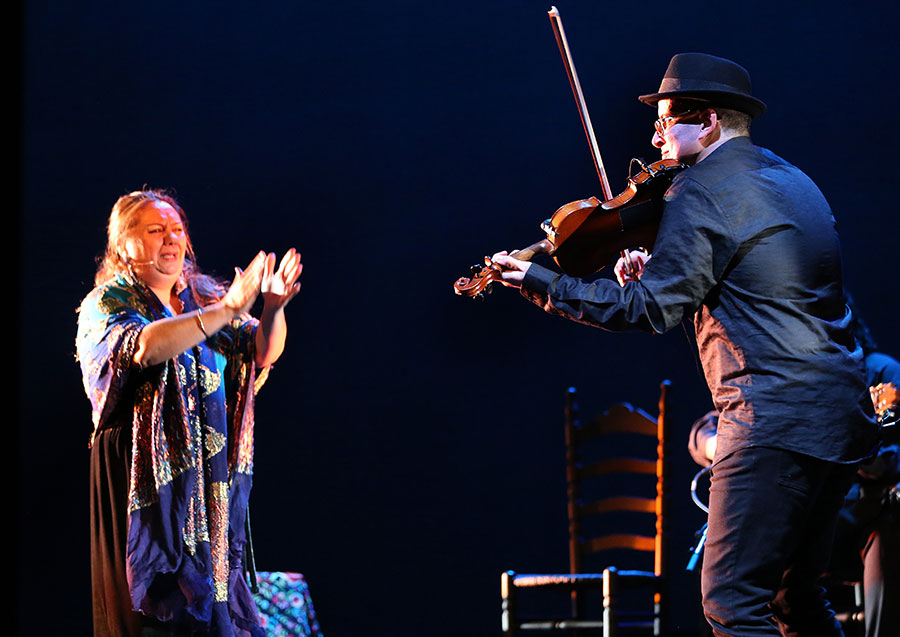 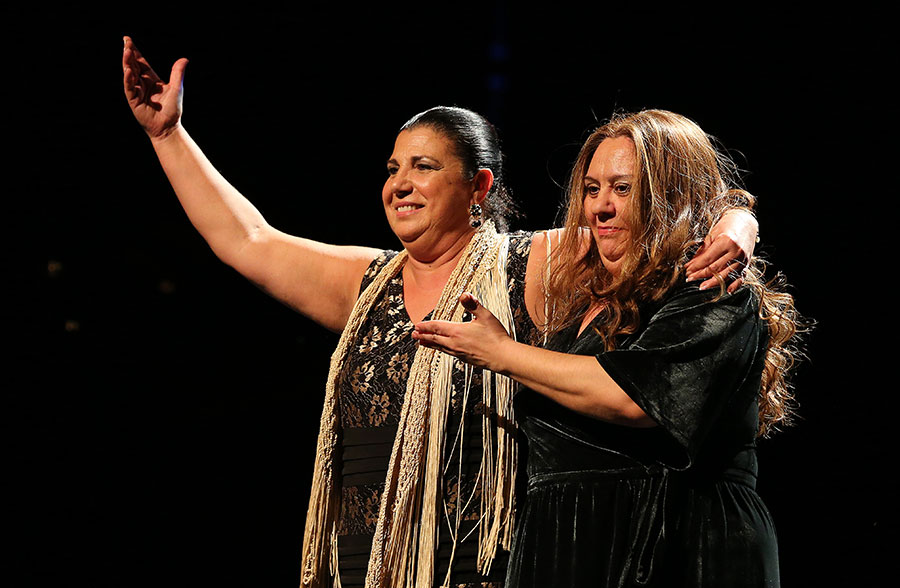 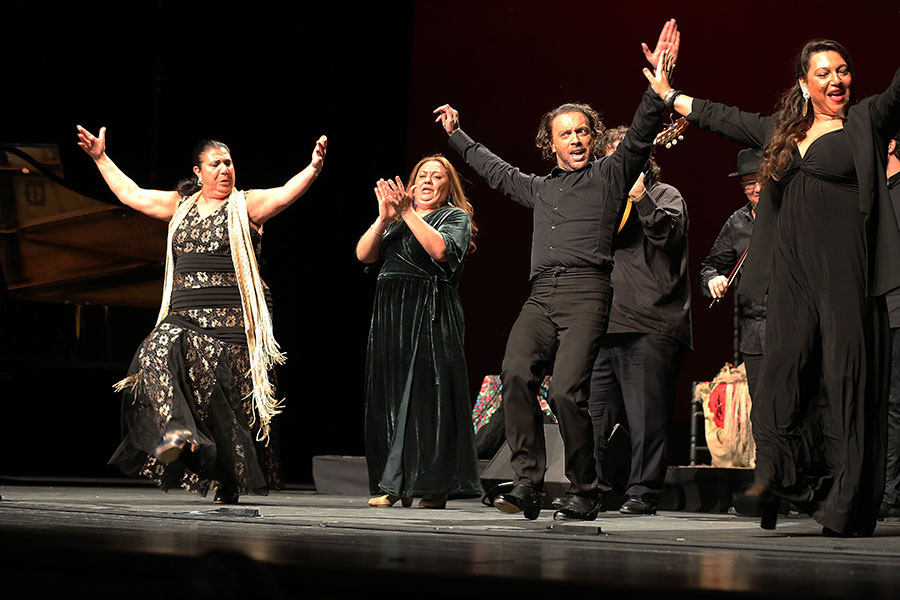 The flamenca Pasionaria, or how to curse Franco to the sound of bulerías

Variety of flavors at the 63rd Potaje Gitano de Utrera