The González Byass winery received a high-quality concert for the presentation of the CD/book that honors the Jerez writer on his 90th birthday.

The concert in honor of José Manuel Caballero Bonald opened and closed with Manuel Moneo, first with siguiriya accompanied by Paco Cepero, and afterwards, tonás.  He was the same as ever, in other words, excellent, and he was playing in his home court.  Like all the rest, because that was what it was all about, Jerez and its artists paying tribute to a man of letters, holder of the Biblioteca Breve prize, the National Prize for Letters and even a Cervantes prize.  The author was not able to be present; at 90 years old, and with a variety of health problems, he doesn’t get around much.  He did participate in the project that yesterday was presented on the stage of the González Byass winery, a CD and book with poems of his adapted by José María Velázquez Gaztelu in which singers such as Jesús Méndez, María José Santiago and tenor Ismael Jordi took part.

The tribute, produced by Mario González, aimed to unite poetry and flamenco.  Nothing new about that, although it served to pay homage to one of the greats, and to prove José Mercé wrong when he declared in the last Bienal de Sevilla that cante was “on short supply” in his hometown.  David Lagos appeared accompanied by his brother Alfredo on guitar, to make the point.  He gave his all with mineras, a form he’s become fond of since winning first prize in La Unión.  Following this, bulerías por soleá, delving into it head-first.  Lagos appears to be at his best moment, but his nonconformism is a guarantee that there are still unexpected things to be found in this wonderful voice which he clearly trains with the greatest of care.  Alfredo on guitar, gets at least three other guitarists in the audience up out of their seats; he too is at the highest point, and although I am an outsider and this may sound daring, Jerez would do well to be looking for a spot to erect a monument to these two.

Following this, Vicente Soto represented the good relations of Caballero Bonald with the Sordera family, one of the most prominent flamenco families of Jerez.  He interpreted siguiriya and alegrías, putting a light-hearted touch to what had been an introspective mood up until this point.  And then, Macanita, dressed in red, matching the Reina Gitana who played a fine, subtle soleá on the piano, like the Jerez singer’s voice.  The wonderful voice of Tomasa Guerrero is the least of it, what it’s about is taste, that thing of being an artist with the slightest gesture, the subtleties of what she says and how, both in the soleá and in the bulerías.  On the record, the latter are sung “al golpe”, but on stage she requested Cepero to play for her to show off (and well-done!) the prizes the Andalusian government awarded him: the Bandera de Andalucía and the Medalla de Oro.

And that was the crucial moment.  That was when Tomasa showed what she was made of.  The microphone gave some trouble, but she carried on without a hitch.  And in the end she simply stood up and sang without amplification, lowering her voice, almost like praying, and then belting it out to the ceiling of the winery full of people who went wild in response to her power.  The show should have ended right there, at the high point, but someone had other ideas, and it all came to an end with the tonás of Moneo.

Caballero Bonald was not physically present, but his verses were.  As were the people of Jerez he described. On stage were gypsies and non-gypsies, rich and poor, as well as that ethnic aristocracy that can only be cultivated in Jerez.  Together, they gave voice to the poet whom many credit with having given little information to flamenco, and a great deal of romanticism, and others who chalk him off as a party-pooper for calling attention to the injustice of his land.  “The cold is bad, and hunger, worse” said the siguiriya sung by Moneo. “As if in an animal’s burrow, the miner spends his life” was dramatically recited by David Lagos.  “How early the sailors get up” sang Vicente Soto to alegrías.

In Jerez de la Frontera, Caballero Bonald has been continually misunderstood.  But he, who never knew cold or hunger, was able to see and not hush up what was going on next-door.  “On the little street where the gypsies live, they survive on air alone”, said Macanita, carrying out the job of overseer of the powers that be that he always demanded of himself as poet. 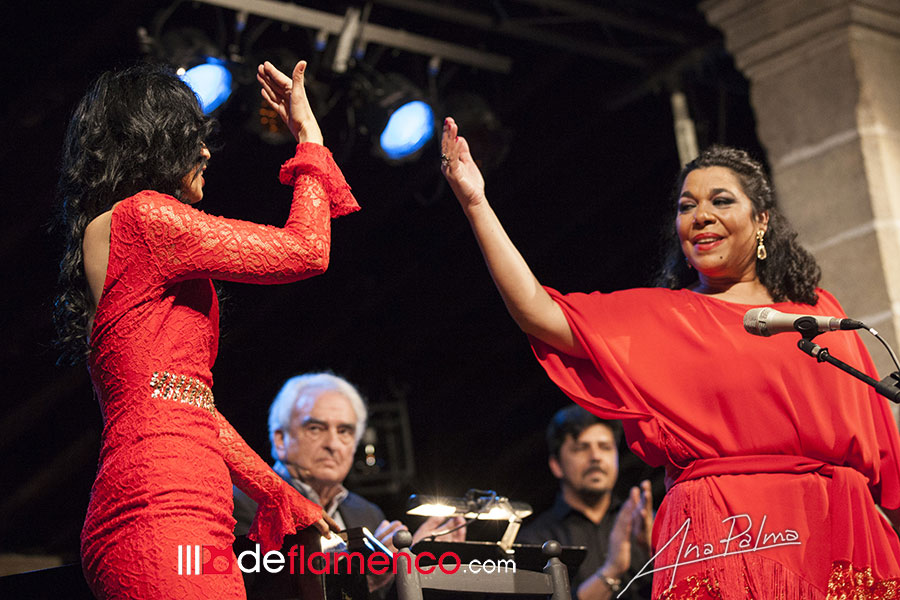