The Barcelona audience celebrated Fla.co.men in an edition of Ciutat Flamenco with incoherent parts.

This year's Ciutat Flamenco festival was the festival of Israel Galván.  And not only because the Seville dancer was one of the three curators, along with Pedro G. Romero and Patricia Caballero who programmed it.  It was because he was the bright star of the event, and because his Fla.comen was actually the only truly beautiful show, from beginning to end.

Niño de Elche, who is in a fine creative moment, had his night with “Máquinas y Flamencas”.  The singer juggled his acrobatic vocal capacity, his interpretive ability, and was accompanied by two talents:  Alejandro Rojas-Marcos on keyboard, and Raúl  Cantizano on guitar.  He hardly sang, which was also the case in the 2015 edition with Juan Carlos Lérida, but with better results.  On this occasion, the noise he made with his throat and his machines was an expression that failed to communicate anything.  Members of the audience were seen to get up and leave, something very rare in an experimental festival where people attend predisposed to try new things.

Nor did the odd couples work.  Not because they were strange, but rather inarticulate.  Inés Bacán was thrown together with Mónica Valenciano, a family-based singer and a famous ballerina, each one doing her own thing, oblivious to one another.  Bacán took ten minutes to interpret two cantes, and the dancer, nearly fifty in which she acted and spoke, but flamenco was nowhere in sight.

The same thing happened with Patricia Caballero and Uchi.  Caballero spoke to the audience rather than dance, while the Triana dancer had only to do a few moves to trigger applause.  The 30-minute show, which cost 12 euros a head, provoked complaints from some members of the audience for being short as well as unintelligible.

The trio composed of Roberto Jaén, El Junco and David Palomar, did a 20-minute sketch in the Carmen venue.  The three of them traded off wisecracks and knowledge, the result was quite entertaining, and was all the more enjoyable because there had been so little flamenco in the festival.  The same thing happened with Paloma Fantova, who danced to the frenetic percussion of Sabú Porrina.  That idea ought to be developed further, because the audience loved it, and the dancer showed she has a very interesting path to follow.

Galván presented his Fla.co.men in two sessions, and could have done more, because right up until the last moment there were people trying to acquire tickets.  Galván was a smart boy: he danced to the utmost, flamenco, jota, pasodoble and Sephardic music, and used his body however he wanted.  He wanted to show that everything in him, in his flesh and soul, is music, and he achieved that goal.  He did it with that carefree way of his, half child, half animal.  Divine.  He showed you can parody, break molds and even curse when you know what you're doing.  That's what he did with flamenco.  And he did it to die for.

Unlike in many other shows, with basic illumination, wardrobe and other details, Galván skimped on nothing.  Instruments, props, lighting, musicians, singers…  He put the best of everything on stage.  Antonio Moreno with his brilliant percussion; Tomás de Perrate and David Lagos, what a singer David Lagos is; Eloisa Cantón on violin; Juan Jiménez Alba on sax and Emilio Caracafé playing guitar.

The first day, El Güito did an epilogue to Fla.co.men with the soleá that bears his name, and Saturday it was dancer Cesc Gelabert gave his interpretation of the same piece.  Beautiful, elegant and consistent was the Catalonian's version.  Tremendous.  Because he was careful not to break it, but rather read it.  And what a beautiful reading it was.

Galván turned off the lights, did heelwork throughout the whole place, spoke to the audience, remained alone.  He leaned on his back-up but danced alone.  Because Israel can only dance alone.  And in his case, it's no problem because he maintains a dialogue with himself, but the whole world concerns him; that is a work of art.

At the presentation of the festival, the collective character the curators had wanted to give the whole program was emphasized.  It was lovely at the end when Minako Seki invited the audience to his ceremony where he danced at the hall of the Mercat de les Flors, and very handy the audience's discomfort questioning works such as that of Caballero.

Many of these things hinted of Galván and his way of seeing flamenco.  But the difference between those shows and his own, is tremendous: because Galván breaks new ground while proposing new things, he knows exactly how he is going to deconstruct his art, and while he's at it, he's weaving another guise.

Galván needs the audience, and doesn't put them aside.  If that's being collective, Galván is collective.  But he doesn't leave the job of creation to the spectator.  That's his thing.  And he does it superbly. 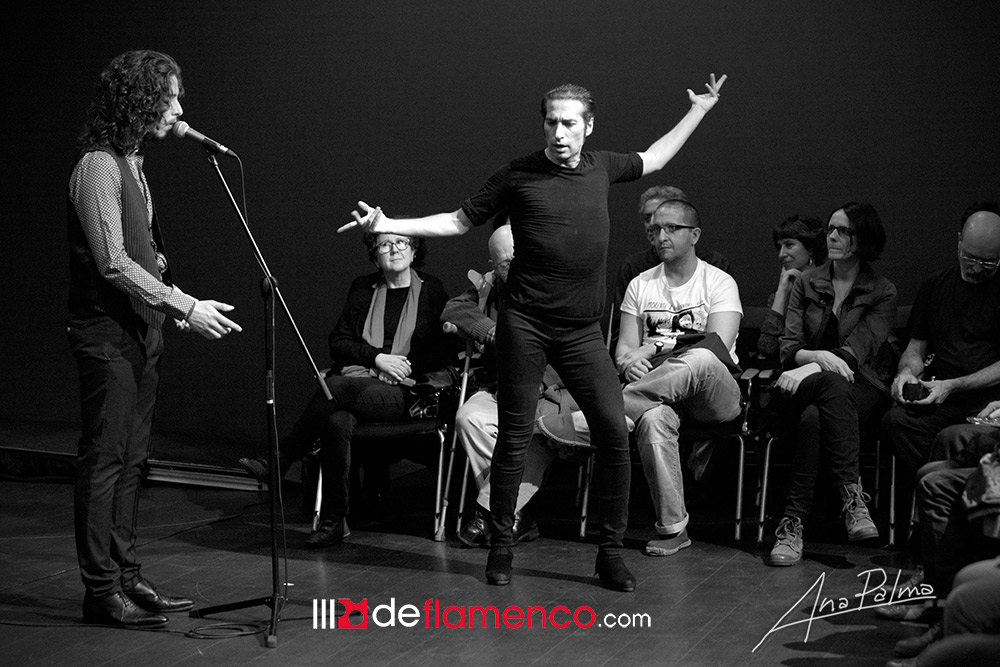