Presentation of “Carta Blanca” of dancer Andrés Marín (Seville, 1969) who…guess what…had gone decades without performing in Madrid, and had never debuted a work of his own in the nation’s capital, because he’s been busy building his career in France and the rest of the world.  Which makes you suspect that Madrid might be the capital of flamenco, but the capital of dance is outside of Spain.

“Comparing” is a gerund

It’s possible that when you talk about Andrés Marín, the name of Israel Galván comes up.  Okay, it’s like if you’re talking about Juan Gris, and mention Pablo Picasso; both are painters, and they were cubists. Period.  Marín and Galván, I don’t think have ever painted the same picture (just as Picasso and Gris, but that’s another story).

At first glance, they don’t seem at all similar.  Andrés comes on stage, and you know he’s going to end up singing, his whole being is asking for it, and he’s got Segundo Falcón and José Valencia singing for him. Marín’s own people play rock, they can play dissonant music (and in fact, they do), but they’re not obsessed with overturning the game-board, and that pushes the dancer to center-stage, while Galván measures every inch and angle; Marín is searching for his place on the planet and on stage.  It might look like they’re dancing the same thing, but no way.  It’s a mirage.  If Marín ever performs at a rock concert, he’ll end up winning over the crowd.  To do away with these comparisons, and leaving some margin for differences, Andrés Marín is closer to Mick Jagger than Galván.

Andrés has let his beard grow long, and not because of any hipster influence, but because he’s preparing a version of Don Quijote, which perfectly suits his long thin form, with lanky arms like lances, “Carta Blanca” is a compendium of various shows, and perhaps for this reason we have the feeling of Andrés Marín’s struggle to put the pieces together and bring out a new work.

All the elements are on view, no one leaves the stage.  And the star of the show subjects himself to extremely demanding activity.  He wears cowbells on his back, the kind used in traditional celebrations in Segovia, Navarra and Basque Country to ward off the bad spirits that were part of “Somos Sonos” (2010), a show based on bells with Llorenç Barber, ending with a bell-ringer’s gag.  I didn’t detect pieces from “Tuétano” (2012) inspired by Antonín Artaud, I suspect the author’s funereal atmospheres of “Teatro y su Doble”, are over-the-top, even for flamencos.  One of the most disturbing, poetic (and magnificent) characters who appears in “Carta Blanca”, is a drawn harlequin with a mask, a paper hat and bare shoulders, this is the most strictly flamenco music.

The musicians driven by the electric guitar and hurdy-gurdy of Raúl Cantizano exhibit an eloquent rapport with the dancer, and scare off the “the flight of the bumblebee” in another classy gag.  It appears they can play jazz, rock and flamenco, and they leave the trail of a rich and complex sound-track.  José Valencia and Segundo Falcón are excellent in the vocals.  In the final stretch, Andrés Marín can no longer contain himself, and sings glued to the floor.  “It’s that I’m a frustrated singer” he explains after the show.

And we are completely astonished to learn that a 48-year-old flamenco dancer had never before debuted a work in Madrid. 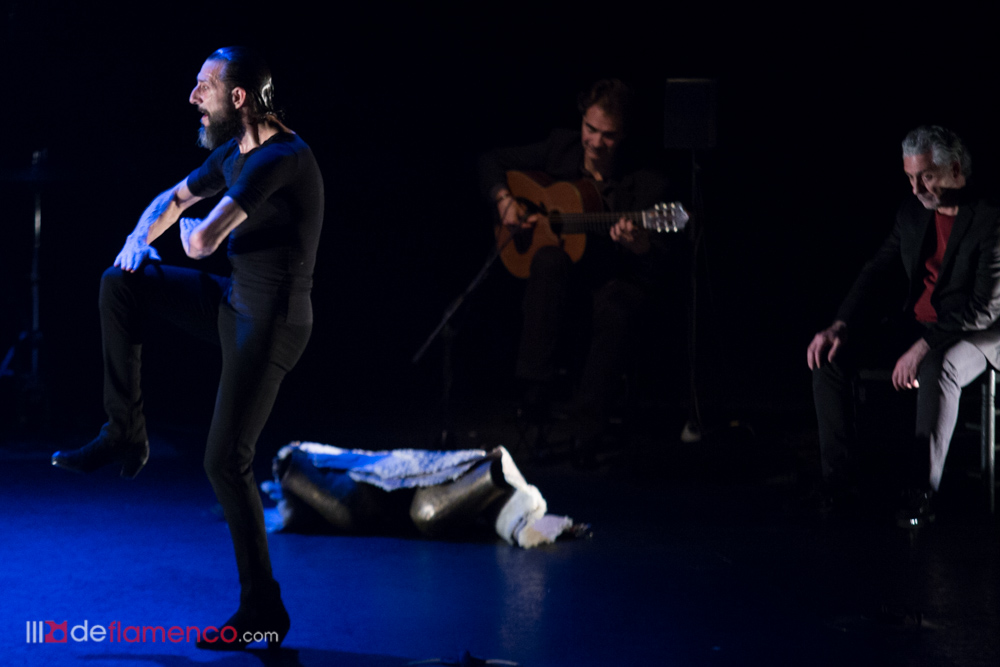 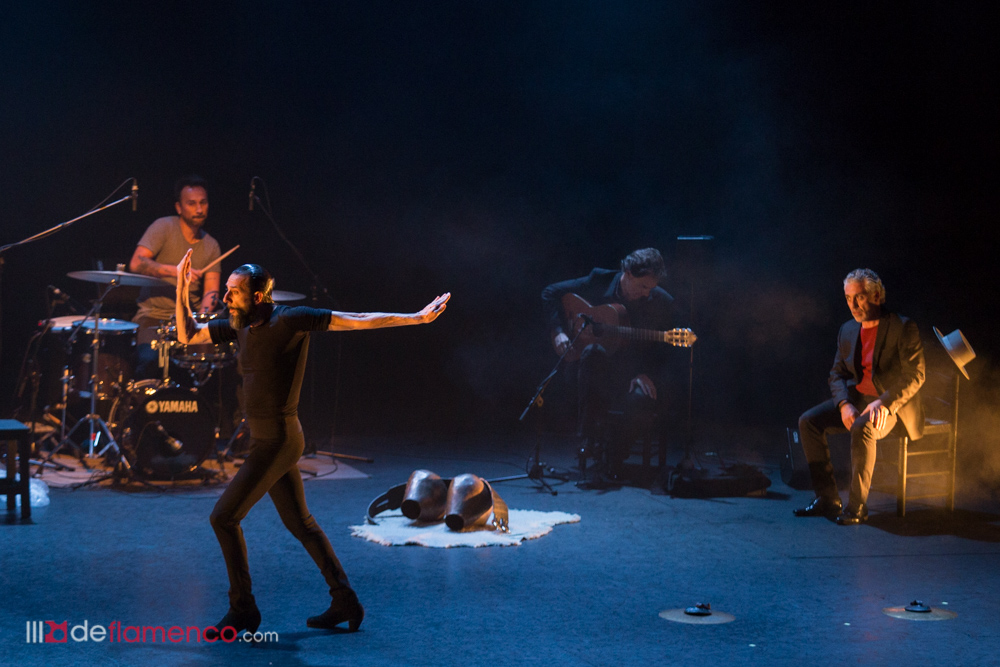 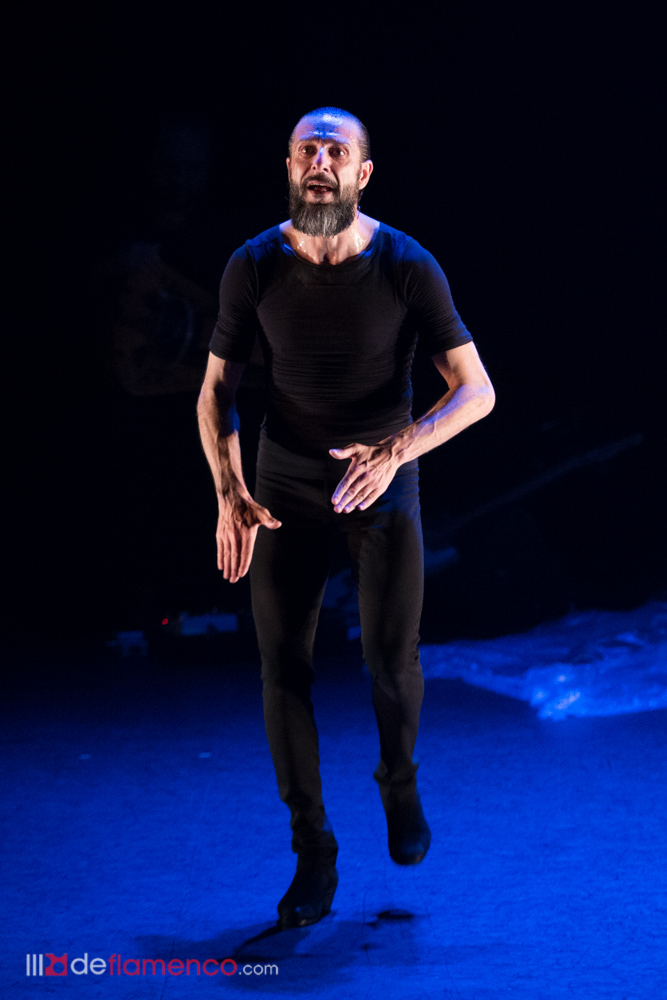 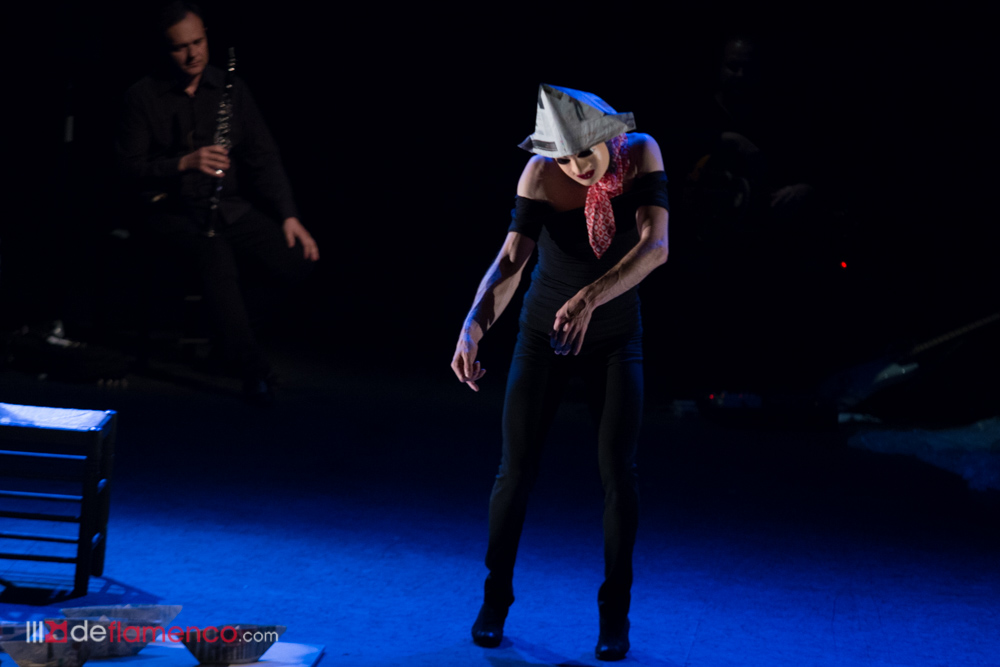 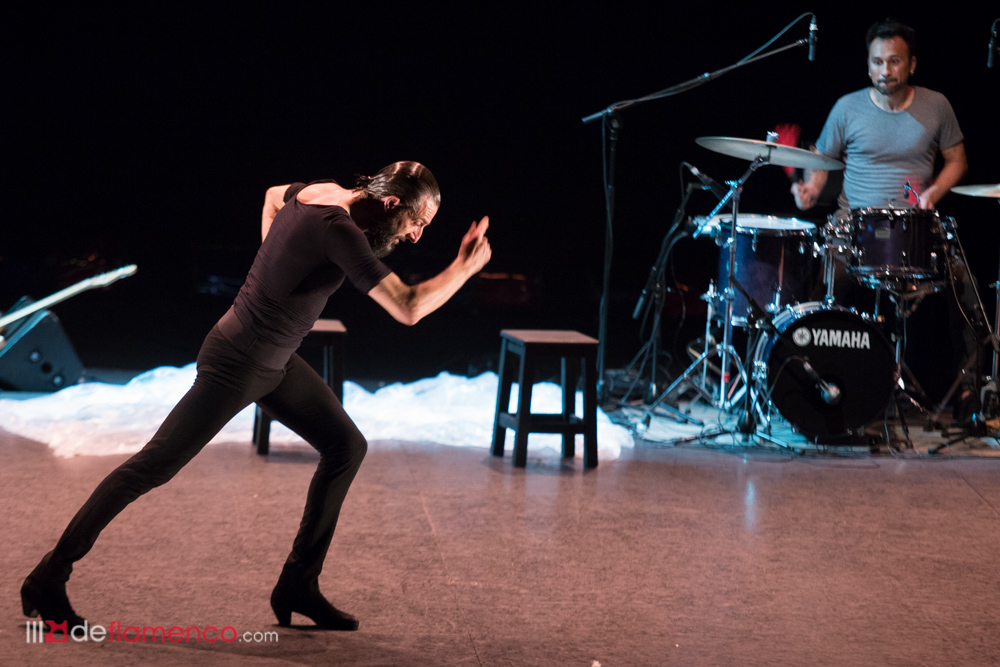