The typical cuisine of salmorejo and flamenquines, Cordoban sherry, the Mezquita, guitar…and not necessarily in that order.  These are the most representative claims to fame of the lovely city of Córdoba where the historic first edition of the Congreso de Guitarra Flamenca has just been officially closed, with the goal of continuing annually, something the success of this year's edition seems to guarantee. 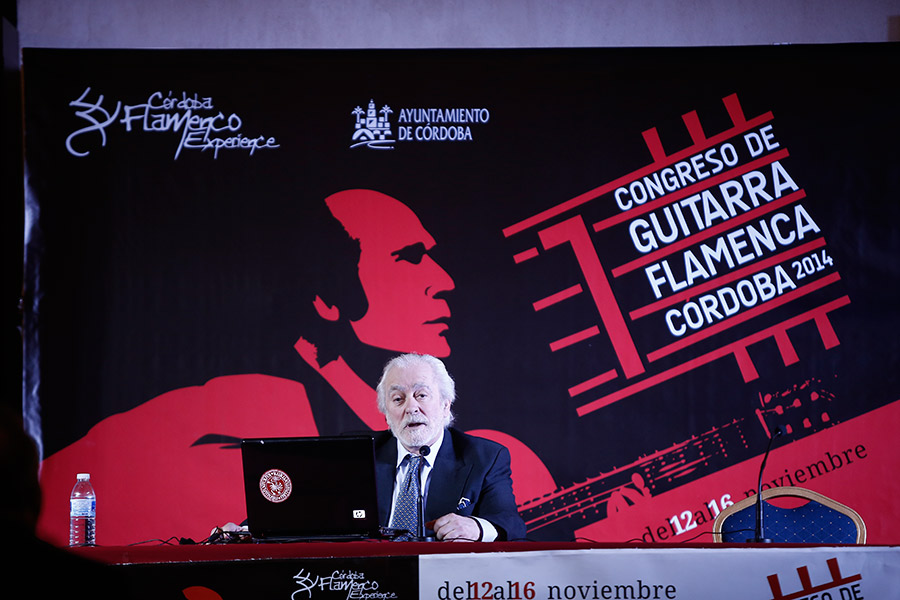 A generous program with free registration…five days of communications by emerging scholars, speeches by outstanding investigators, encounters with great interpreters, a photographic show, roundtable discussions and recitals, with the permanent backdrop of paying tribute to Paco de Lucía…kept us happily occupied each day from morning to night.  The first flamenco guitar event of this nature and dimension in a city where the guitar is even present in the clock of the historic Tendillas plaza which for more than a half-century has marked the hours and quarter-hours with the sound of Juan Serrano por soleá.

Seldom has there been so much guitar talent per square meter in such a short time, and not even the copious rain of the first days could dampen people's enthusiasm.  In the official opening, the mayor of Córdoba, José Antonio Nieto, declared “this is the great convention of flamenco guitar that was waiting to happen”.  Some two-hundred people of all ages and nationalities filled the beautiful Sala Orive for the inaugural speech of maestro Manolo Sanlúcar who declared that flamenco “is a timeless culture that is above passing fashions”.  The speech was followed by a brief but superb guitar recital by Manolo Franco who played, among other things, a beautifully lush and original garrotín.

Thursday, Friday and Saturday mornings there was time for a number of communications by emerging scholars who dealt with a wide variety of topics illustrated with audiovisual material and live music.

The first encounter of the first complete day, was with Paco Peña, one of the people most responsible for the flamenco guitar having taken root so firmly in this city.  “A life devoted to the guitar”, and never was a title so apt.  The much-admired veteran, founder of the flamenco guitar department of the Conservatory of Rotterdam, the Paco Peña Guitar Center of Córdoba and the consolidated Festival de la Guitarra de Córdoba, spoke humbly and convincingly of his life, and the importance of hands-on experience as a complement to conservatory studies. 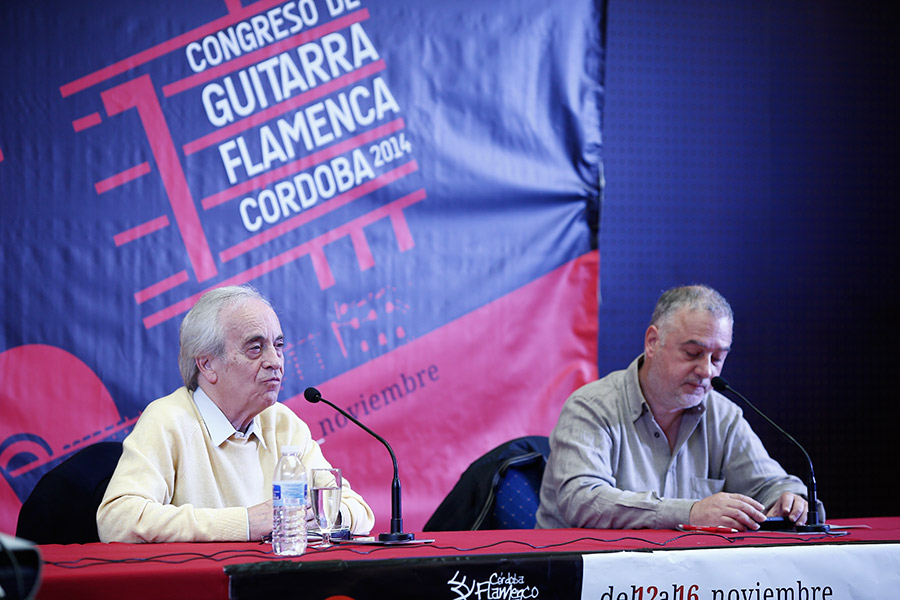 Another maestro of the six strings, Jerez guitarist Gerardo Núñez, began his talk with a moving tribute to Paco de Lucía.  He spoke of his own career, and criticized the official practice of sponsoring flamenco festivals in wealthy countries outside Spain.  A roundtable discussion with Cordoban guitarists José Antonio Rodríguez, Paco Peña, Merengue de Córdoba and Paco Serrano dealt with the topic “The Córdoba school of guitar”.

In the afternoon, José Antonio Rodríguez spoke of “The generation of guitarists born in the sixties”, the first that was marked by the presence of Paco de Lucía.  He explained that learning was a process of seeing, hearing and doing, with no methods.  The story of the many hours Paco practiced in his youth, caused young guitarists to practice ten or more hours a day, leading to serious injuries.  Rodríguez also pointed out the numerous changes of recording format he had to assimilate, from records to reel-to-reel, to cassette to CD, etc…

Juan José Téllez, Paco's biographer, gave a fascinating summary of the guitarist's life with the support of unpublished photos from Curro, Paco's son.  Among other data, Téllez pointed out that during the Spanish Civil War, Paco's father was sentenced to face the firing squad, but his life was spared at the last moment thanks only to the emotional pleas of his wife Lucía;  Paco might never have been born.

At night, at the Góngora Theater, three young guitarists, José Tomás, Niño Seve and Diego del Morao, with shouts from the audience for the latter of “long live your father!”, presented “Tres Guitarras a Paco”, with the support of vocals, palmas and percussion.

The first encounter of Friday was with the maestro Fosforito, holder of the Llave de Oro del Cante, who delighted the audience with memories and anecdotes from his eight years of close artistic collaboration with Paco de Lucía, a relationship that would yield a splendid anthology of 48 cantes.  Óscar Herrero, master guitarist and teacher, commented on the importance of combining methodology with traditional forms of learning, and gave a sample of his way of teaching, explaining several guitar techniques. 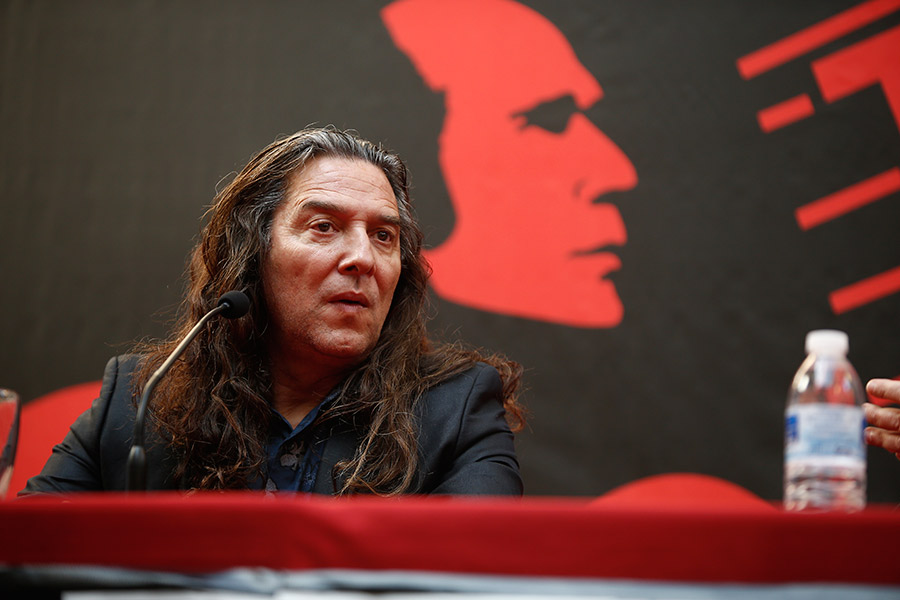 In the afternoon, another much-admired scholar, José María Velázquez Gaztelu, the person responsible for the series Rito y Geografía del Cante, and Rito y Geografía del Toque, spoke at length of the presence of the guitar in these television programs, more than 40 guitarists in all.  He projected fragments of the series with Melchor de Marchena accompanying Manolo Caracol, and Diego del Gastor with Fernanda de Utrera.

Also on Friday afternoon, José Manuel Gamboa spoke about his book that deals with Sabicas, “Nuestro tío de América”, and gave a rundown of the discography of the guitarist from Pamplona.  This left us just enough time for a quick beer on the way to the theater for Tomatito's recital with his “Family Band”, featuring his daughter singing, and his son on second guitar, in addition to the explosive dancing of Paloma Fantova and percussion and chorus to round out the sextet.  The inevitable words for Paco, and a melancholic piece in his honor, moved the entire audience, and a strong rain that fell as we left the theater seemed to accompany the general feeling.

The sun came out for the last full day of the first Congreso de Guitarra Flamenca.  In the morning, Tomatito came to speak about his life, the move to Málaga from Almería and his job at the Taberna Gitana where he met Camarón.  He described Paco as “one of the best musicians ever to have come out of Spain, and we should be proud of him”.  He spoke as well of Niño Miguel, and expressed ideas about the teaching of flamenco.  Afterwards, the cerebral Juan Manuel Cañizares explained his “Flamenco vision in the transcription of Spanish music for guitar”, and how he “sought out the flamenco feeling that can be found in these works”.  He offered a fascinating demonstration of how he was able to adapt pieces from Spanish orchestral music for the flamenco guitar.

After a roundtable discussion with teachers from the conservatory to discuss the various problems and advantages related to learning flamenco guitar in a conservatory (the students can play the soleá of Sabicas, but can they play por soleá?), guitar expert Norberto Torres talked about “Ramón Montoya and the classical flamenco guitar”, a detailed study of the evolution and eventual branching off of these two genres, now so well-defined.  According to his investigation, “the elimination of the rasgueado represented the beginning of classical guitar in the middle of the 18th century”.

The last scholarly presentation was “Paris – Zambra: from reasoning to intuition”, by veteran musicologist Philippe Donnier.  With an original presentation, he explained various aspects of his theory of flamenco rhythms which he demonstrated guitar in hand.

Saturday night, the streets of Córdoba filled with the sound of “Entre dos Aguas”, and the novel projection, or “mapping” of images in movement onto the Roman Temple in a show called “Paco de Lucía en el Corazón”, attracted hundreds of passers-by. 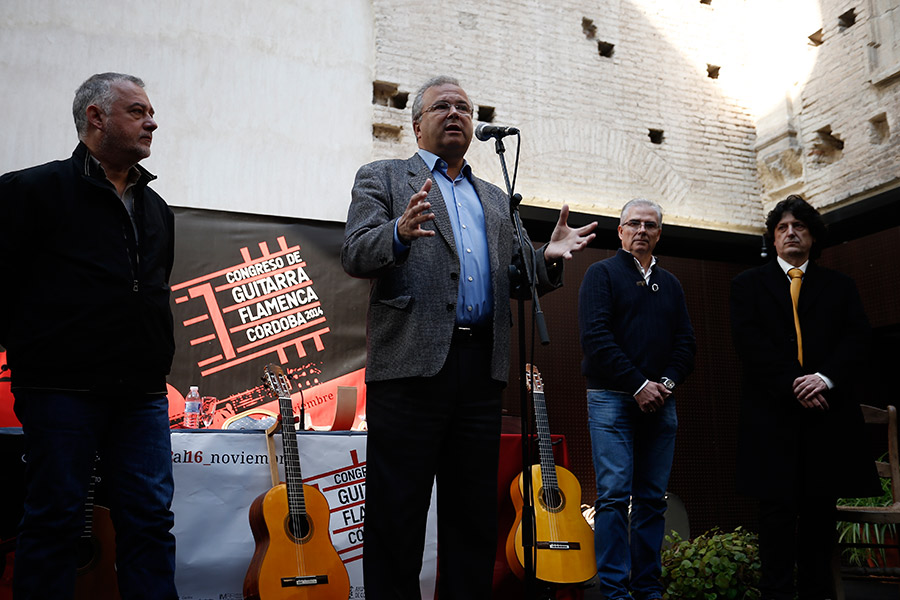 On Sunday, all that remained was the guitar construction workshop given by José Rodríguez and, coinciding with International Flamenco Day, the official closing of this ambitious project made possible by the Culture Department of the Córdoba municipal government, and the Municipal Institute of Stage Arts IMAE-Gran Teatro, and of course, the organizational work and expertise of musicologist Faustino Núñez who directed the activities and conducted the encounters with the artists. 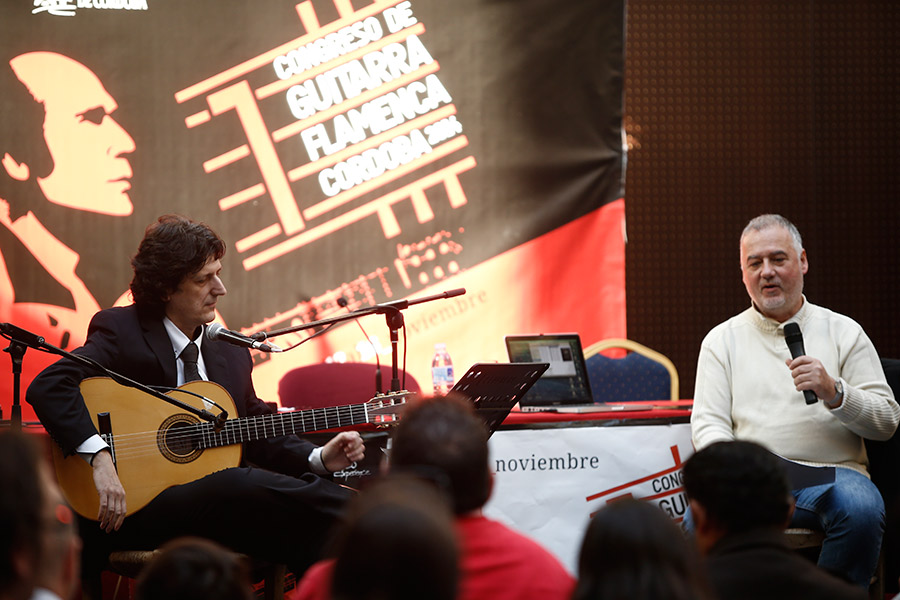 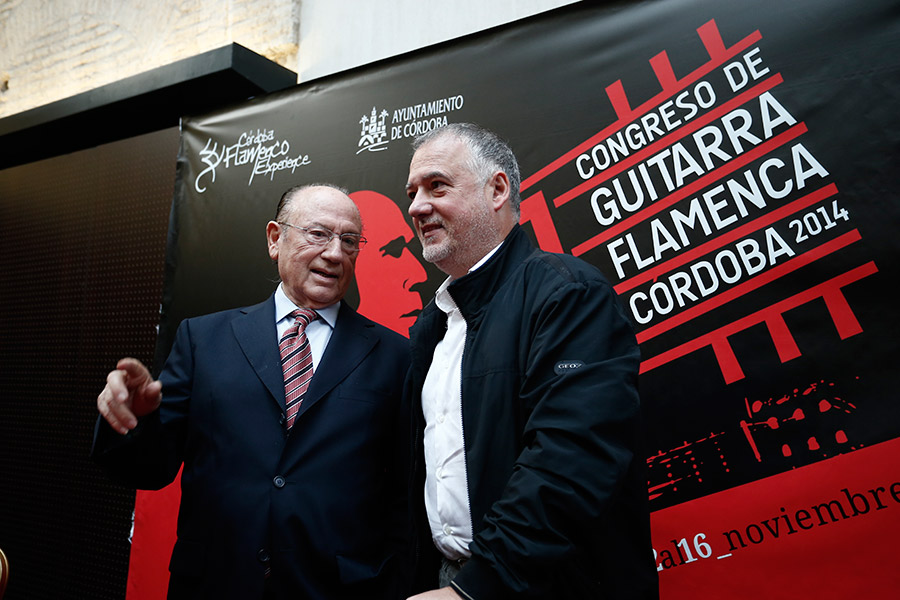 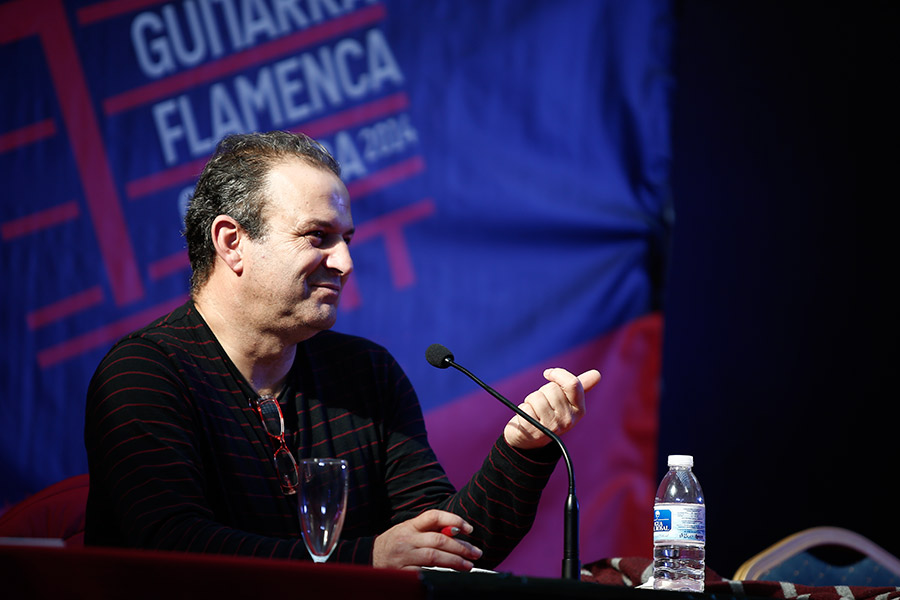 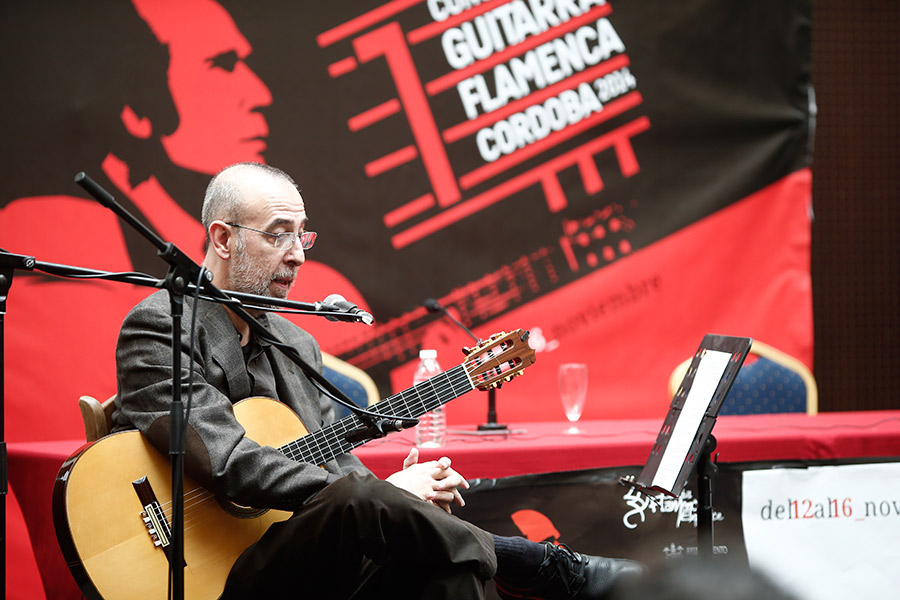 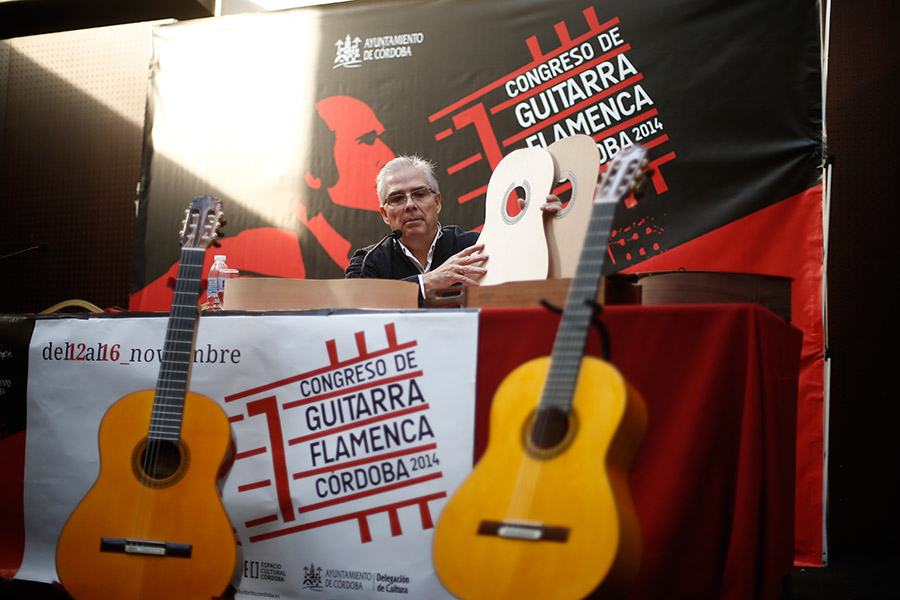