Berlin returns to the international flamenco circuit with a multidisciplinary festival.  The goal is to again give this city a flamenco festival with the high standards required in the cultural capitals of the world.

The Berlin Flamenco Festival is opting for contemporary flamenco, and it will be offered at several venues.  The Academia de las Artes (Adk) features the Company of Belén Maya and pianist Dorantes with dancer Leonor Leal.  Belén Maya this year reaches thirty years as professional artist, being a leader of avant-garde flamenco dance from the first moment.  Belén Maya was recently recognized with the Critics' Prize of the Festival de Jerez, the most important event of its kind in the world.

Dorantes continues to open new expressive paths for the flamenco piano.
At the headquarters of the Instituto Cervantes, Rosario la Tremendita, singer, composer and one of the major innovators of current flamenco singing will perform.  She is presenting her recording Fatum, nominated for the Latin Grammy for Best Flamenco Music in 2013.  The program of performances will be rounded out with guitarist Antón Jiménez and the show Berlin in Flamenco, a production of flamencoArt Berlin, under the direction of Michael Schuldt.  This show, which showcases the most noteworthy local flamenco artists, relives the history and development of flamenco in Berlín.

In addition to the main program, there will be a series of complementary activities such as films, workshops, roundtables and two exhibits with live painting performance with the artist Patricio Hidalgo.

Followed by an encounter with the artists, and complimentary wine.

Followed by exhibit and performance by Patricio Hidalgo

Company of BELÉN MAYA: Invitados
Followed by an encounter with the artists.

DORANTES, piano with LEONOR LEAL, dance
Followed by an encounter with the artists. 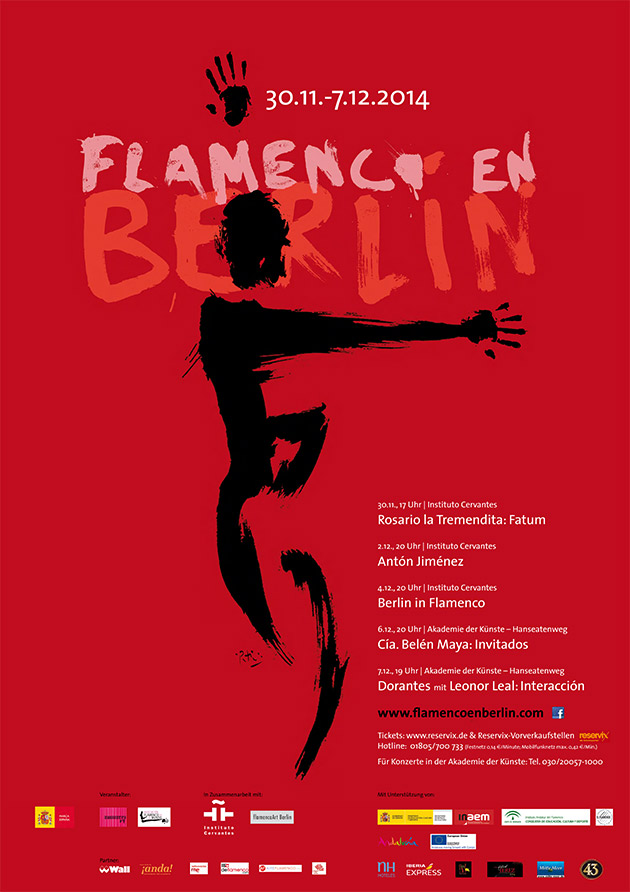