Pierre and his wife Yane made their first contact with flamenco in 1955 when the French record company Ducretet Thomson had just brought out the three recordings that comprise the Anthologie du Cante Flamenco, directed by guitarist Perico el del Lunar, and which was later released in Spain on the Hispavox label.  The Lefrancs soon struck up a friendship with singer Rafael Romero (the singer from Andújar who dedicated an alboreá to them on a record made in France in 1959, and whose record jacket included a text by Pierre Lefranc), Juan Varea and the Jerez guitarist Perico.

Pierre was a professor of English Language and Literature, and taught at universities in Canada, France and Morocco.  In the middle of the 1950s, he frequented a Parisian hangout, El Catalán, where a nascent flamenco community, already accustomed to “different” sounds such as those of the manouche jazz of Django Reinhardt, the great gypsy guitarist, could be found.  The Lefrancs visited Madrid on several occasions where they would often see Perico el del Lunar, and the afore-mentioned singers, as well as others who worked at the Zambra tablao.  Little by little, Pierre acquired a solid knowledge of flamenco singing.

On one of their trips to Morocco, they passed through La Línea de la Concepción where they ran into Anzonini, the great festive singer and dancer from Puerto de Santa María, and native of La Línea, Agapito Heredia Heredia who opened his home to them.  The interest in finding flamenco in its places of origin was quickly picked up by the artist from El Puerto who escorted Lefranc to gypsy homes throughout lower Andalucía where flamenco singing was maintained as part of day-to-day life.  In this way, they had access to singing forms and repertoires that were otherwise difficult to come by for the average person, and more so for foreigners.  Between 1961 and 1964 they visited La Línea, Chiclana, Cádiz, Jerez, Rota, Utrera, Alcalá de Guadaira and Dos Hermanas, where recordings were made in the intimacy of the home, nearly always without guitar, with voices at that time still unrecorded such as those of Tío Borrico, Paulera de Jerez, Agujetas el Viejo and his son Juan el Gordo, Manolito de María, Perrate de Utrera, Santiago Donday, el Negro del Puerto, Orillo del Puerto, and the very young Rancapino and Pansequito.  Others, such as Juan Talega, Chato de la Isla and la Perla de Cádiz had already done some recording in that era.  But there were also other singers whose work we know only due to the Lefranc's having tape-recorded them.  People like Rafaela de Tarugo, Rancapino's mother-in-law, and Marta Valencia, María la Sabina, mother of Santiago Donday, Paulera Viejo, Antonio Jarrito and Juan Barcelona.  Some of these voices appear in the early seventies in the TV series Rito y Geografía del Cante.  At the same time the Lefrancs were traveling around Andalusia, Caballero Bonald began a similar project for the Vergara record company, which in 1968 published the important Archivo del Cante Flamenco.  Many of the recordings made by the Lefrancs were brought to light by Luis Soler and myself in the Testimonios Flamencos (CDs which accompanied the Tartessos Historia del Flamenco), with the couple's and artists' permission, either implicit, or from the families.

These “gypsy years”, as the Lefrancs called them, marked the couple forever.  They were the vital basis for later investigations that Pierre carried out with utmost diligence, most notably his book, “El Cante Jondo, del Territorio a los Repertorios: tonás, siguiriyas, soleares”, with a prologue by Caballero Bonald, published in Spain in 2000 by the University of Sevilla, and sponsored by the Yehudi Menuhin International Foundation (two years earlier, published in French).  It was the writing of this book that began the friendship I've maintained with Pierre and Yane over nearly 25 years.  In 1992 Luis Soler and I published “Antonio Mairena en el Mundo de la Siguiriya y la Soleá”, which came to Pierre's attention.  He soon contacted us, as ever since his retirement in 1987, he had planned on describing the various styles of soleá, siguiriyas and tonás, part of which our book dealt with.  Many letters were exchanged, mostly speaking of the genesis of flamenco singing, and the various styles of siguiriyas and soleá, in addition to socio-cultural aspects. In this respect he writes in his book, referring to that of Luis and mine: “Beyond any doubt, their work allowed me to save one year because there were many solutions, while at the same time it brought a supplementary batch of problems, also enough for another year”.  Pierre used to send me his flamenco writings, which can be found in the magazine Candil and in webpages such as Triste y Azul, Jondoweb, Ático Izquierda and others, for me to proofread them.  He wrote in splendid Spanish, plenty of natives wish they could write as well, although the occasional italianism slipped in.  That was because the Lefrancs often took their summer vacation in Sicily where they had a yacht which they unfortunately sold shortly after I met them; Pierre said he would have liked to invite me.  On one trip I took through Italy with my wife, we spent a couple of days with them in Nice, and he suggested fabulous places throughout the island.  His way of describing Palermo was “a fascinating putrefaction”, which couldn't have been more accurate.

I twice visited his home in Nice, the first time in 1999, and the second in 2004, and they visited me in 2001, as well as the following year, which reinforced a friendship which until them had been limited to written messages.  The 2001 visit was due to the fact that Pierre attended the Congreso Flamenco of Algeciras where he presented his book.  I also coincided with him at Harvard University in 2004 during an academic series on Andalusia organized by my wife, Elvira Roca.  She oversaw the Spanish translation of Pierre's book, translated by Nelly Clémessy, a good friend of Lefranc's.  On that occasion, Pierre maintained fruitful conversations with professor Márquez Villanueva, the renowned Hispanist.

Yane, Pierre's wife, was fundamental in his life.  She was born in the city of Golete when Tunisia was still a French protectorate.  Like Claudia Cardinale, also born there, she was very beautiful, working as a model in her youth.  She accompanied Pierre in his journey to the center of flamenco in a way that was remarkable.  In recent weeks, and knowing the delicate condition of Pierre, I spoke with her several times, and it was she herself who gave me the bad news just two hours after Pierre's passing.  She asked me to choose cante for Pierre's funeral, as this had been his desire.  I chose some powerful siguiriyas sung by Santiago Donday in 1961, martinetes recorded by Juan Talega at his home in Dos Hermanas and the above-mentioned alboreá of Rafael Romero.

Pierre was a likeable person, intelligent, and a great conversationalist.  At times he seemed stubborn in his beliefs, but would always lighten the mood with his fine sense of humor punctuated by laughter.  I'll always remember his almost childish perplexity upon finding a new idea or information with his “ah, yes!”, which always meant he was extremely interested.  Above all, he was a man with boundless curiosity, who had the tremendous good fortune to find a life-partner in whom beauty was never an obstacle to her intelligence.  With great fascination we used to listen to her talk about her investigations of sir Francis Drake and the famous pirate's coffer that had been forever lost after he was imprisoned in the Tower of London.  After extensive investigation, Lefranc came to the conclusion that Drake had hidden the chest in a castle in Scotland, but authorization was not give to tear down the walls of the castle in order to arrive at the mysterious treasure.

Flamenco has lost a fine investigator of great cultural humanism who lived flamenco from the inside at a time when cante was a natural part of life in many towns throughout Andalusia.  Those of us who knew him, profoundly regret the passing of this friend. 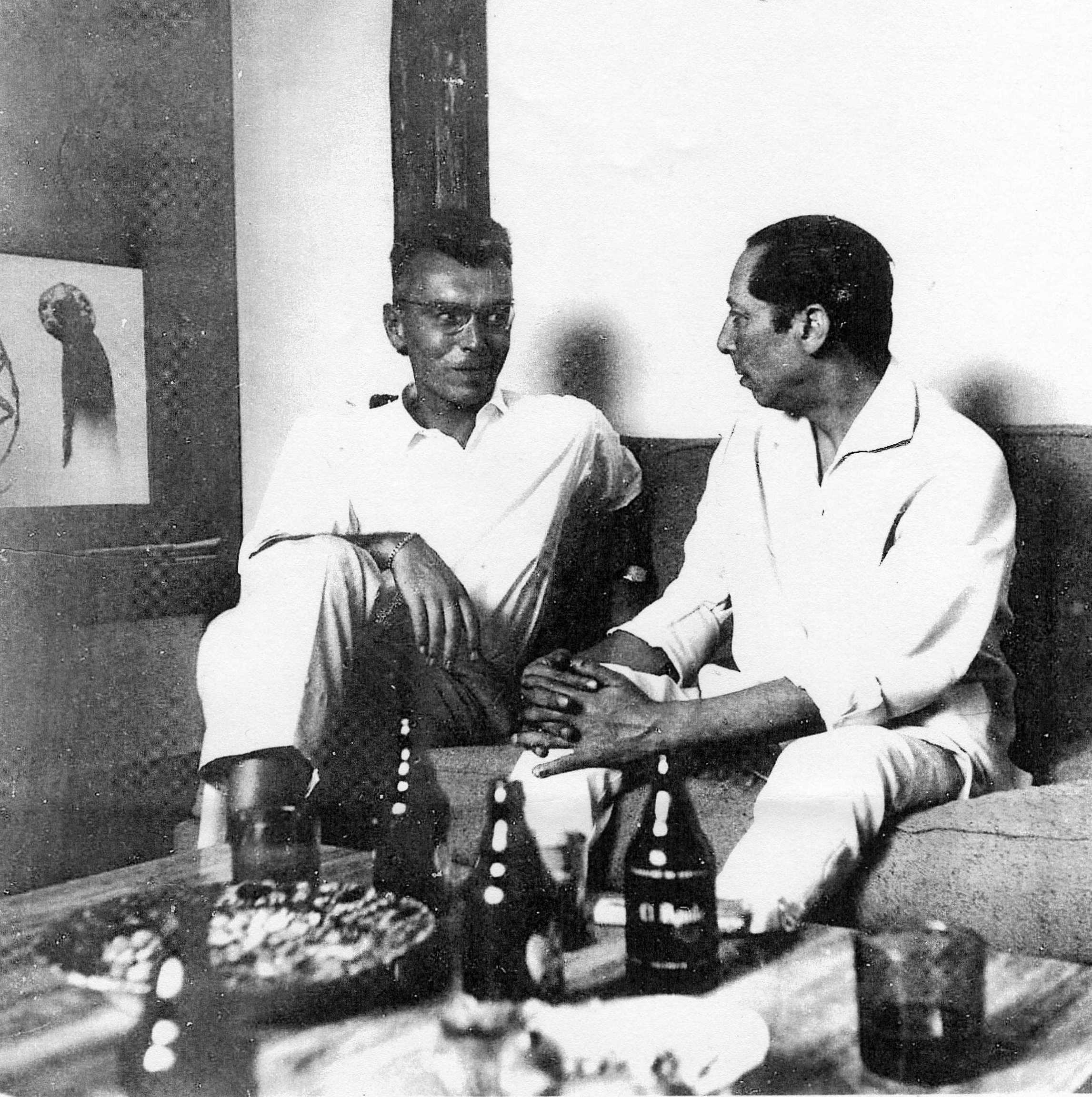 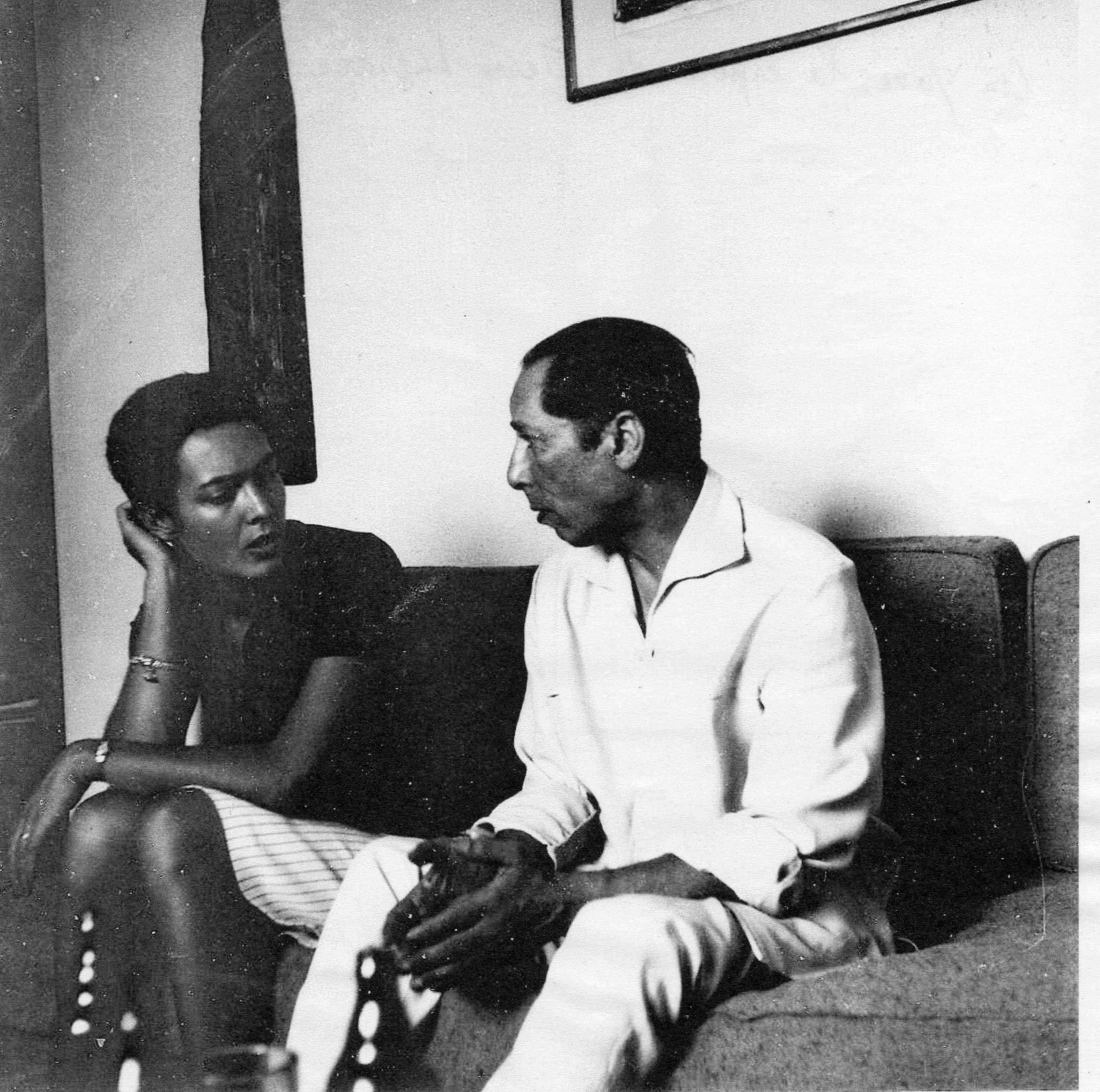 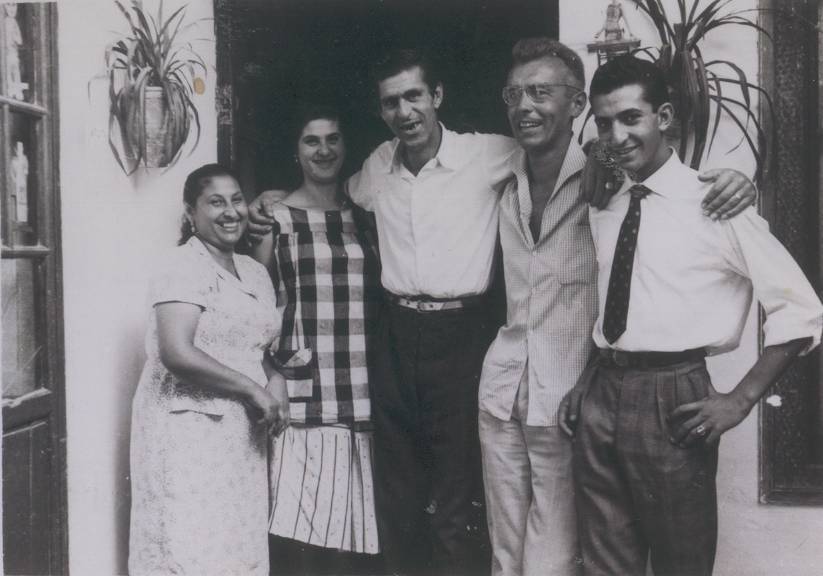 3. In the middle, Anzonini del Puerto with his daughter María Luisa, and wife María Reyes Suárez, at his home in Puerto de Santa María. Alongside Pierre Lefranc is Agapito Heredia. (Archivo Lefranc, 1961) 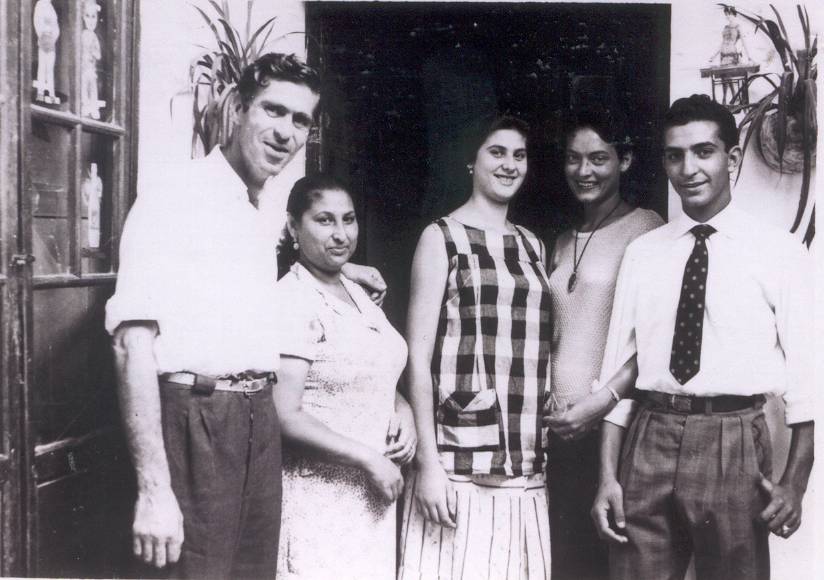 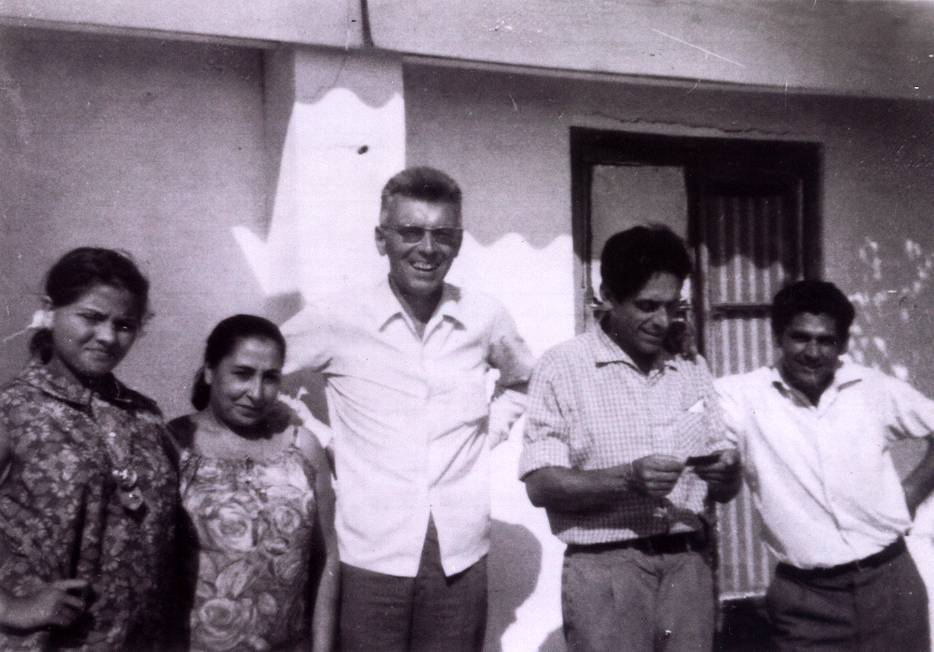 5. Pierre Lefranc betweeb Perla de Cádiz and her husband Curro la Gamba at the inn they had in Cádiz. (Archivo Lefranc, 1961) 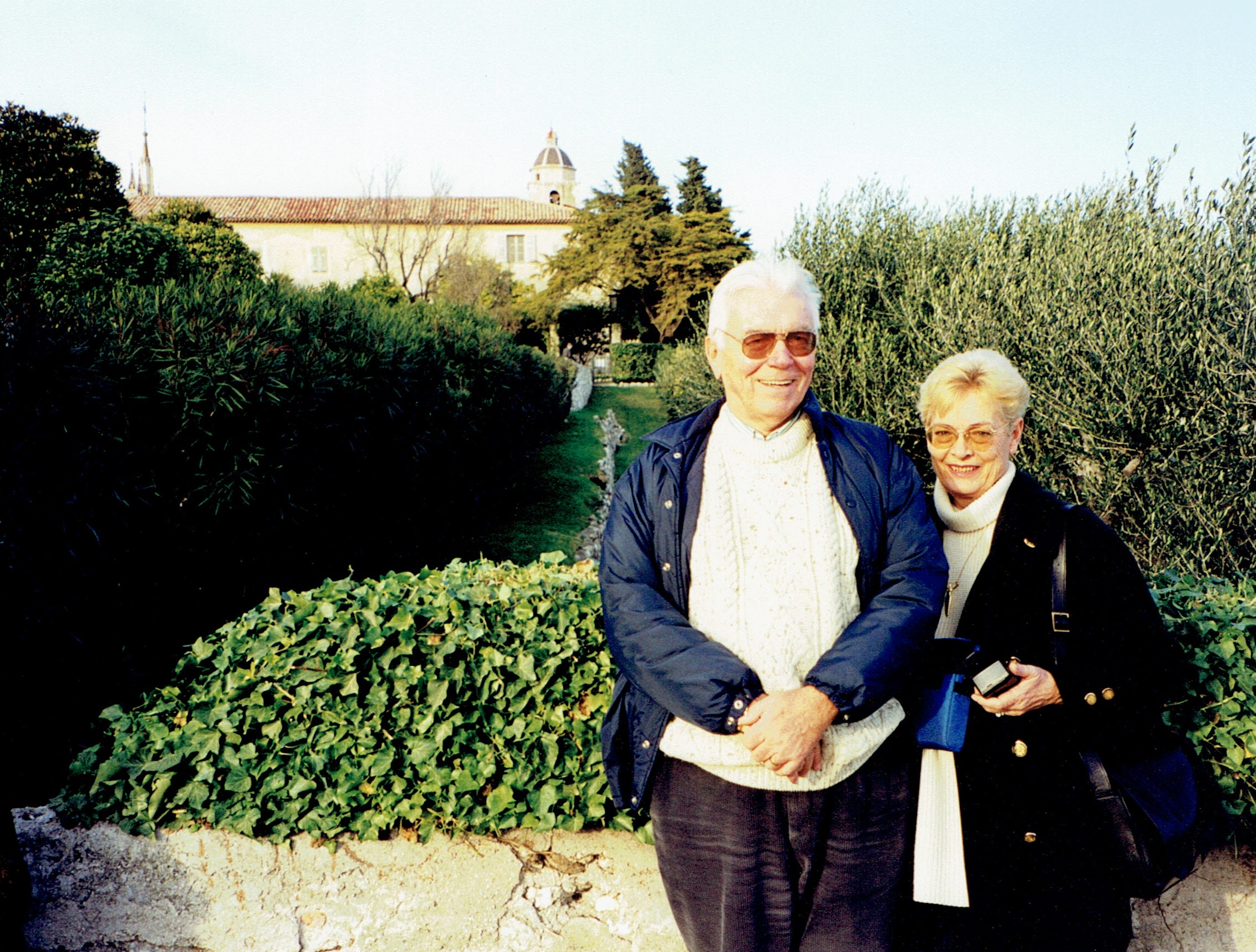 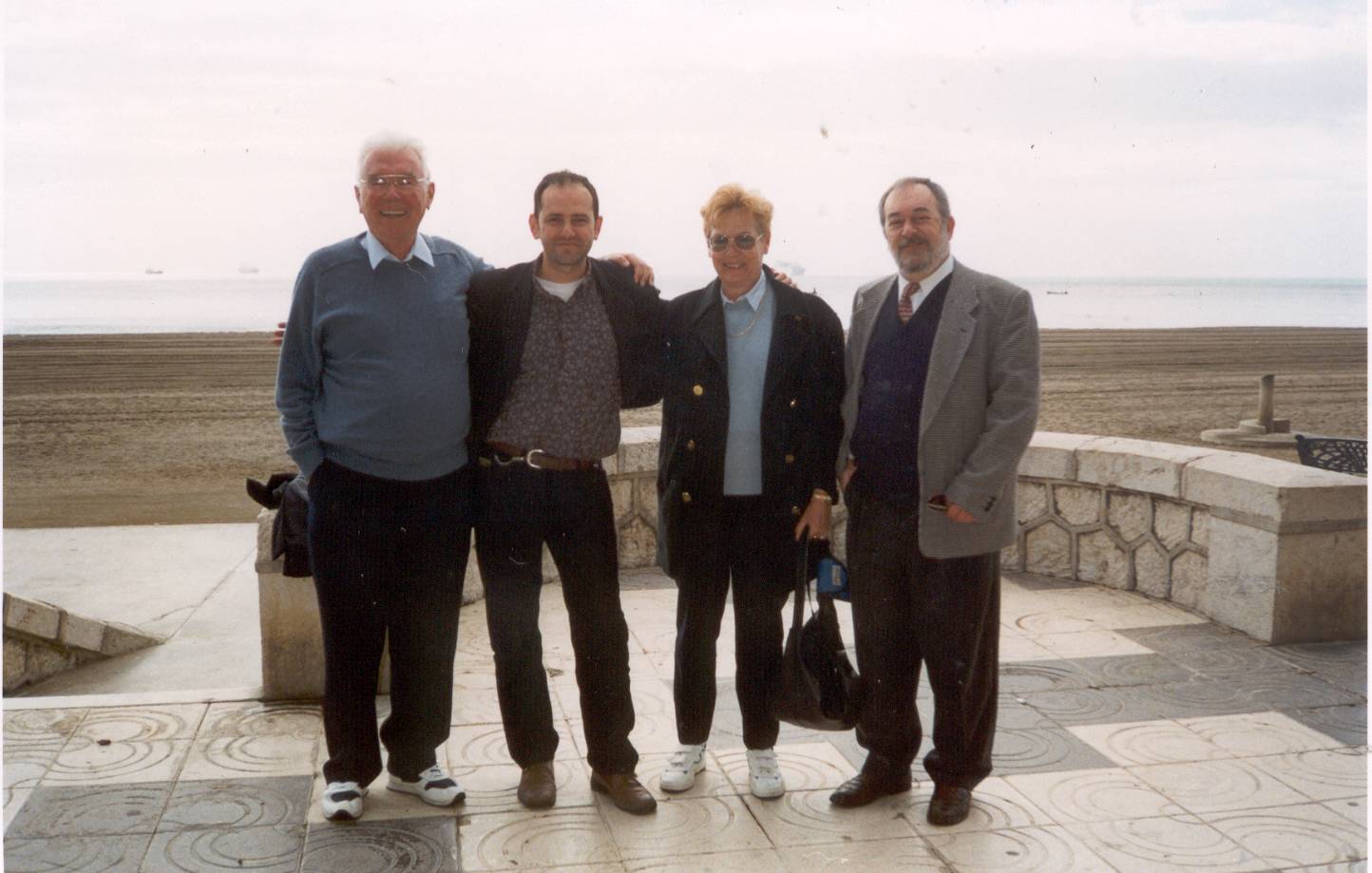 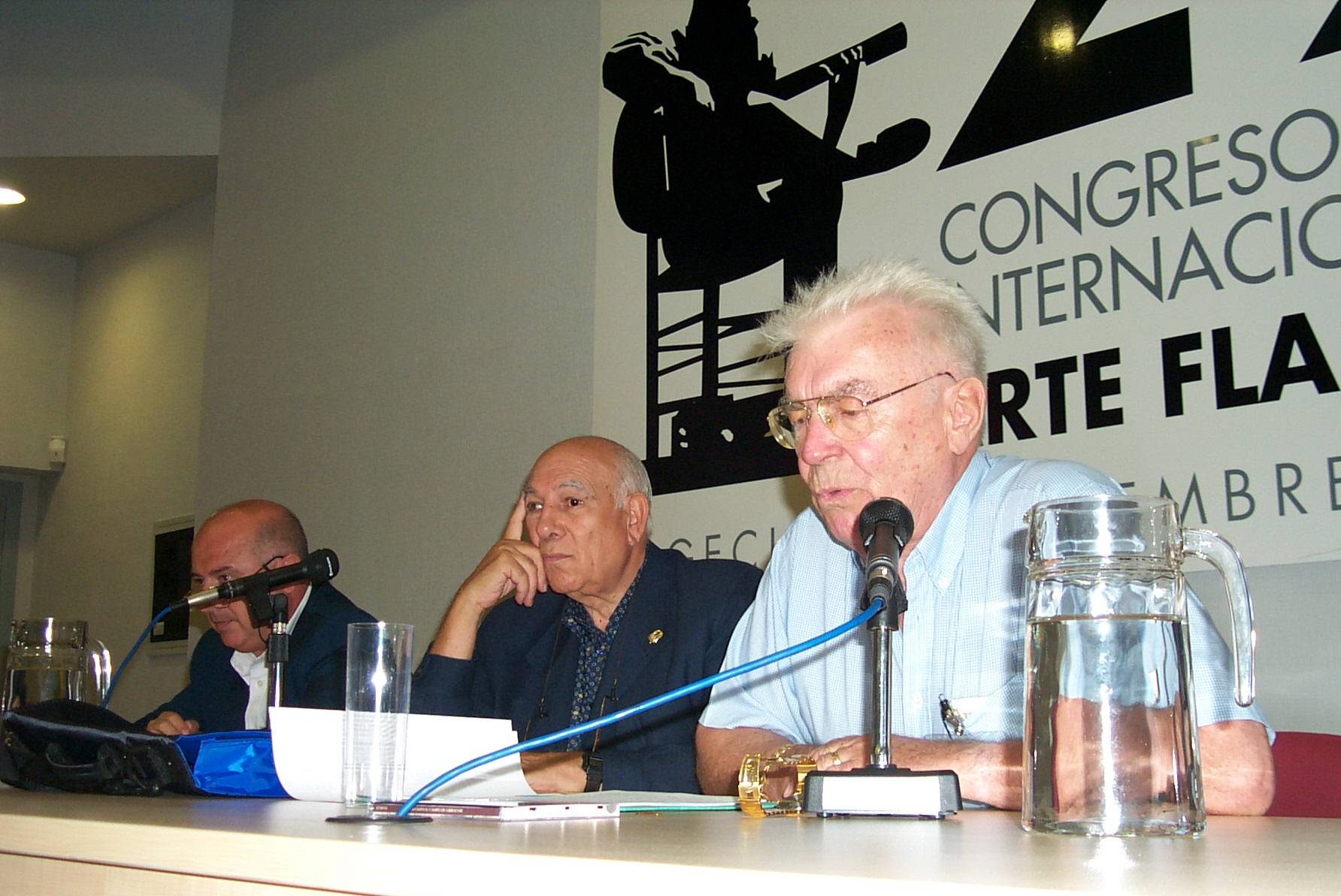 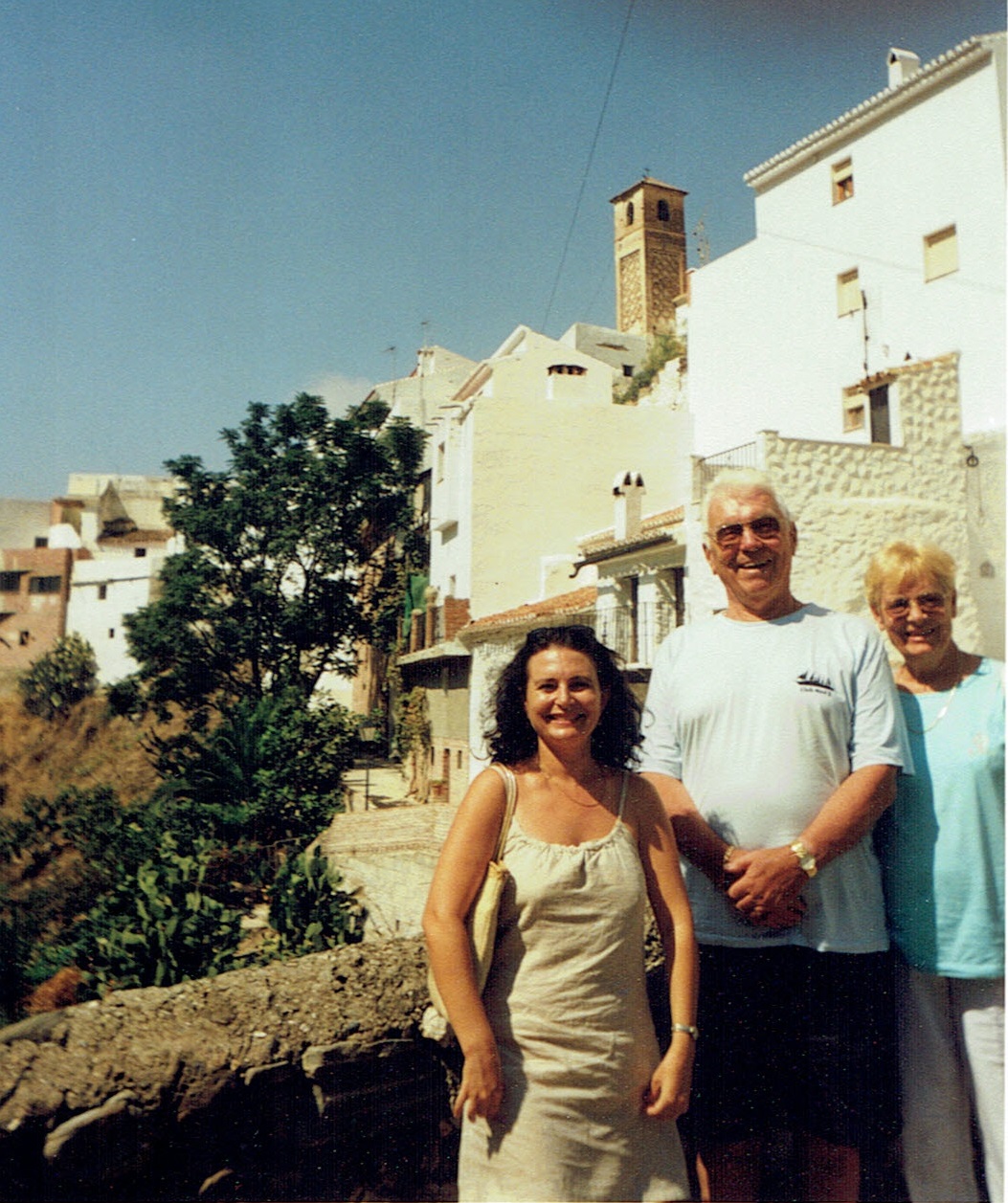 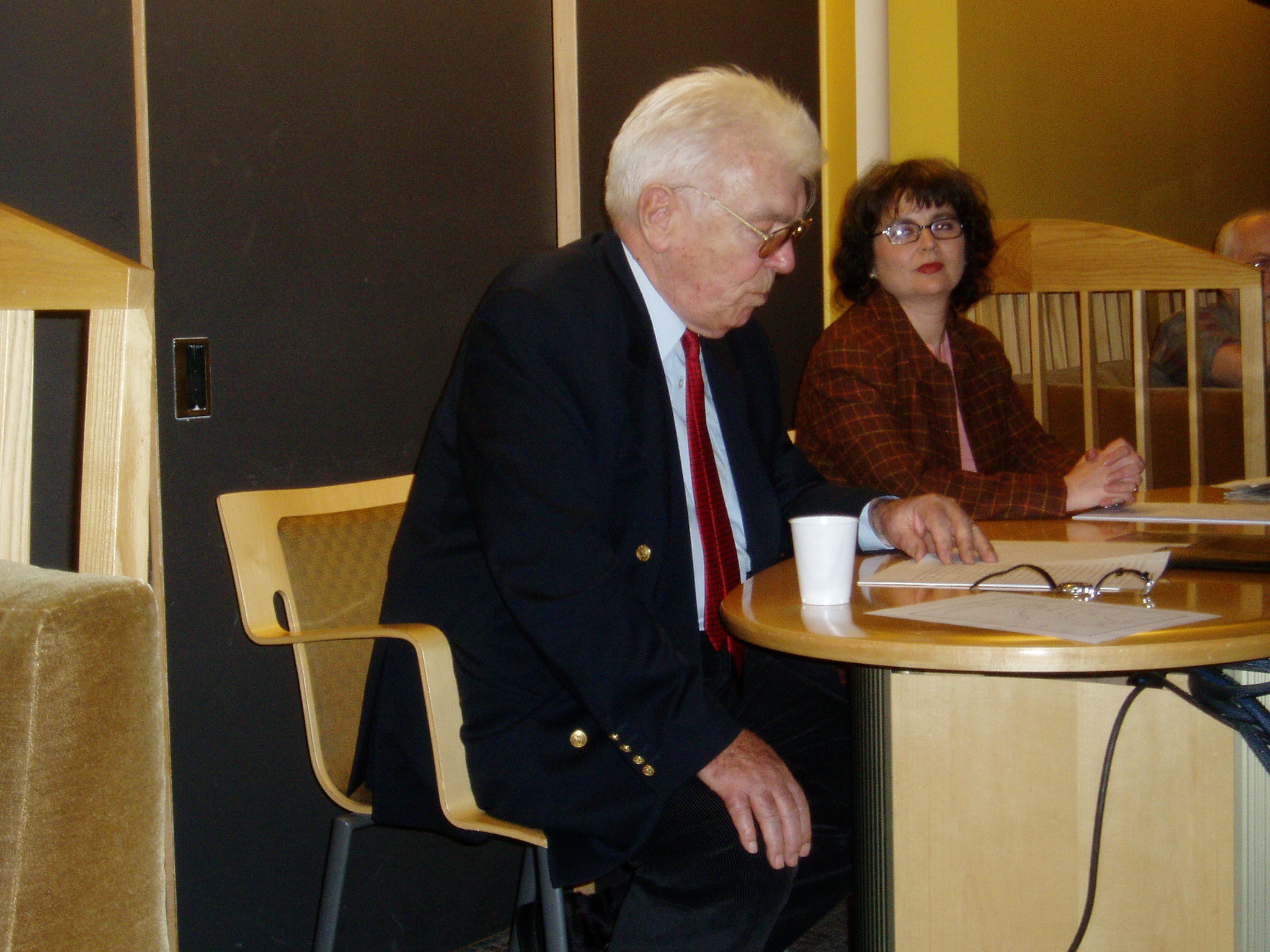 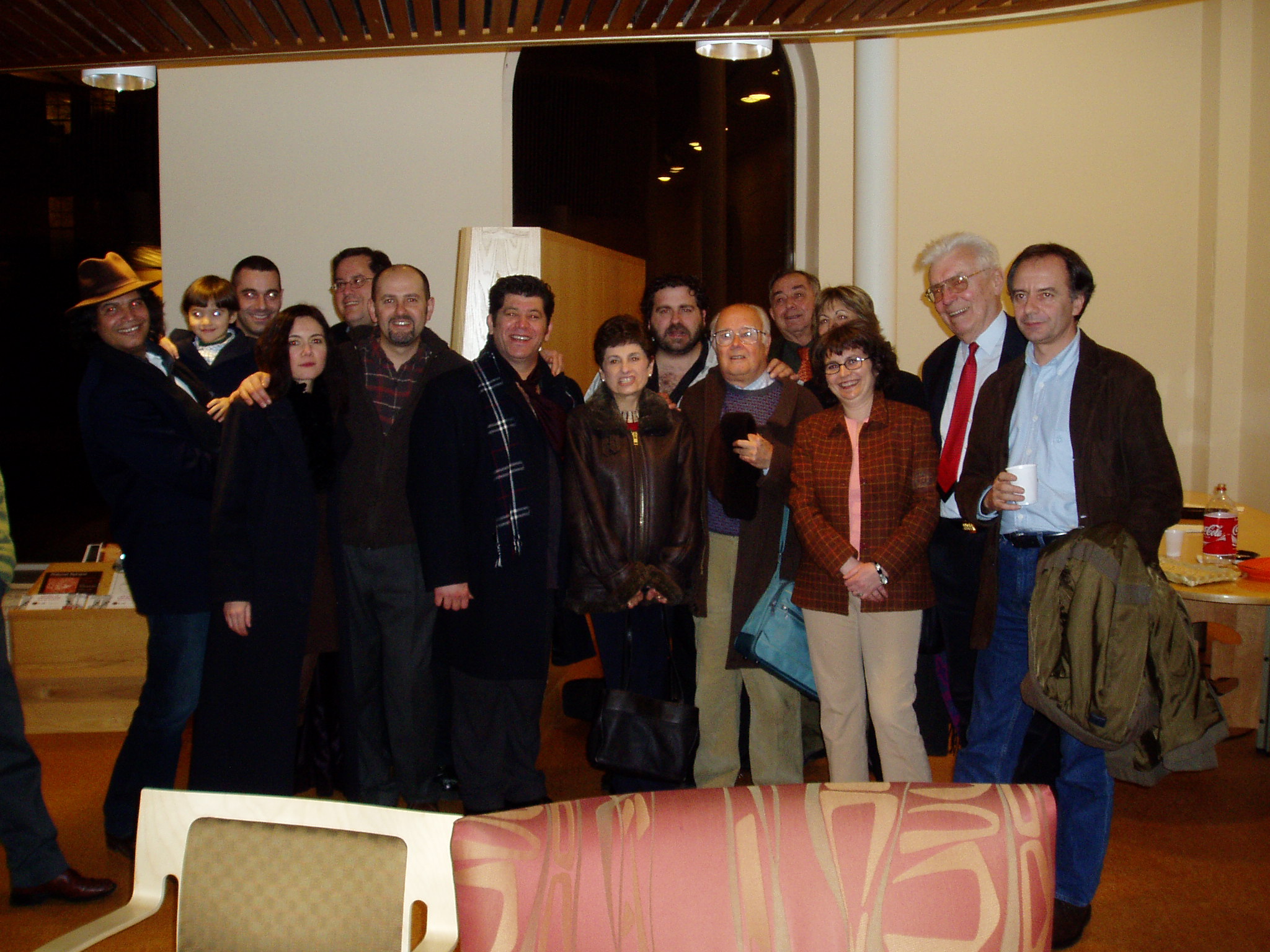 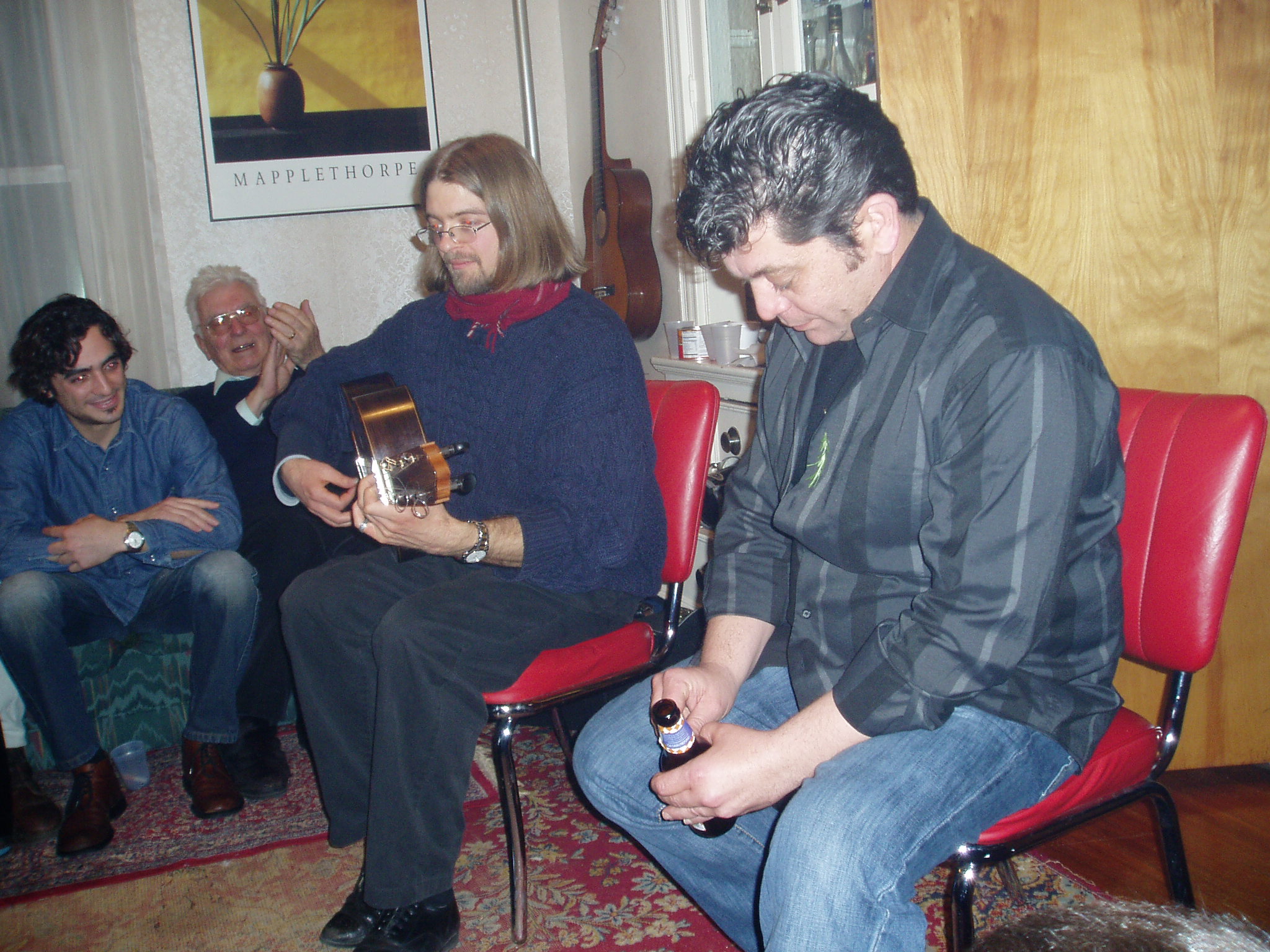 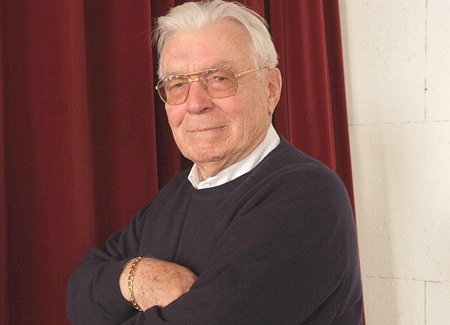 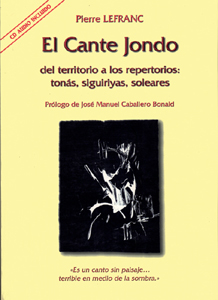