“La Unión just gave me a dance of taranto, and a Goya-style jacket”

This artist, grandson of Farruco, and son of La Faraona, criticizes the way he was treated at the Murcia festival as he prepares new projects for Miami and New York, and he hopes to debut his next show at the Bienal de Sevilla.

“The La Unión festival cost me money”.  Although I'm talking to a member of the one of the most respected families of flamenco dance, the conversation with Juan Fernández Montoya, doesn't start out talking about his grandfather Farruco, or his mother La Faraona, as would be typical.  He gets right into a controversial matter: that of his participation in the Festival de Cante de las Minas, where he won the Desplante prize for best dancer in 2014.  Barullo is angry.  Which is why, when asked about what he got out of La Unión, his answer is cutting: “I got a taranto dance, and a Goya-style jacket”.  He says he used the prize money to pay his artists and cover the cost of going to the contest, and on top of that, he was never given the performances that were promised as part of the prize. “They really pulled the wool over my eyes”, he says without hesitation, “they told me that being the winner, I would be called by some guys to confirm three gala performances, but that never happened.  I called to see what was going on, and the explanation was that they didn't offer me anything because they thought I wouldn't be interested in the money being offered”. 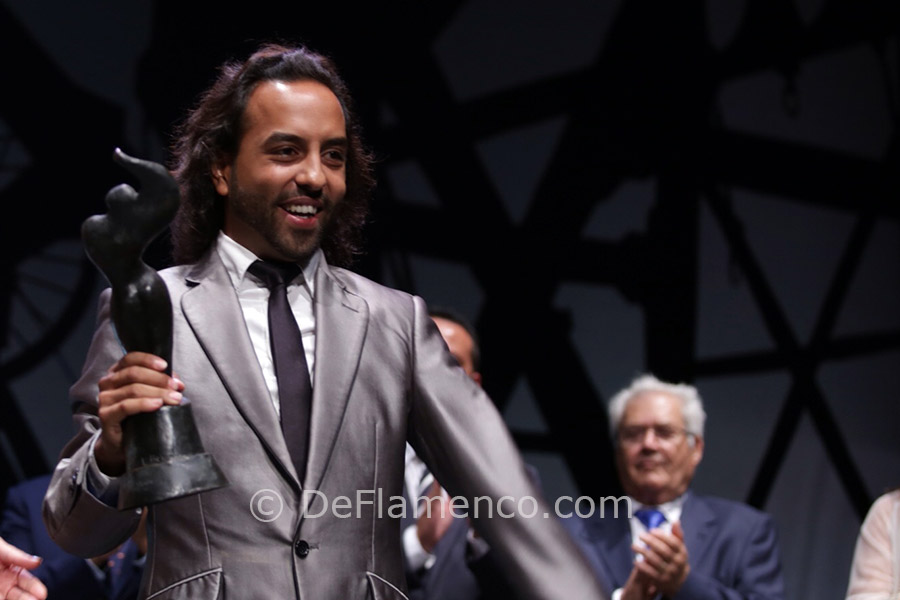 Barullo gets worked up about the whole thing.  Mostly, he explains, because he never asked to go to La Unión, but rather he was asked to sign up.  “With all my respects, I don't go to La Unión to come home with a statuette, I went because they asked me to, and because if I won, I was supposed to have work”.  He says “with all my respects”, but his tone of voice reveals he has none whatsoever for the organization that, he claims, tricked him.  “Manuel Navarro and the mayor treated me well, but their answer to my complaints was always that they had nothing to do with it, because La Minas Flamenco Tour is an independent agency, and they're the ones in charge of the eventual performances to be scheduled”.  As far as he's concerned, there is no excuse because the festival uses the name of La Unión, and it's the municipal government that must assume responsibility.

“When they saw I was so angry, they said we would talk about a bigger project than the promised performances after the contest.  They offered me a contract in Japan to do three shows, set a choreography, participate in the panel of judges for the contest they do there and also, dance, and all for the fee I get for one single show.  I told them to up the offer, and never heard from them again”.

A Farruco dancer with a style of his own

Barullo feels cheated.  All the more so since he sees that other winners from the 2014 edition of the contest have indeed had performances as promised by the festival of La Unión.  “One day they asked me if I was proud of having been the first and only gypsy to have won the Desplante prize.  More than feeling proud about that, they ought be ashamed of themselves”.  Between one thing and another, he feels exploited, because the strange thing is that no other gypsy had previously won, “considering that there are some very great gypsy dancers”.

The rage he feels for what was done to him, has not kept him from his rehearsals with the preparation of various upcoming projects in New York and Miami, and looking forward to performing at the Bienal de Sevilla with his new show called Akharipen (origin).  En 2014 he presented “Cara y Cruz” in Barcelona, along with Farruquito, when his mother was still alive.  Precisely in that show, Barullo demonstrated he's a “Farruco” with a personality of his own.  Because the family traits aren't only noticeable in his face or his way of dancing, but also in what he says, and the timbre of his voice, which is similar to such an extent to that of his cousins, that by phone, it's hard to know which of them is speaking.

As if he knew this, Barullo stakes out his identity.  “I want to do things differently, I showed this in 'Cara y Cruz', where I dressed as a classical dancer, asked forgiveness from the greats and went out to dance”.  In that show, true enough, Barullo showed his personal way of doing things, he put on tights and danced siguiriya with drums, one of those things for which he apologized to the greats.  “I do it because I can get away with it, because I know that even like that, whatever I do is flamenco”. 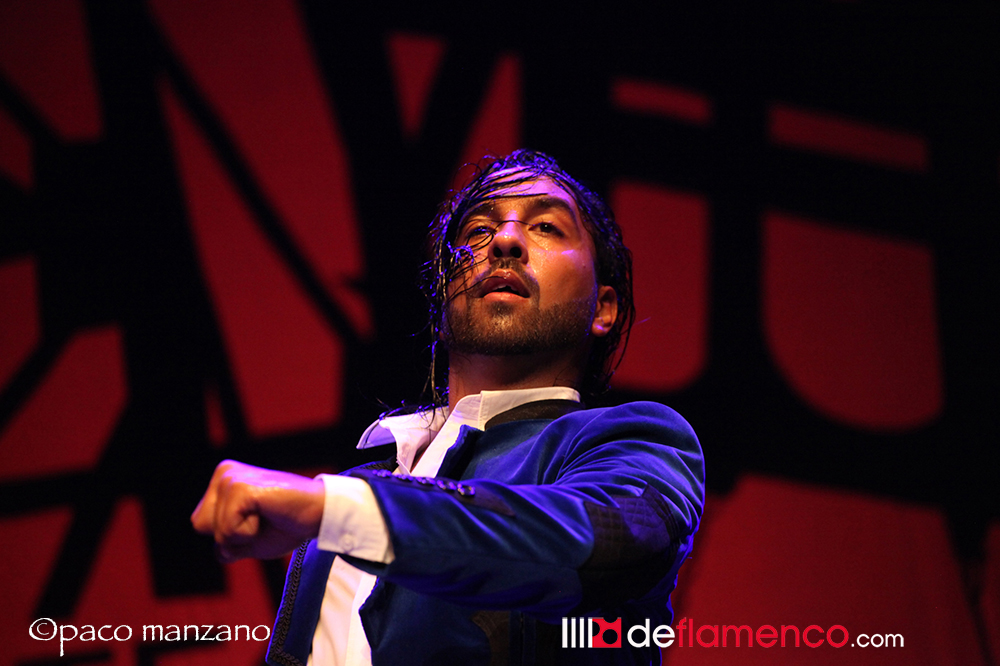 A conservative, not a purist

This young dancer of 25, has been dancing for 20 years, and just like all his cousins, his artistic name was given him by Farruco.  “He told me that whenever I danced, I had to raise a ruckus, “barullo”.  So that's the name  he gave me, and I love it”.  He's young, but hardly knows what a discotheque is, nor does he move like most young men his age.  “My life-style is different, I'm gypsy, and we have a way of looking at life that's very close to the family and our traditions”, he explains from Seville, mentioning his mother “La Faraona” several times, who died a year ago.

Barullo has a very clear idea of the art he is devoted to, and is very critical regarding the current moment of flamenco. “Flamenco followers are disoriented, and I blame the artists, sometimes we support things that we shouldn't be supporting.  I'm not the best, but I'm a professional, and I know other people get up on stage and manage to get work doing things that have nothing at all to do with flamenco”.

And what is, and is not flamenco?  “Flamenco is a way of life, and flamenco has all been invented.  You can fine-tune here and there, a feeling of your own, but nothing new is going to be invented”.  When asked if that isn't a rigid position, and therefore contrary to art, he has an answer.  “I'm a conservative, not a purist.  You get tired of being told 'you're of the Farrucos', 'you're racial', 'you're a gypsy'… You get tired of the labels, and I like to think I'm able to do anything, but I can do it respecting the flamenco I come from”.  He knows he isn't completely answering the question, so he adds: “I can put on tights and dance a siguiriya with drums, but I'm the grandson of Farruco, and son of La Faraona, and I like to do what they taught me.  That's not being rigid, it's honoring my roots”.

Flamenco as a way of life

When he says these things, it's easy to think he is expressing an outdated idea of flamenco.  “As far as I'm concerned, there's nothing outdated in flamenco, there are classics”.  Barullo, like the rest of his family, lives it as a way of life in which they dance, live, celebrate and cry in a flamenco key.  “Flamenco isn't a bilingual school.  In my opinion, it cannot be, I don't go into the studio and I'm flamenco, and if I go out of it, I'm something else”.

And since sometimes it's better to give examples than to theorize, Barullo explains which dancers he likes. “My cousin Farruquito, Pepe Torres, Gema Moneo, Alfonso Losa, José Maya and Jairo Barrull are people I admire“.  All the mentioned dancers, gypsy or not, are heirs to a kind of flamenco that touches the nerve defended by Barullo's grandfather.  Flamenco that separates men from women, profound flamenco that permits flashes of modernism, but never a full spotlight.

Juan is building new plans, but he's still hurting from what La Unión did to him, and he feels the need to explain himself to close this chapter: “Before the contest, I was Barullo, and I'm still Barullo.  La Unión did nothing for me”.