The quote is from Harold Bloom in “Shakespeare, the Invention of the Human”.  He is speaking about King Lear and Macbeth, plays in which a storm and a forest are as much central to the story as the people who suffer all sorts of calamities.  Like Rocío Molina's fall at the beginning of Bosque Ardora, when a horse pulls her in the middle of a lake in the middle of a forest which in turn is in the middle of nowhere. 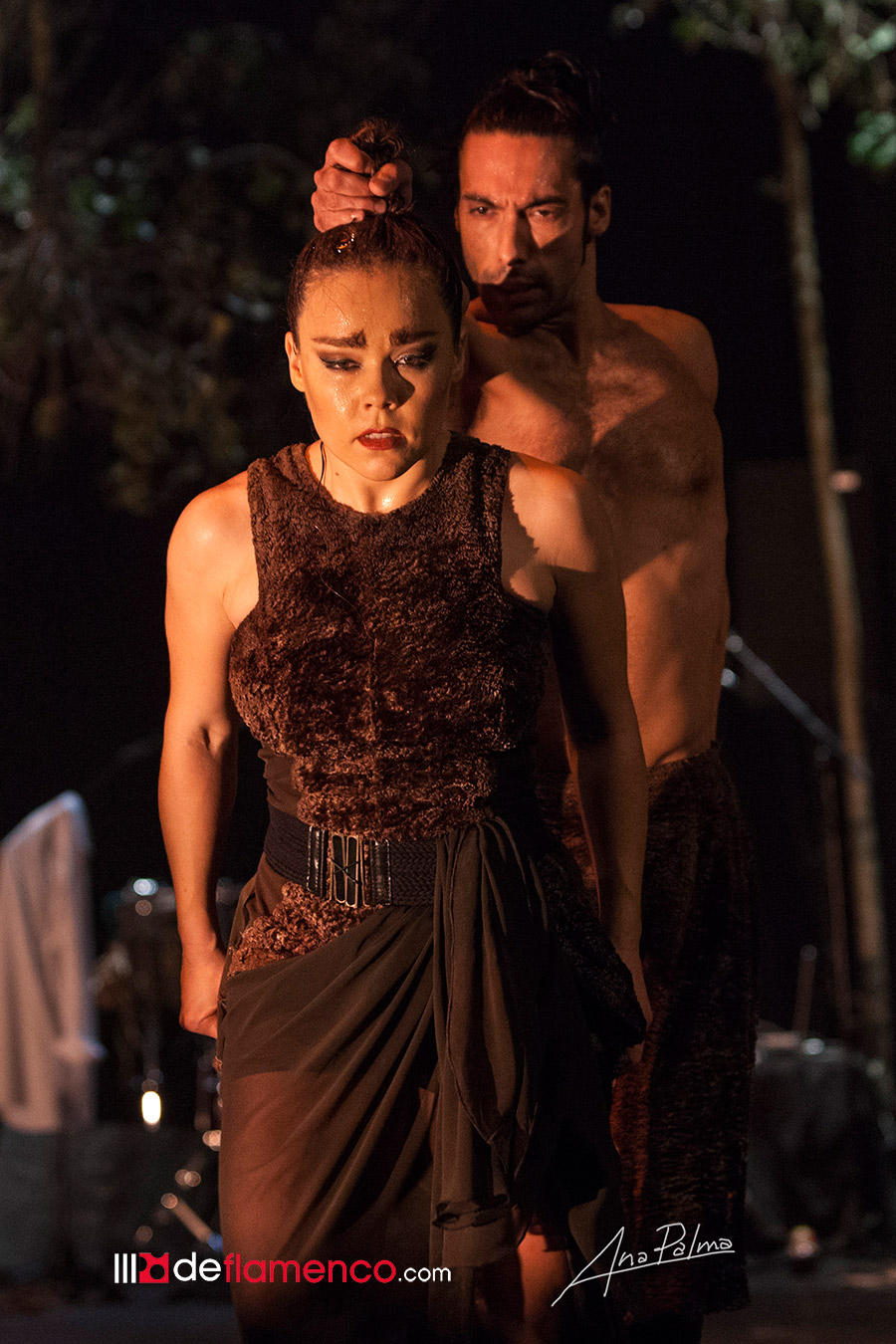 In Bosque Ardora, everything seems like a nightmare: the story, the scenery and the people, everything has at least several meanings.  Decoding this story is of no use, because there are many interpretations, but I'll take a chance with one.  This is not a story about the battle of the sexes, nor of a wounded or fleeing female.  It's about human beings, about one attracted to controlling and accumulating power with which to construct and destroy and modify the surroundings.  That being personified by Molina can be a man or a woman, especially if we accept that everything is a dream, terrain in which nothing has a single clear role or use.  Skirts for example, are worn by the three male dancers, and she's a woman because we know her, but she could be neutral, male or female.  Or animal, because the way mating is presented, that's how it seems at times.

The central being passes through two phases: she falls, gets up, mates, is pleased with herself, pleases and is sensual and irrational.  She takes form and becomes civilized, but the clothing, the roles and the loss of innocence don't make her any happier.  The final metamorphosis occurs when Molina wears a dress of earth-tones, and dances a hypnotic soleá in which she becomes tree-like.  And the tree ends up becoming the forest.  At that point, the nightmare-dream has a surprise ending that turns this show into a high-level piece of theater.

Molina, Eduardo Guerrero and Fernando Jiménez dance as partners, as a trio, and they meet and part to mate once again and separate again.  They hit each other, they love, they mistreat, they misunderstand and reunite in a high-level dance, primal, savaje, original.  Like flamenco.

Rocío's body, whether in the sensual movements, syncopated or profound, shows no novelty in eloquence: it's still perfect.  It's the intent and the message that have moved up a notch.  But have no fear, it's not complicated.  Bosque Ardora can be seen as it if were Little Red Riding Hood or Shakespeare's The Tempest.  There are many possible levels of interpretation, but it's beautiful and unsettling, it questions and surprises.  It makes no difference whether or not it's flamenco, because it's sublime, and one single heel-beat of Rocío's silences three people.  Towards the beginning there was some murmuring among the unbelieving audience, but then there was silence at the end of the show, and all those present applauded, and some cried.

The level of dance, technique, creativity and staging have no equal with anything you see on stage in this country. The quality and precision of each and every individual on stage, trombone-players, percussionists, palmas, singers, guitarists and dancers, is excellent, and fit like clock-work.

As far as the references, there was nothing on the program, but the text was reminiscent of Shakespeare, not only in the tragic moments, but also in the way of building the context and its importance. Furthermore, there is something of the deep and irrational tone of the poems of Alejandra Pizarnik, especially those which allude to the forest, the recurring setting and motivation of the Argentinian's verses:

“I speak as on the inside. Not my obstinate voice seeming to be a human voice, but the other one which knows I never stopped dwelling in the forest”.

That's how she said it in Extracción de la Piedra de la Locura, and there's something of that in this work by the Málaga dancer, a work in which the inside and the outside become blurred, forcing the observer to question at what point does a tree lose its singularity and become a forest; what is the boundary that separates animal from human, or is there indeed any difference between a being and its context.