art for the Art
Professionals know

The program commenced with Preludio y Soleá with
Belén Maya twisting serpentine in a white bata de cola around
Mayte Martín, a singer who I had never had the pleasure of
hearing live until this night. In that number Srta. Martín
was utterly dashing. Dressed as a man, moving as a man, singing
as a man, it was totally natural and suited her to the ground. In
fact it was indeed a pleasure to experience her powerful, yet surprisingly
tender voice. This singer from Cataluña has a range that
most men would kill for, yet unlike any other contemporary Spanish
cantaora, she emotes a spirit distinctly her own. I salute her style,
and hope to witness her tremendous voice at least once more before
I die.

I was not prepared for Srta. Maya’s distinctive style which
took me by surprise to say the least. Her staccato movements in
Vidalita made for an incongruously positioned body, moving to the
compás in amazing perfection. For this reviewer, such an
independently singular style became an acquired taste. All I can
tell you is that by the end of the show, I was on my feet shouting
and clapping (like everyone else in the theatre) as furiously as
she herself had danced!

A powerful, yet surprisingly tender
voice…a spirit distinctly her own. 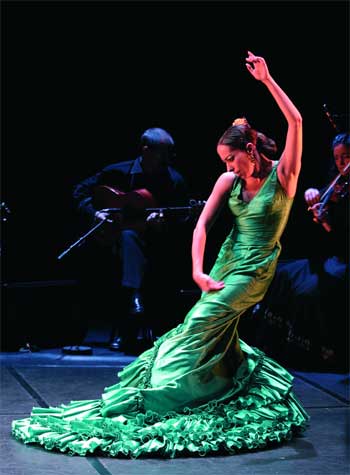 I was impressed with her footwork, but the more dazzling aspect
of her presentation has to be the angular and rhythmic movements
contained in her armwork, as particularly evident in the Guajira.
These almost superhuman moves were raw, balanced, powerful, and
inspiring. She literally brought the house down with her final dance,
using the bata in ways I have never seen. Could another bailaora
execute anything so difficult with such agilty, speed and grace?
The jury is out on that one. Perhaps, but so far, she’s the
first one I’ve seen work that tail into ‘next weekend’.
You have to give her credit, she was running on fumes, due to a
severe cold or flu, one can’t tell, since she did cough and
sniffle her way throughout the numbers. We all wanted to put her
to bed with some Dristan, but were too mesmerized to do so –
she commanded our attention totally, as only a flamenco diva of
her stature can do. She came up with the holy trinity of Sara Baras
and La Yerbabuena, the youngest of the three, and lived for a short
time with her mother in California. No stranger to the States (she
was actually born in the US while her parents Mario Maya and Carmen
Mora were on tour), it was as if she'd choreographed this production
with us in mind.

There is a tremendous amount of angst, grief, and intense longing
in her work. It causes one to ponder the inconsistencies of life.
Why do bad things happen to innocent people, why do some grow rich,
while others go mad? Things of that sort. She’s here to express
what we are thinking, feeling and dreaming.

The almost superhuman moves were raw,
balanced, powerful, and inspiring.

My kudos also given freely to Sr. José Luis Montón,
a guitarist of tremendous artistic sensibility who pours his personality
into his playing. The piece entitled Interludio was sheer magic.
He’s another face I hope to encounter again…and soon.

This was a flamenco show very close to my heart, and
will be a fond memory for years to come