Guitar, dance and voice. The three elements of flamenco
passion flowed freely though the Aula Magna of the Colegio de Médicos,
that temple of rational scientific thought. How could don Santiago
Ramón y Cajal ever have imagined those four walls, between
which he explained the most intimate intricacies of our nervous
system, one century later would reverberate with the intangible
emotion of an art form which can barely be described or annotated.

As has happened in the past, the audience’s warmth supported
the performers at every step, but Gerardo Núñez managed
to raise that temperature to the boiling point no sooner than the
show began. The man from Jerez is an expert in constructing ambience
and climax, and he has the ability to create simple, moving, universal
melodies that he develops to the utter limits. Gerardo weaves a
musical spider-web that eventually entraps every listener, first
via the heart, and then the mind, taking you from tears to joy.
Two worlds of expression he manages to unite by the use of carefully
constructed transitions which always hit the mark. The trio is completed
by Cepillo on percussion, and the wonderful Pablo Martín
on upright bass. The audience broke out in applause even through
parts of the recital. 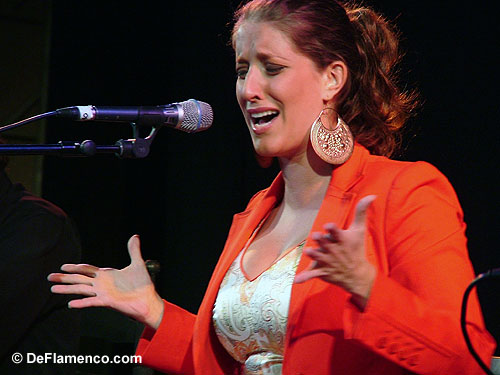 It might have been better had Argentina opened the program instead
of Gerardo. It was hard to outdo the level of excitement the guitarist
had generated and the young woman from Huelva suffered through that
responsibility. She sang quite correctly, but never managed to cut
through to the soul. Not only the order of the program worked against
her, but she was also extremely nervous. Argentina is in the process
of being presented to society you might say. She just released her
first recording and her desire, almost an absolute necessity, is
to rise brilliantly to the occasion and be worthy of the attention.
Even so, she sang valiently and professionally, especially the siguiriyas.
But she is capable of much more. Argentina loves flamenco, she has
knowledge, a voice and plenty of energy to carve out her own niche.
It’s just a question of mind over matter, emotion over intellect
in order to freely express everything she’s got inside. 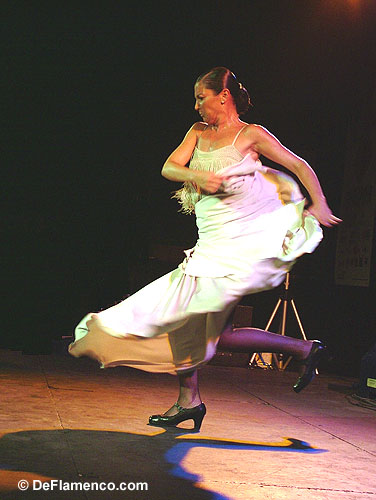 After intermission, the apotheosis. Sara Baras continues to demonstrate
her fierce talent. From the tip of her head to the tip of her toes,
Sara turns her entire body into an expressive machine, feet, legs,
hips, back, shoulders, arm, head, eyes… Everything. Her command
is absolute. A human body at the service of flamenco. Sudden force
and control, she dominates both. Sara Baras drove the audience wild
in that auditorium where Ramón y Cajal racked his brains
explaining his investigations of how neurons transmit messages to
the brain.