All Spain rejoices when Rafael Nadal, Fernando Alonso, the Spanish soccer team or any of our top sportsmen receive international recognition.  Seeing an audience of undoubtedly high musical and cultural level such as that of Moscow give a standing ovation to Dorantes, Belén Maya and Andrés Marín is also a source of pride.  Quality flamenco often enjoys this kind of success.  And Spain’s image grows each time. 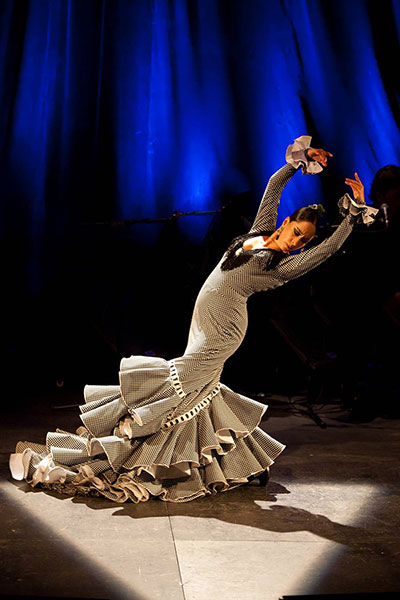 The second Flamenco Festival in Moscow set its own high standard: only a good product can thrive in times of stressed cultural budgets, and even moreso with regard to flamenco.  To support this kind of event in these economic times is truly meritorious, but in order to get a foot in the door you have to provide first-class ammo: Belén Maya, Israel Galván, Isabel Bayón and Rosario Toledo among others were featured in the first edition in 2011.  This time it was Dorantes, Andrés Marín, José Valencia and Belén Maya.  Flamenco-wise, Moscow is practically a done deal.

Flamenco is not a monochromatic artform by any means.  Traditional aesthetics share space with the most experimental adventures, and best of all, there’s demand for all of it.  The festival organizers took this reality into account, and it was reflected in the program.  The event was opened by Andrés Peña and Pilar Ogalla with “A Fuego Lento”, a classic and well-done piece that both dancers defend with passion and good taste.  Flight schedules made it impossible to catch the performance, but we heard of the great success it enjoyed.  The second major appearance at the festival was that of Dorantes, who arrived with the backup of dancer Úrsula López, and a very interesting Javier Ruibal on percussion.  Dorantes laid out his recital as a medley of his best-known repertoire, and the Moscow theatre-goers, who have a great understanding of music, were impressed.  In fact, Dorantes was made to repeat his Orobroy in the encore.

With only percussion and piano, the music of Dorantes triggered moments of great intensity.  His music and rhythms were perfectly accompanied and shaded by a splendid Javier Ruibal, and dancer Úrsula López displayed great virtuosity putting movement to the audio world that Dorantes and Ruibal constructed on stage.  A night full of warmth and color in Moscow.

The evening of Saturday the 17th, dance ceded center-stage to cante and to parallel activities.  At the center of the Moscow Instituto Cervantes, actor and playwright David Montero gave an interesting conference about the history of flamenco staging.  David Montero has a great deal of experience not only as an actor, but also as director.  Yours truly gave a talk about the flamenco phenomenon from the viewpoint of gypsy families.

José Valencia and a bad conscience

The same afternoon, at Moscow’s Café Art Durov, José Valencia presented his first recording, “Sólo Flamenco”, with the guitar of Salvador Gutiérrez.  The singer who recently won the Giraldillo of Cante at the Bienal de Sevilla, gave a very complete and impeccable recital that should stir the conscience of those singers who make it to the top, to festivals and big budgets, with much less.  This artist has plenty of repertoire.  Listening to José Valencia you have the feeling of being eye-witness to the making of flamenco history, the true history of flamenco.

The following day, José Valencia participated in Andrés Marín’s creation, “Vanguardia Jonda”, a show that has been around for a while although we’d never seen it before.  A very sober work, but very intense, that featured Antonio Coronel on percussion, Salvador Gutiérrez on guitar, Pablo Suárez on piano, the cante of José Valencia and dancer Andrés Marín.  Just five artists on stage, but they managed to conjure up truly memorable feelings.  The entire show was brilliant, but the soleá was an important highlight.  José Valencia, Pablo Suárez and Salvador Gutiérrez joined forces, got on the same wave length and let themselves go.  And when there’s communication up on stage, the audience comes to life with excitement, which is exactly how it was.

The parenthesis of Pablo Suárez

Open parenthesis…  Pablo Suárez is one of the most interesting artistic personalities to be found today in flamenco.  And it’s precisely because of that, his personality.  His piano, his music, I would even say his soul, is perfectly identifiable.  Many performers are looking for a personal stamp.  Pablo Suárez already has it.  And what’s more, it’s truly beautiful.  It’s not the first time that this magazine has expressed its desire that Pablo Suárez decide to record something on his own in which he takes center stage.  It’s true he’s had memorable collaborations, such as with Rafael Jiménez “Falo”, and at the present time he has just presented “Avant Garde”, the new record of Camerata Flamenco Project, which is the group he’s involved with.  But even so, we miss seeing him do something more on his own.  Close parenthesis and we return to Moscow.

The exquisitely melancholic sensitivity of Pablo Suárez found the perfect counterpoint in the expansive, almost savagely pained singing of José Valencia, and the contrast really worked.  It was quite an experience for those of us who happened upon Andrés Marín’s show.  A work in which, according to Marín, most of the dancing is improvised: “one form carries me into another.  Of course that has its risks, but that’s where the freedom is”.  Andrés Marín had a good time, and gave the audience a good time as well for a memorable night: a kind of small-scale flamenco jam session with excellent results.

The powerful closing was handled by the team of Belén Maya and Manuel Liñán who presented “Trasmin” with the singing of José Valencia and Niño de Elche, and the guitar of Rafael Rodriguez.  It was not possible to attend this performance as we were already on our way back to Spain, but by all accounts it was the show that most filled the theater.  Two solo dances each, in addition to a duet of Liñán and Belén is the structure employed for this tradition-based work.

It must be noted that along with these stars from Spain, there was also room for Moscow flamenco.  Dancer Eketerina Che offered two shows, one in a more traditional vein, “La Vida Nueva”, and another built around a story-line, “Tú mi Todo”.  In the first, Ekaterina Che was accompanied by the Chilean dancer who lives in Seville, Juan Aguirre.  Although he lives in Seville, he has considerable prestige in Moscow.  Juan Aguirre starred in another show along with dancer Israel Moreno, called “Soy yo? Eres tú?…Nosotros”.

Half a Festival de Jerez

With all the stars who passed through Moscow in this festival, there were enough to fill half a Festival de Jerez or a week of the Bienal of Seville.  A real treat for Moscow’s flamenco fans.  This artistic level could not have been achieved without efficient dedicated organization, and the help of the artists themselves, always ready to adapt to adverse circumstances that might come up.

In this sense the Festival Flamenco en Moscú is an interesting initiative in the way of administration, because it’s a Hispano-Russian co-production under the auspices of the Flamenco Center school, and the Spanish producer Endirecto FT.  A private undertaking that managed to receive public assistance from the Ministry of Culture, the Agencia Andaluza del Flamenco and the Moscow Cervantes Institute.

For decades flamenco artists have taken the name of Spain to all five continents, but fortunately the folkloric nocturnal image that used to be so popular is now forgotten.  Today, when the image of Spain is at a low point, flamenco is one of the few elements that continues to be exported.  Fans the world over continue to demand quality flamenco done with exemplary precision comparable to that of any elite artform and far removed from stereotypes.  Performers such as those who went to Moscow, among many other, are some of the finest artists who transmit the image of a modern country committed to culture and art, something worth betting on. 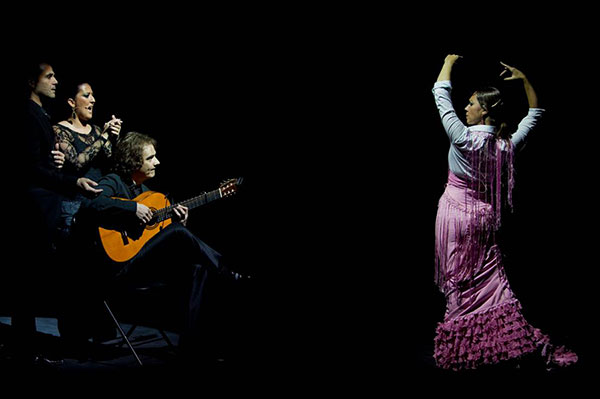 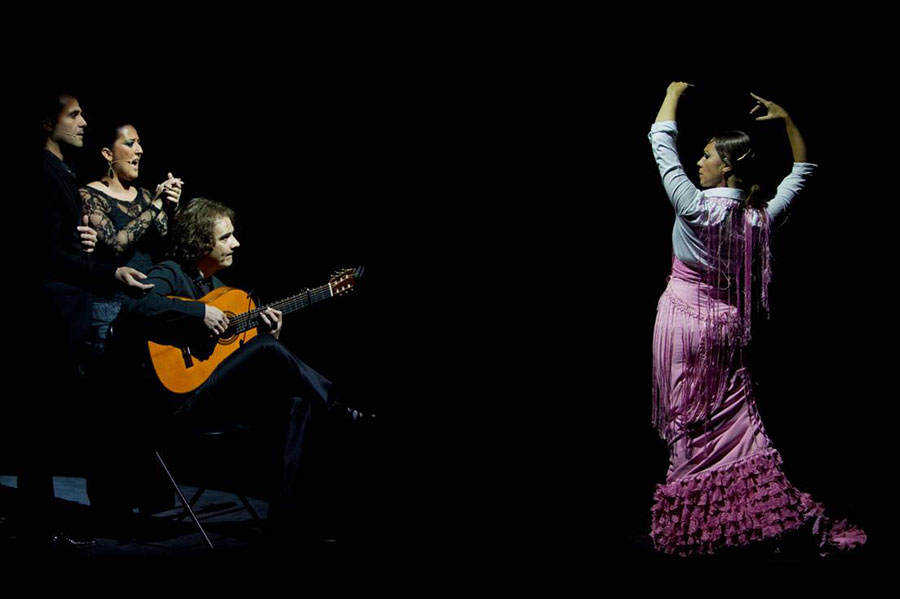 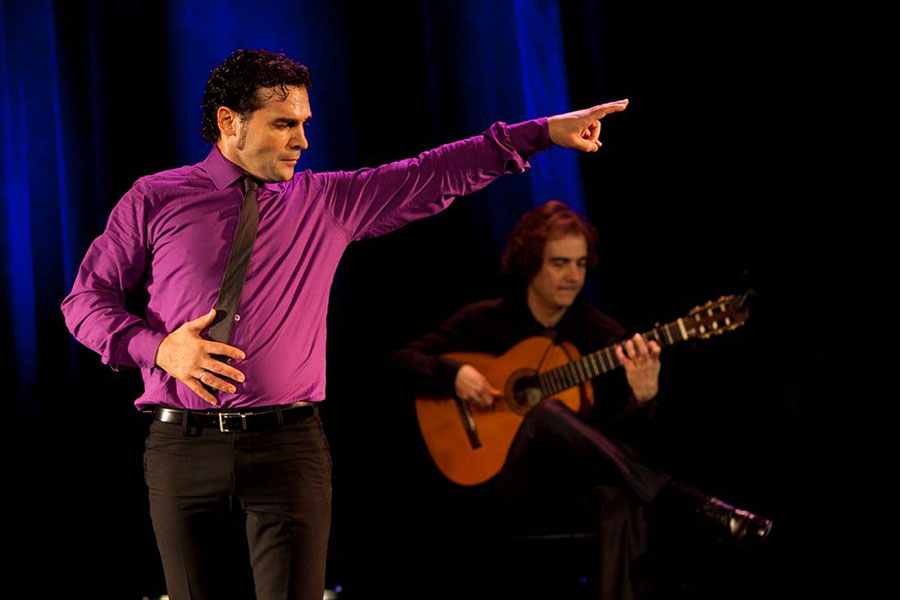 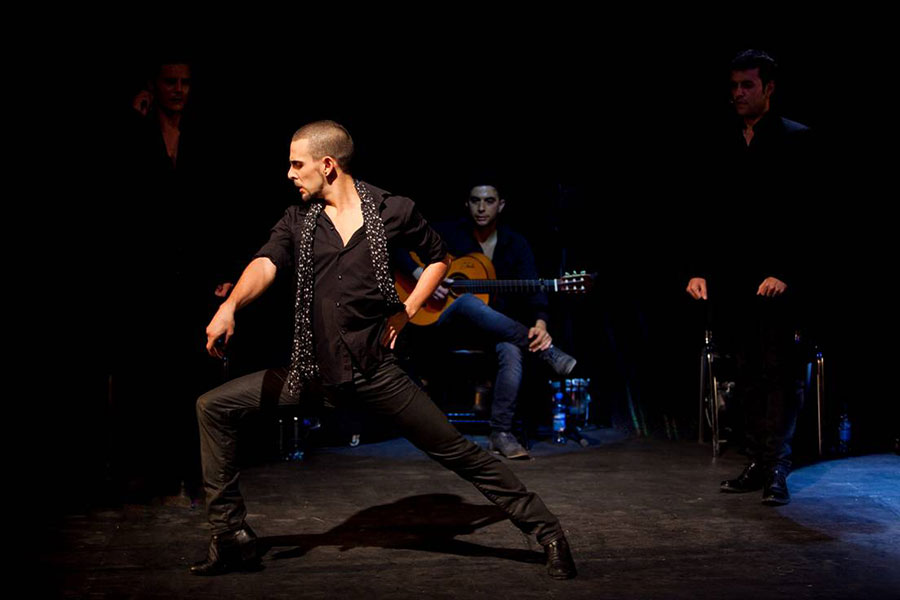 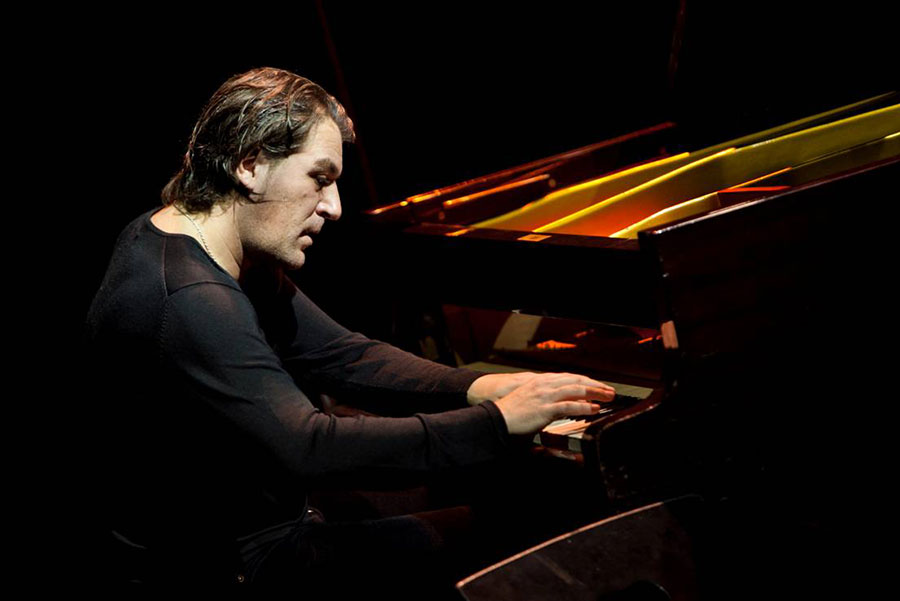 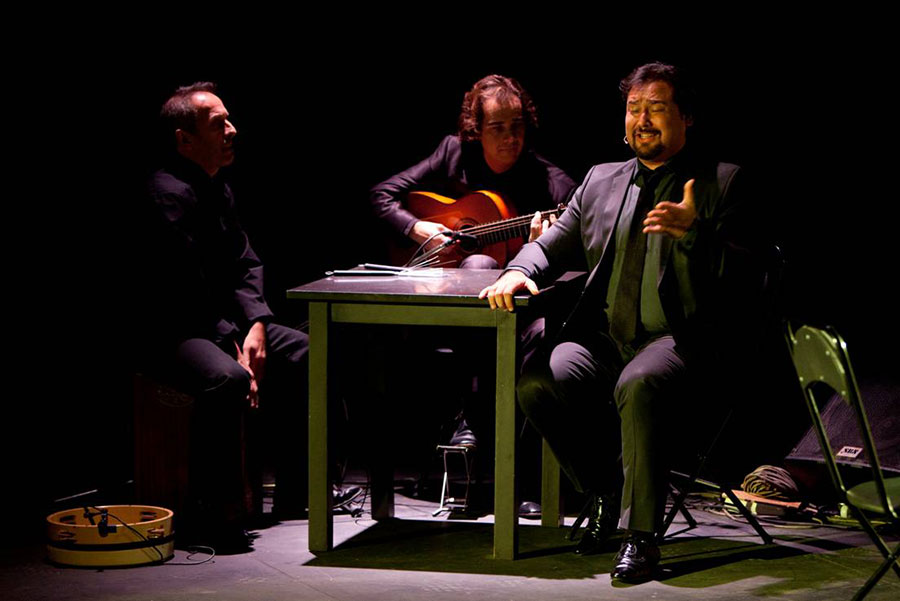 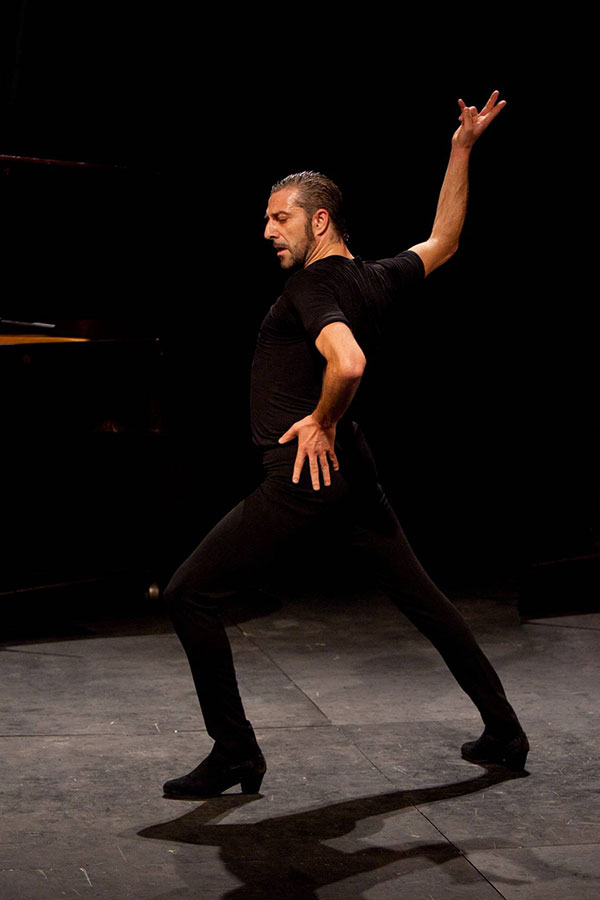 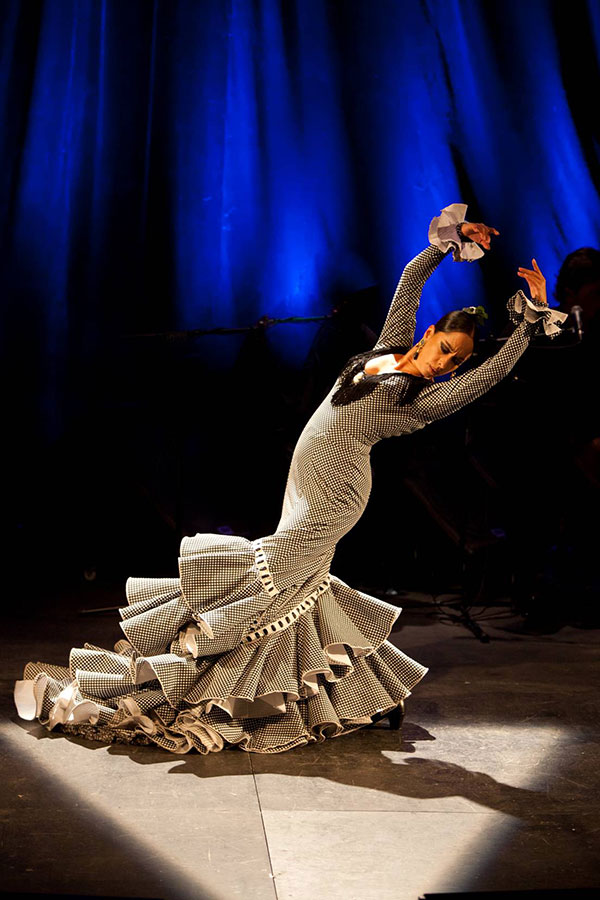 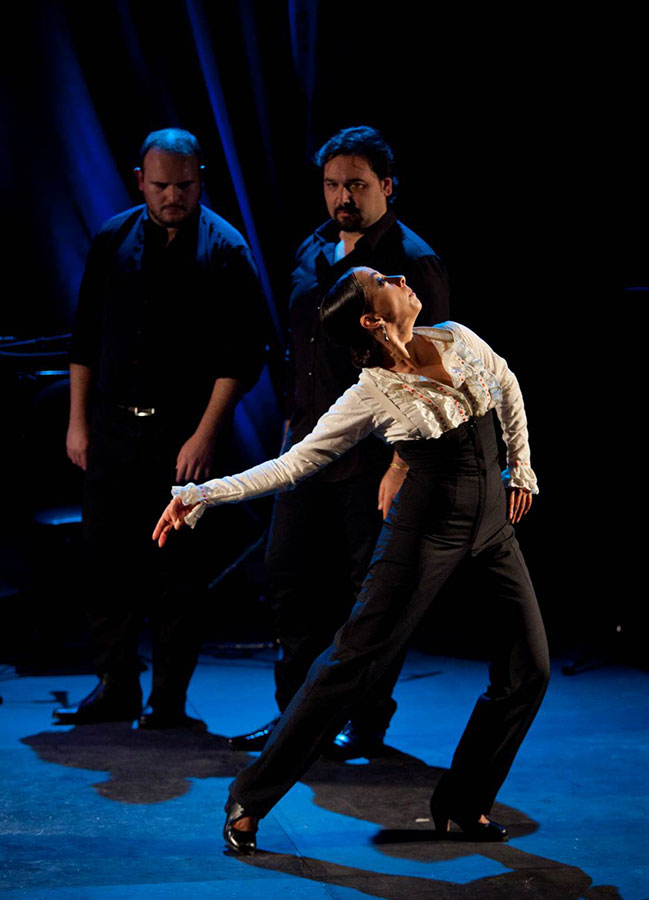