The recital with which El Pele opened the series Flamenco Viene del Sur at Seville’s Teatro Central lasted exactly one hour.  In addition to the closing bulerías he sang at the request of the audience who didn’t want to let him go.  An hour was all it took to drench oneself in pure Pele, “Puro Pele”.

And true enough, it surely wasn’t the best concert by this singer we’ve so often seen inspired.  But in the case of this Córdoban man, it doesn’t need to be his best to make your hair stand on end, to trigger emotions, to be convincing.  Because that’s how El Pele is.  Unpredictable, uneven, luminous, visceral, impulsive, expressive, sensitive, melancholic, weak, contradictory, great… an artist.  Always different, always new.  Which is why flamenco fans like him, and he attracts singers of all generations and styles.  Because El Pele only sounds like El Pele, and because he’s never the same.

He mostly hangs around the edges and writes the lines of his art on the reverse side.  Without footnotes or crossing anything out. Knowing that flamenco is also the quest, the error, the attempt.  Unlearn in order to move forward.  Delving headfirst into this struggle with each form, and inevitably getting the audience to want to join in his game.

Thus, his well-worn voice was the breath of last confessions, and his strength, the cry that sustains hope.  And everything, from alegrías to bulerías, passing through malagueñas, siguiriyas and soleá, was a slow natural narration of life, with its ups and downs, and its subtlety.  With emotion and anguish.  El Pele, who speaks what he sings, and sings what he feels.

It was a delight to see him close his eyes to journey to the nostalgia proposed by the exquisite guitar of Niño Seve.  Strolling through the measures accented by the hand-clapping of Torombo and Bobote, and growing into the joy of singing for El Barullo.  Together they blended into soleá por bulerías in which the feet of one seemed to want to answer the questions of the other, and vice versa.  Masculine, dry, earthy dancing, and the ethereal, damp, dreamlike singing of the other.  And the two of them together, smiling. 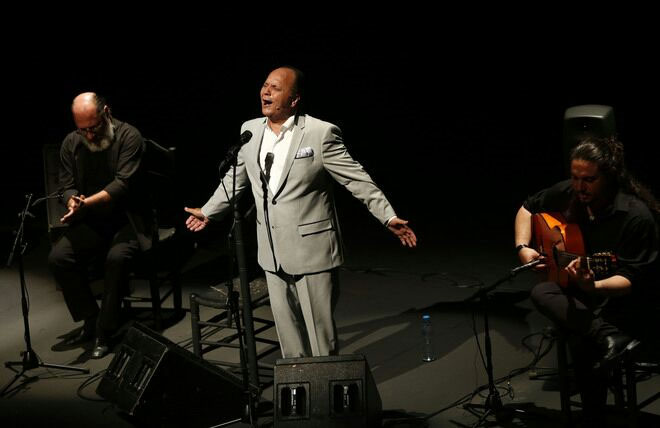