At Madrid's society of authors (SGAE), Miguel Poveda has presented the concert he plans to offer at the Las Ventas bull-ring in Madrid on June 21st to commemorate his 25-year career in music.

The Catalonian singer plans to celebrate his 25 years in the profession with a grand concert which will be a major challenge for him.  On June 21st at Las Ventas, the event is a musical journey through flamenco and all the music he has interpreted throughout his career: lyrical song, bolero, traditional Mexican music in honor of Chavela Vargas and even fado with Mariza. 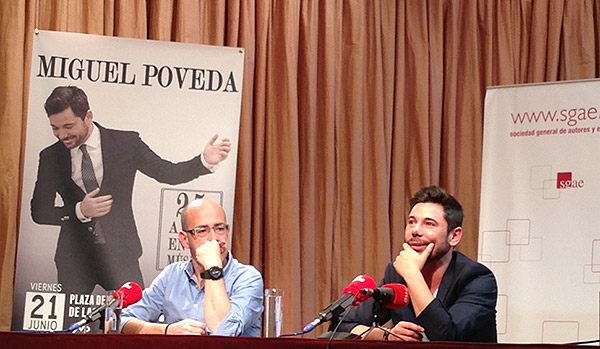 Miguel debuted artistically at the age of 15 in the flamenco association of Badalona, the city in which, only a few days ago, he gave the final concert of his tour “arteSano” which took him to the Teatro Real in Madrid, the Maestranza in Sevilla, the Liceo of Barcelona, New York, Vienna and Buenos Aires among other cities.  “arteSano”, his most recent recording, became a “gold record” during its first week on the market.

The show in Madrid has been created specifically for this day, a rundown of Poveda’s career shared with great artists and good friends.  A date to mark on the capital’s flamenco calendar and not to be missed.

The group is composed of Joan Albert Amargós on piano, Chicuelo and Jesús Guerrero on guitar, Paquito González and Roger Blávia on percussion with the voice of Londro, and palmas of Carlos Grilo and Luis Cantarote, Ana María González and Joaquina Amaya on chorus and the dancing of Susana Lupiáñez “La Lupi”.

Tickets may be purchased through the El Corte Inglés and Ticketmaster with prices that range from 25 to 60 euros, in addition to a limited VIP package that includes free parking, cocktail and merchandise.