The Andalucía region of southern Spain will be warming up the city of Santa Barbara, Saturday, March 21st at 7:30pm with the premier of “Cumbre Flamenca” (Flamenco Summit) for a special evening of spellbinding music and dance featuring internationally renowned flamenco dancer Domingo Ortega.

Born in Jerez de la Frontera, one of the cradles of flamenco in southern Spain, Ortega is known for his riveting performances as a soloist and innovative choreography. One of the top flamenco performers of his generation Ortega presents a dialogue and purity of work whose emotions are shared across time and physical boundaries. He demonstrates the percussive techniques that honor tradition while seeking innovation, resulting in a unique approach to the genre.  Domingo is one of the most influential artists of contemporary flamenco dance, and a technically astonishing dancer and choreographer. 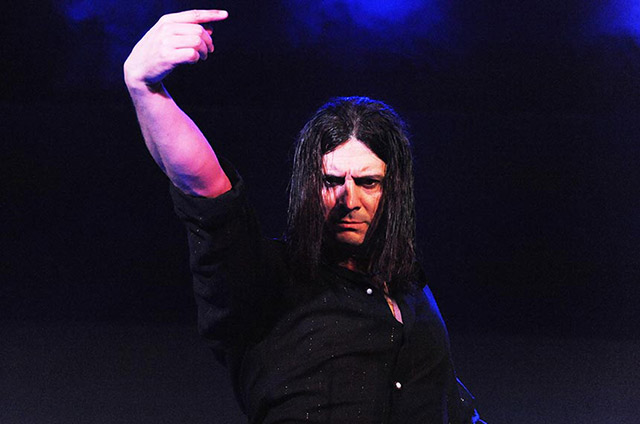 Also hailing from Jerez, virtuoso guitarist Ramón Trujillo will transport audiences to the heart of Spain with his truly genuine flamenco sound. This performance marks the U.S. Debut of Trujillo who is virtually unknown outside Jerez despite being the winner of the Young Guitarists Award of the 1990 Biennial in Sevilla, as well as the annual guitar competition organized in Jerez by the peña Los Cernícalos. Ramón has been featured on numerous recordings with important artists such as La Macanita, Potito, Niña Pastori as well as Camarón de la Isla. Trujillo will be joined by the passionate playing of Kyoto-born guitarist José Tanaka who has been composing and performing since the age of 16.

Born to one of the oldest gypsy families in Sevilla, power-house singer Jesús Montoya is one of the most sought-after flamenco singers in the U.S.  Jesús will be joined by Madrid-born flamenco singer Sonia Berbel, a cantaora of immense rhythmic style and sensitivity.

The highly anticipated performances of Santa Barbara siblings Ryan and Daniela Zermeño will delight audiences with their intensity and precision, and features first time ever duets for the two choreographed by Mr. Ortega.

This performance will coincide with several workshops and private classes as well as a Master Class on Sunday, March 22 taught by Domingo Ortega and offered at the Zermeno Dance Academy in Goleta. For further information contact: danny@zermenodance.com

This performance is being presented by Vida Flamenca Productions. Our goal, 15 years ago began with a small group of international artists with a focus of cultural exchange, fostering the next generation of Spanish dance artists. Now as a California-based 501 (c) 3 non-profit, we are dedicated to advancing and preserving Spanish dance and music traditions. Ongoing programs increase awareness of Spanish culture through educational workshops, and performances.

We are honored to be presenting this premiere performance at the newly renovated La Cumbre Theatre in Santa Barbara as part of a” benefit for La Cumbre Cares.” 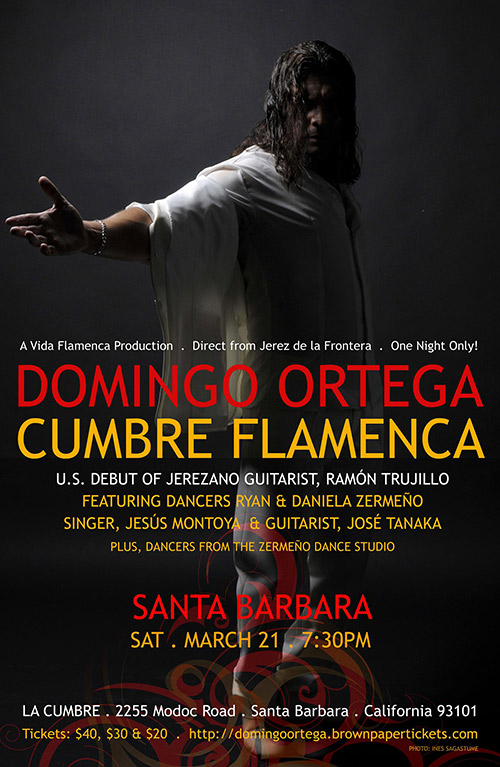