Rafael Riqueni: «There's no sadness in my guitar… there's life»

The guitar genius returns to the stage after an absence of many years with «Parque de María Luisa», a much-awaited album that evokes the feelings hidden in this Eden of Seville.

Lately, in flamenco circles, two names are continually popping up.  One is Rosalía, and the other, Rafael Riqueni.  Both are much in demand for interviews, although they are separated by an abyss.  One is a young singer who, in her debut at the age of 23, was received as “the Patti Smith of flamenco”, and appeared on the covers of magazines and periodicals that had never touched upon flamenco, but who now feature triumphal headlines in the genre starting from zero.

The other is a 55-year-old guitarist, holder of the Premio Andalucía de Cultura, Premio Nacional de la Crítica and Giraldillo for Maestría in the 18th Bienal de Flamenco among other awards, composer of some of the most important works in the history of this art-form and who just released Parque de María Luisa, his seventh recorded work after an absence of 21 years.  A living maestro whose interest stems from a lively professional career that would be enough to write a tract on the link between flamenco, emotions and time.

One of them, is set to embark on a neverending tour.  Riqueni, after having served his prison sentence, returned to performing a few days ago in Suma Flamenca, now talks about his upcoming performance on August 25th at Flamenco on Fire in Pamplona as if it were tomorrow.  “I’m not strong yet, and I want to go easy on concerts in order to be in good form.  A concert of two and a half hours as what I did the other day, leaves you exhausted, and now I need to rest and enjoy life” he says.

Among flamenco followers, the debate surrounding the first one is centered on whether the output is worthy of so much attention.  Regarding the second one, there’s no controversy.  He is mentioned in relation to his health, or when the next concert is programmed…no media fuss.  Among other things, the bipolar disorder that kept him from performing for years, and the jail time, the artist speaks openly.  However, here we asked him about other things…

-Are you returning to the stage with enthusiasm?

-Lots of enthusiasm.  In recent years I’ve been able to do the occasional concert during brief leaves I was granted, such as at the Teatro Maestranza where I presented this record, but to be able to tour after such a long time is very exciting.  Especially with a group of ten musicians as I have now.  I’m very pleased.

-Do you in any way feel there is renewed enthusiasm surrounding you?

-It’s a different moment.  Now I’m older, the years pile up…and I realize that having been in prison, and coming back with a new record after 21 years makes it all more newsworthy.  It’s true I’ve always had my followers, but now it feels like there are more, and for an artist, that’s very good.  It’s fantastic.

“Madrid has been a very important school for me, both professionally and personally. There was tremendous interest in guitar, and also competition because the guitar is a very competitive instrument”

-Parque de María Luisa is an album inspired in the famous Seville park that sounds like nostalgia.  How much of you is there in these corners?

-Precisely what I’ve done as an inhabitant of Seville, is transfer my experiences and memories of the park to my imagination, and from that starting point, give a title to each place, to each song…and give form to the work.  For these pieces I’ve tried to find the sound of a bird or of the water with the guitar.  To think what the lotus pond suggests, if it feels like soleá or something else. It’s all about feeling what the guitar suggests, and then building upon that with musical technique.  It’s been a very gratifying labor of love in which I’ve asked myself what that past means to me.

-Are these memories which, as a Seville native, you can share with the rest of the world?

-Of course, the response from Madrid for example has been very positive.  I had my doubts, because it’s true that Seville makes a lot of sense, but I didn’t know if it would be equally understood in Madrid.  Nevertheless, it has been well-received because these really are songs that evoke a specific place, but which reflect universal emotions and feelings.

-In his book El Jardín del Flamenco, Juan Verdú says that at Madrid’s Candela bar, “each table had its level, and those of Morente and Paco were the select places for flamencos”.  What did you learn during those years in the capitol?

-It was a very important school.  When I got to Madrid, there was an amazing guitar movement.  Lots of young guys who were virtuosos.  On a single night in Candela, you might see 20 or 30 guitarists playing together.  There was tremendous interest in guitar, and there was also competition, because the guitar is a very competitive instrument.  A few of us began to stand out there, and this was helpful for me since I began to receive calls from many places.  We had a really great time.  Some days Enrique would show up, or Habichuela, or maestro Paco, and it was sheer heaven.  Those experiences contributed a lot, both musically and personally.  Right now, it’s impossible not to feel a certain sadness.  Paco’s death hurts more with each passing day.  I play the guitar and think of him a lot, because he was also a very good friend, and as far as Enrique, what can I say.  He was so charming, things just aren’t the same without him.

“The most important thing, and the most difficult for a guitarist, is to be identified by your sound.  That, and having a style, an idea of your own”.

-Would you say joy or suffering is more helpful when you compose?

-Flamenco isn’t exactly a non-stop bulerías party.  It’s tragic music, hard, painful, and many of my pieces can be sad, hard and nostalgic, but that doesn’t mean everything was composed out of sadness.  I don’t see sadness in my music, I see depth, and yes, I see flamenco, I see life itself.

-What has the guitar taught you?

-I’ve learned that I have to place my fingers correctly again, that you have to study slowly and put the hand in order.  The guitar has taught me that it’s endless, that there is no finishing point, that there is always something to discover.  It’s wonderful, and you never get bored.  The best thing that’s happened to me in life is being a guitarist, and if I were to be born again, I wouldn’t be anything else.

-In addition to playing, do you find time to listen to music?

-I’ve always listened to all types of music.  I love jazz, classical music…and in flamenco, more than anything else, I listen to cante.  This morning I was listening to the Procesión del Rocío of Joaquín Turina, which is fantastic.  In any case, I don’t listen by listening, but by studying, because I’m always analyzing, measuring…wondering why something or other was done.  I live it very vividly.

-And now, what’s the most difficult thing to find in guitar?

-The guitar is going through an extraordinary moment.  The most important thing is to have a sound of your own, that you be identified by your sound, that everyone knows who’s playing.  And from that point on, to have a style, that what’s sounding is your own idea, a reflection of your personality, be it Parque de María Luisa or Fuente y Caudal, the valuable thing is to have your own sound and personality.

“During this time, I’ve learned that I have to get my fingers in place again, you have to study slowly and get the hand right.  The guitar is endless, there’s always something new to discover”.

-Your most immediate wish?

-To continue with the tour, to rest and enjoy life… And have time to dream up guitar variations and music for the next record that I plan to record in 2018, and I’m already dying to get started. 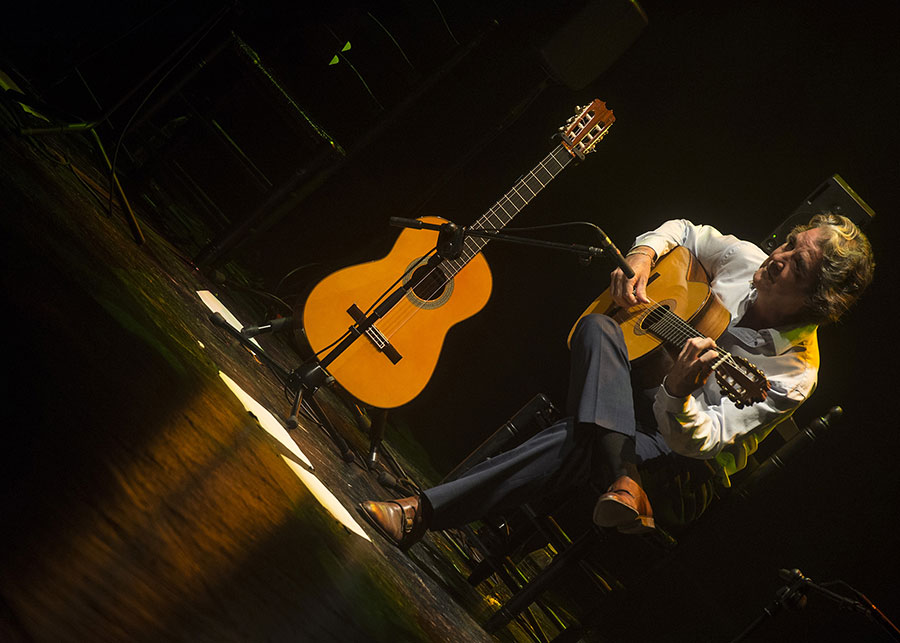 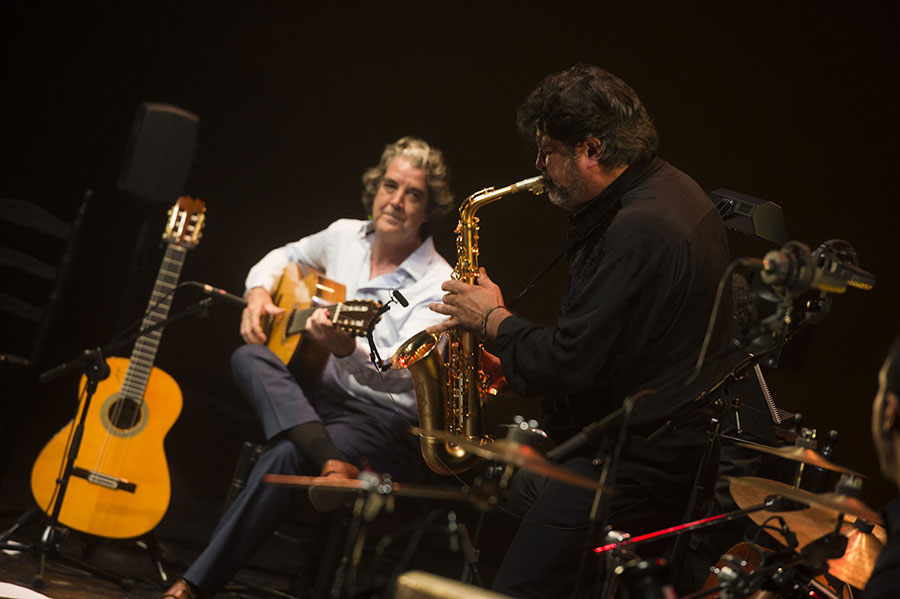 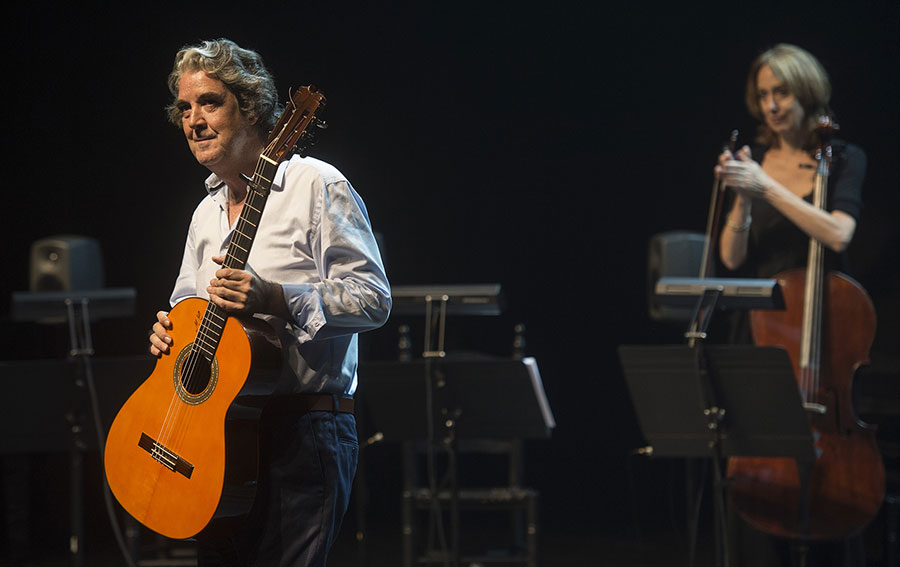 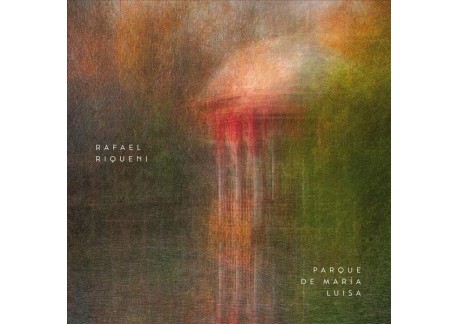