His music is as intuitive as he is, fresh, expressive, rich and honest. “A clear vision between the sea and the river” as described by José Luis Ortiz Nuevo in “Bajo de Guía”, the recording debut as soloist after having collaborated with the biggest flamenco stars, and having surprised the Seville audience with works such as “Divino Tesoro” and “Quién me Presta una Escalera”, directed by the writer and flamencologist.

Diego Villegas, a product of tablaos, now brings his wind instruments to this picturesque seaside neighborhood of Sanlúcar de Barrameda, his hometown, with sounds of tanguillo, soleá, bulerías, tangos, rumbas and mirabrás.

And furthermore, this year he debuts at the Bienal de Sevilla on Tuesday, September 13th, with the bad luck that it's the same day as Jorge Pardo, one of his most admired musicians, and on whose recording he collaborated, but with the good news that he has a lot to say.  If you think there are instruments not made for flamenco, listen to Villegas, who sings, dances and does palmas. 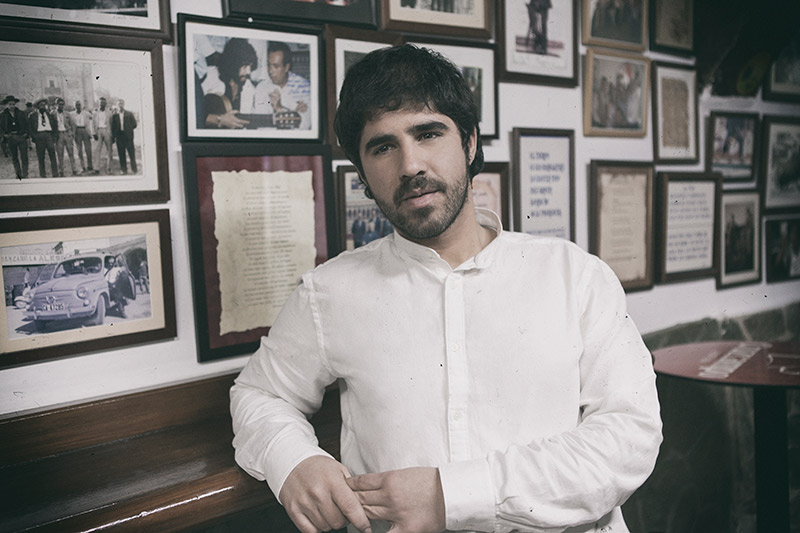 -'You are what you breathe' writes Javier Ruibal, and without a dount, Sanlúcar oozes from his pores…

-People who know the town say so.  Friends who live outside have said the same thing, that they close their eyes and see Sanlúcar…  I suppose it couldn't be any other way, because I was raised in an atmosphere of fishermen and I really took in all Sanlúcar.

-How has it been received in your town?

-Just great. Lots of people in Sanlúcar hadn't heard an instrumental record before, and they say they love it.  My mother's friends that she has breakfast with at El Pinocho bought the record because I was “the son of Cari la Pescaílla”, and now they say they have it on in the car.  It's very gratifying because I did what I wanted to do, but it's true it sounds dynamic and goes down well.

-What do you miss most of Sanlúcar?

-The things I miss most are the naturalness and the closeness of the people, the affection.  We Andalusian people are often accused of being hypocrites for expressing friendship that may not be real.  But I think that has its positive side, because it shows that we just want to feel at ease.

-Lots of people wonder how you get flamenco from a sax, a flute or a harmonica…

-At the age of 8, I entered the conservatory to study guitar. The thing is, there was a band in town, Julián Cerdán's, they had a music school and offered grants where I studied.  I convinced my mother to let me go, and when they asked me what instrument I wanted to play, I said the clarinet, because that's what my best friend at the school played.  In the end, I got the grant, and two months after beginning they put me in the band, so I never had to pay the registration fee.

-Oh, yeah…  When I was 15, my sister, who is a flamenco dancer, opened a tablao.  At that time I had no interest in flamenco.  I'd gone a few times to see her dance, and I fell asleep, I was just a kid.  But since I played the clarinet, I got myself together and went, and got interested in playing my own stuff, with no written music.  I also began to listen to jazz, I formed a little group with friends and saved up to buy a tenor sax that I played on my own.  Then, the flute, the soprano sax, and at 18 I bought myself a harmonica. 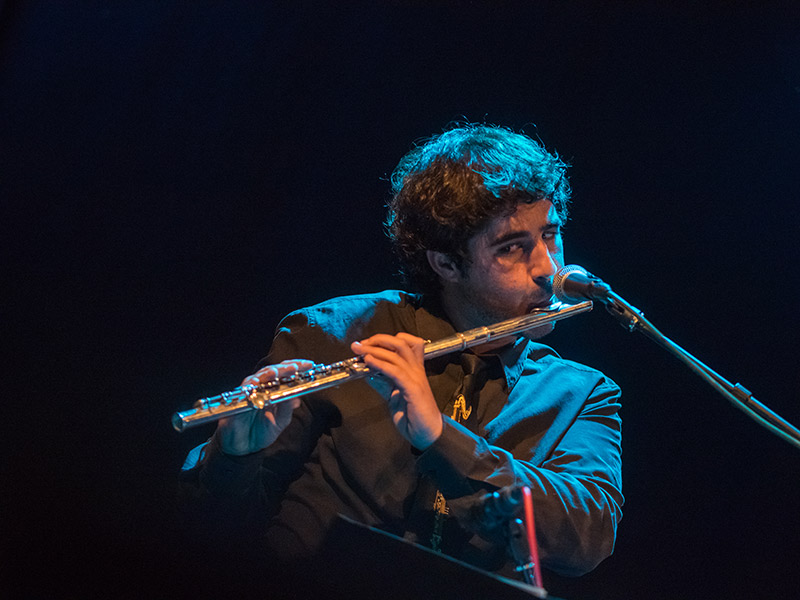 Absolutely. No shame whatsoever.  No sooner would I play something on the instrument, I'd be up at the tablao doing it.  Perhaps the odd thing is that I never studied the instruments, and then I played flamenco, studying them on stage.  This probably didn't give me real technique, but I need this to express who I am.  My education at the tablao made me find ways to play what I wanted to play.

“In order to play flamenco, you have to feel those twelve beats so you can move through them and look for the shading.”

-Is that how you got the feel?

-It's possible the difference between myself and other wind instrumentalists who play flamenco is that they were first formed in classical music or jazz.  The best thing that could have happened to me was to play at the tablao, because flamenco is rhythm, and rhythm has to get into your head, your balls and your heart.  You have to feel those twelve beats so you can move through them and look for the shading. That's what I learned there.

-Because, what does flamenco demand of a wind instrumentalist?

-First of all, that you be flamenco and feel it as much as a guitarist, singer or dancer.  Secondly, instruments are made so as to sound perfect, and in flamenco you have to look for the rough edges.  In fact, the techniques I seek aren't natural, they dirty the sound, but they get the job done to create the effect I want, like a singer's lament.  It's important for me to achieve that effect.  I don't want to sound like a non-gypsy.  I once played for Remedios Amaya, and she said: “kid, I don't go for those flutey things, but you sound very flamenco”.  After that I played for her many times. 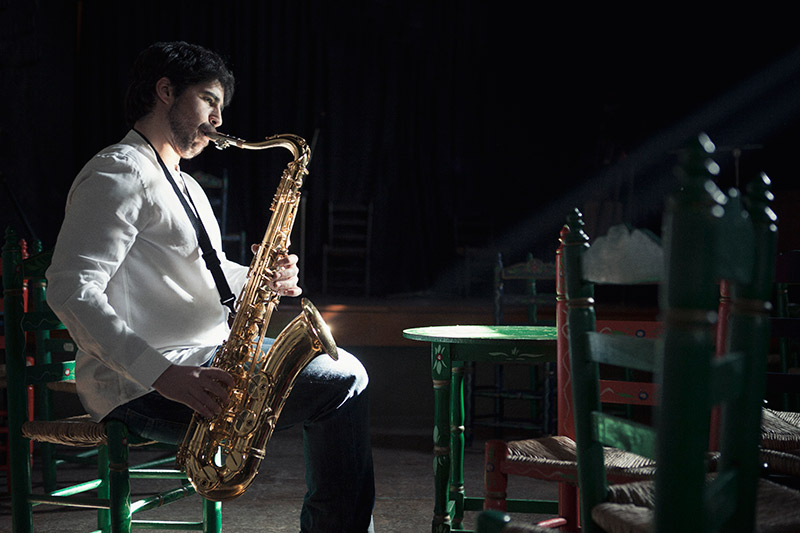 “It took a year and a half to make the record, because there are 40 artists, and each one gave his best”

-And did the flamencos give you your place from the start?

-Luckily, I worked with a lot of people and I was able to put a lot of myself because, among other things, they didn't know how to tell me what to do.  Their not knowing the instruments I play, made it easy for me to do what I wanted.  I had to make a big effort to be creative and give something to what was going on.

-Now many of them collaborate on your record.

-Yes, from the very beginning I knew that I wanted to make a record to get ahead, not just a throw-away. It's not backed up by Warner, but it has nothing to be ashamed of in quality.  So I fought to make it sound good.  First, I got in touch with the guitarists I thought had the most to say in each of the pieces.  It couldn't have been any others.  The mirabrás of Manuel Valencia, the tanguillo of Pedro Pimentel, Paco Vidal in that tango that is like weeping…  And the voices, the same thing, it's all very logical.  That's why it took a year and a half to make the record, because there are 40 artists, and each one gave his best.

-Do you notice that there are more and more instruments in flamenco all the time?

-Yes, because people aren't stupid.  You go to a show of guitar, singing and dance, and it's wonderful.  But if you add good musicians, there's more color.  And all the more so when you bring flamenco to the theater and have to tell a story. 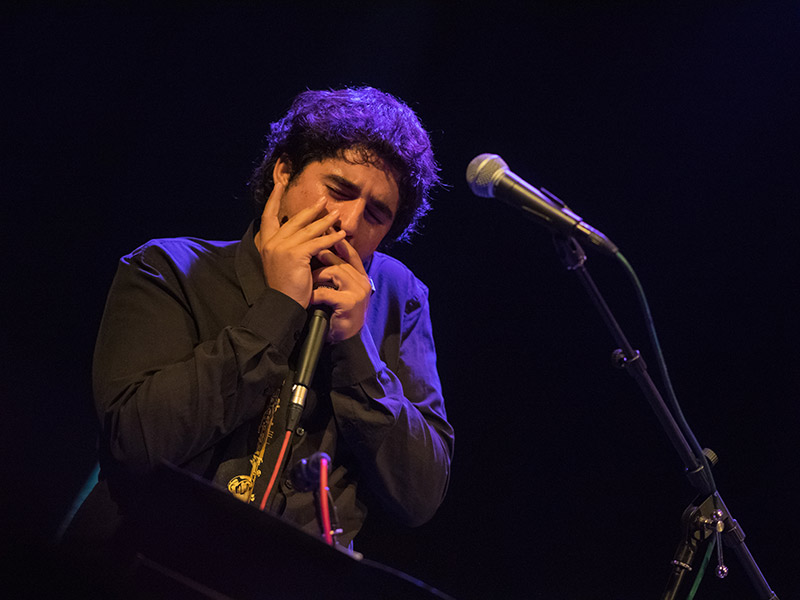 “I don't know what this flamenco shit has, but it's addictive”

-And what have you found in flamenco that you don't find in other kinds of music?

-I asked myself that question when I was in Madrid at a concert of classical music, and another of jazz, and another of flamenco.  In the first two, I had goosebumps twice, in the flamenco one, I ended up excited.  I don't know what this flamenco shit has, but it's addictive.  For example, I listen to Enrique Morente, and my soul feels like it's going to burst.  That man has something that just gets me.

-Can you imagine living from some other source?

-To tell the truth, if instead of flamenco I'd played something else, I wouldn't be able to live from what I do.  In the end, my instruments stir a kind of fascination with the unknown, and that's helped me.  Anyhow, I don't want to be famous, I like life more than my profession.  What I want is that people be able to hear what I do, which, in the end, is an artist's motivation.  And if you like the record, they tell me the live performance is even better. 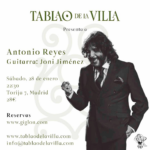 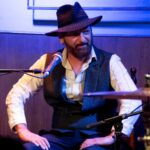