Ogalla and Peña, elegance as an identity

David Coria directed the new show of these Cádiz dancers who gave a classic recital, precise and stylized, that was much-applauded by the Jerez audience.

It can surely be said that metaflamenco is a global tendency in flamenco.  Reflecting on what one does, in addition to doing it and letting the audience see the backstage workings, is something we’ve seen in many recent shows.  La Tournée of Pilar Ogalla and Andrés Peña, opened in the Festival de Jerez with this premise: that of explaining what rehearsals for a tour are like, and how the artists get along in those sessions and travels in which they spend more time with colleagues than in their own homes.

Another tendency is that all the interpreters do everything, as happened last night in the show ¿Qué Pasaría si Pasara? and was repeated in La Tournée, where Ogalla, Peña and percussionist Roberto Jaén sang a little, and the singers Inma Rivero, Emilio Florido and Miguel Rosendo had their dance moments as well.

The group, musically directed by the guitar of the impeccable Rafael Rodríguez, began with tangos de Triana, and with the dance couple in high gear.  Ogalla is elegant even when she sweats, and the ease with which she moves around the stage looks natural because she’s the one doing it.  She danced a solo of taranto, and despite the piece being a bit long, it was perfectly clean and well-executed.  The intensity comes from Ogalla, starting from the head: she’s not afraid to pick up the speed of the footwork and legs as much as needed, but reserves her head movements, and this is smart because its beautiful and effective, and if she generates expectations, it’s because she doesn’t abuse the technique.

In the imaginary tour, the couple falls in love, and the duet they share is one of the most beautiful pieces of the work.  It is also sensual – seldom do you see such a subtle yet carnal representation as these two present.  It seems in today’s flamenco everything must be fast, and there’s no time to look at one another, nor to brush against the skin, which is why it’s unusual to see a couple allowing time to approach one another as Pilar and Andrés do, so honestly and with such feeling.  The audience got the idea, and cheered the caresses and furtive glances.

The last work Ogalla and Peña presented in Jerez and toured Spain with, De Sepia y Oro, was a great success, and after last night, it looks like it’ll be the same with La Tournée. They know each other well, and it showed in the perfect coordination of the abandolaos.  Peña was outstanding in the soleá, demonstrating it’s possible to dance powerfully without being a karate master.  He achieved this showing a rich repertoire of movements that he used in just the right amount, and it was wonderful to see how his energy grew as the dance went on.

David Coria directed the show, and this was apparent in several important aspects.  One, was the idea of showing the innards of the work and the company, highlighted among other things, in beginning the representation before time.  The spectators were filing into the theater as the actors on stage were living out reality more than acting.

It also showed in the division the show into scenes, and in the importance of the ensemble work which also was evident in his first solo work, El Encuentro, presented last year in this same festival.  It’s not a trifling matter, because it conditions the staging, which is why the main figures are never alone, there are always others to provide warmth, music and voice.  The best thing is that telling the story they have to tell, that choice makes sense because there’s a sort of inside joviality that only flourishes in the group, and possibly far from home.  It’s that need for the other part, the laughter and the contact you find at a summer camp, on a trip with friends or as in this case, a tour of performers.

The lighting helped create shadows that filled the very long and deep stage; when the curtains were removed the space appeared twice as big.  The height was also taken advantage of.  For example, when Ogalla and Peña danced on some chairs, and upon moving upwards, they managed to created a perfect combination from the viewer’s standpoint, a picture with volume and harmony.  The alegrias at the end was delightful, with both dancers paying tribute to their province, leaving no doubt that discipline and elegance are their stock in trade, and putting an ending to a work that was much applauded by the audience at the Villamarta Theater. 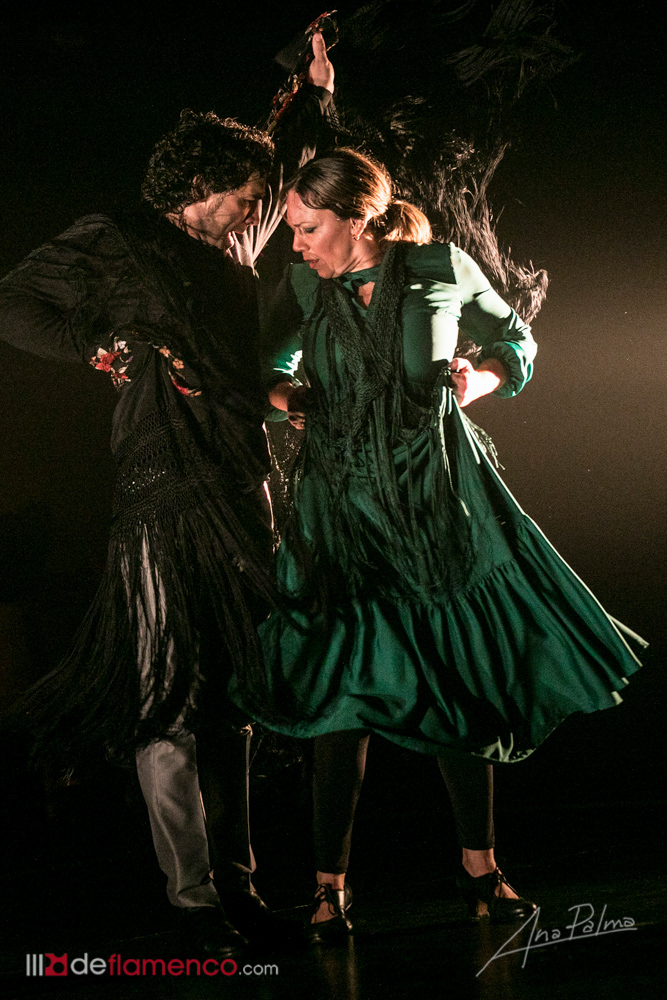