With the title “El Atlante” this is the guitarist?s third recording

Music of other spheres

“This is neither a conventional flamenco guitar record, nor can its interpreter be strictly defined as a flamenco guitarist.  Flamenco is present, yes, but in a different dimension, because Juan Antonio Suárez ‘Cano’ doesn’t only compose music: he suggests ideas and builds images from a position of unique sensitivity.  Flamenco is his expressive raw material: rondeña, taranto, bulería…  But we shouldn’t just look at the illusion, the mere sleight of hand.  Those musical structures, that sequence of measurable hertz transports us to intangible universes that go beyond the sentimental flamenco facts at hand.  The beauty of his music situates us at the limits of known flamenco.  As he thinks, thus does he create.  As he believes, thus does he express.  Cano is a builder of concepts, a conscience mover who lays out a journey to the center of the earth and to the far reaches of the universe, with his guitar being the sole instrument.  Cano works a type of polysemic flamenco that insinuates unexplored dimensions of the emotions.  ‘El Atlante’ is the audio visualization of a lost culture, of a dormant memory buried by the sands of time and science.  A legend Cano conjures up with his guitar, with his exquisite musical personality and with his coherence: coherence between his world, the real world and the universe” 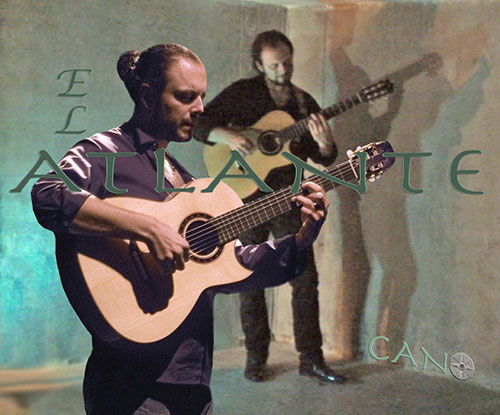 Listen to sample clips and download the album or separate pieces: