José Valencia: “It's annoying when people decide what kind of singer you are, and what you must and must not do”

The Lebrija singer will be at Madrid's Sala García Lorca on Saturday, December 16th, along with guitarist Manuel Parrilla to offer “the kind of recital that keeps the classic contemporary flamenco flame burning”.

He’s been singing his whole life, on stages big and small, in all the cities of the world, yet he speaks like someone just starting out.  Not out of false modesty or insecurity, nor anything similar, but rather because José Valencia has lived and seen enough to understand that performing artists only survive if they have their feet firmly planted on the ground, knowing how to sacrifice or reinvent themselves, whatever…

So he uses the word “struggle” to describe the path he decided to follow on his own a few years ago, taking advantage of the backing provided by his Giraldillo al Cante prize in the 2012 Bienal, the critical and popular success received for his recording “Directo” and projects such as the tribute to Juan Peña El Lebrijano, for which he also received the Giraldillo al Momento Mágico in the last Bienal.  And each day he strives for the heights because he has a name of his own.  Being known as “just a singer for dance” is an injustice that hurts him, although he’s learning to conceal it. 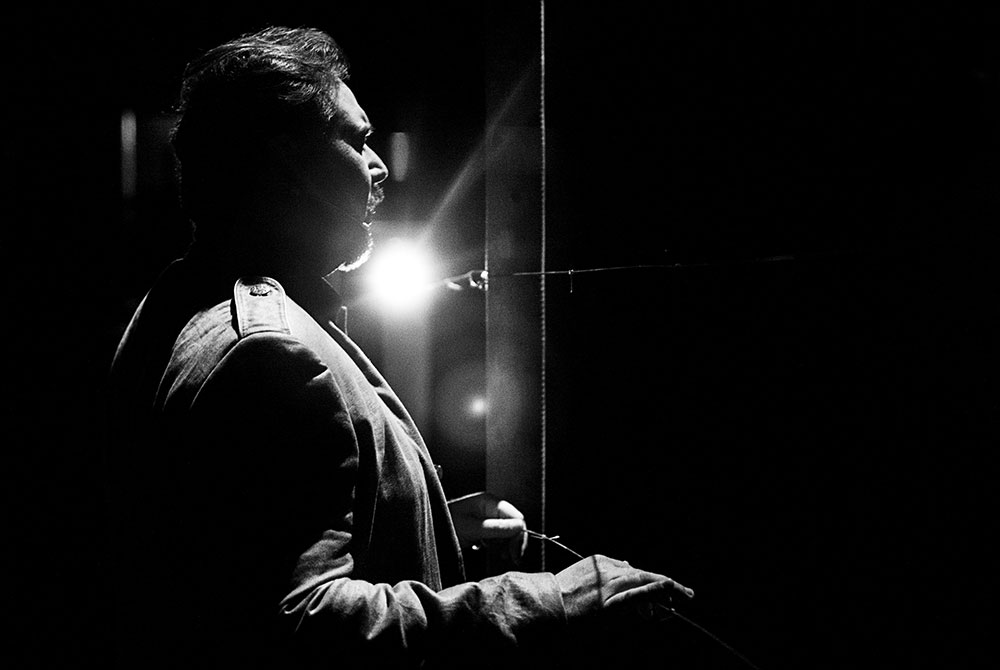 – This Saturday you have a date at Madrid’s Sala García Lorca, how do you get these gigs?

– It’s where I come from, and what I’ve been doing all my life.  I’m as I was at the beginning, singing alone once again and becoming known as José Valencia.  What’s more, although I consider myself more of an artist than a flamenco singer, because I like to propose shows that allow me to go beyond just sitting in a chair and singing, I feel I have the obligation and the right to continue offering these recitals that keep the flame of classic contemporary flamenco alive.

-Would you say being versatile is an advantage for an artist, or is it more rewarding to be labeled?

-That’s up to the critics and the general public to say, but I think a singer of the 21st century has to strive for something more.  There exists a concept of the flamenco singer as something static, when the ear and the eye can receive a wide variety of emotions.  I think an artist must be concerned with that, and be as complete as possible.  It’s beneficial for all concerned.

– How precarious is the performing world?

– It’s complicated because we live from what we do, there’s no salary at the end of the month, so you have to be constantly creating and searching for opportunities.  Also, today you’re in one place, no one remembers you, and there are many people lining up behind you.  We always talk about the nice part, but there’s another world you never see.  It’s very complicated, and all the more so when politicians think of culture as entertainment, something unimportant, not a social or educational necessity.  But art exerts an influence, which in itself makes it important.

-In this sense, you’ve been over a year without singing for dance…

-Exactly.  It’s like starting all over again.  Leaving behind what you had, and betting on yourself once again, needless to say with knowledge and the backdrop of an entire career.  In flamenco it’s very difficult to shake certain labels, and if you’re considered a “singer for dance” – which is a thoroughly unfortunate label because you’re a singer, period – it seems you can’t move away from that.  It’s become the norm, that anyone who wants to have a career as solo singer has to stop singing for dance.  Without a doubt, it’s a hard and scary decision, but you have to face up to that to achieve your objective.  The important thing is to keep moving forward and do things, more or less viable, in which your personal mark shows.

“I feel more like an artist than a flamenco singer, because I like to propose shows that go beyond just sitting in a chair and singing”

-I remember once when you were leaving a concert, a flamenco fan admiringly said you were the greatest one of all, and you quickly stopped him…is a person never that great or that bad?

-An artist has to be allowed to flow, you can’t praise or destroy so quickly.  We have to make mistakes to see the best of ourselves, and also to be able to see the worst.  I also think it’s not good to put someone on a pedestal for having done a first thing very well, you have to see the evolution.  We go very quickly in everything, and first we ought to know what is the flamenco concept we want to defend.  I don’t know if we want to sell a contemporary classic, or offer the most avant-garde thing, nor what the norms are for constructing all that.  We have to look at what’s being done, whether we’re looking for personality or trying to imitate something.  Right now there’s a lot of confusion and we’re a bit lost.

-In your opinion what’s the first lie you hear about flamenco?

-The first lie, and which I do not tolerate, is when people say that flamenco is partying and drunkenness, something associated with the life-style of Andalusia.  Flamenco is something else, and that concept shouldn’t continue to circulate.

“The first lie, and which I do not tolerate, is when people say that flamenco is partying and drunkenness”.

-We know it was especially hard for you to continue with the project “De Sevilla a Cádiz” after the death of El Lebrijano?  What was the most difficult thing?

The hardest thing was Juan’s death.  To have a singer like that by your side, and then he’s gone…  I didn’t know how to tackle the project in order to respect his original idea.  For that reason I turned to the person most in contact with him, personally and professionally, his nephew Pedro María Peña, and from that starting point we decided to make it a tribute, and show the philosophy he left in this first work.  Everything was very easy with Pedro because we shared a similar perspective on art in general.  I’ve always been in love with my town, its singers and above all, that blond gypsy.

-What legacy has he left you?

-Juan is one of the best flamenco singers of the second half of the twentieth century, and a pioneer in many ways.  After sharing so many conversations with him, you’re left with many ideas and many paths to follow.  His discography is worthy of study.  A different sort of singer with a genuine personality, the starting point that communicated everything from that wonderful generation of la Niña de los Peines and Tomás Pavón, up until the present.  I was fortunate enough to have talked a great deal with him, and that personal experience is what I have left, because I was there.  He has left me an enormous legacy that I am going to keep defending, studying and learning from.

-Why does the current generation continue to insist on learning from the maestros?

-It depends on each one’s objectives.  It’s true we’re in an era more given to imitation then re-creation, and it’s possible we might be bogged down in that way.  I see we don’t question anything, I don’t know if it’s a lack of interest, or because we believe that everything exists in the wonderful world of Internet.  But Internet flamenco isn’t going to give us the answer, what it can do is lead to more confusion.  Youtube has become a way of learning, it’s actually a way of spreading information, and there are still many people alive who know a great deal.  That’s what I was saying about Juan, it wasn’t what you heard him sing, it was what he explained to you.  But of course, it depends on whether we want to be good artists, or celebrities who make a lot of money.  There’s a very big difference.

-What are you working on these days?

-Well, this year is ending with many projects for the coming one.  I’m very interested in looking at what my race is doing in other countries, and showing the cultural intellectual facet of gypsies, which is also very interesting, and people ought to know about.  I’ve also got some things in mind about classic flamenco, and I don’t rule out doing some theater.  We’ll see.  What I’m concentrating on is myself, José Valencia.  Then we’ll see which way the wind blows.

-After so many years singing, what’s the hardest thing to conserve?

-With time, a person calms down somewhat, learning to take things differently.  You don’t get angry so often, and you’re more selective about what you want to do.  What I don’t like is when people decide what kind of singer you are, and what you have to do or not do.  I’d never ask an artist to do anything that wasn’t right for him or her.  In flamenco it seems like you have to side with one group or another.  It reaches a point that so much labeling is a pain because you don’t know if it’s flamenco, if it’s now or new or whatever…and this has only one name.  Flamenco interpreters are already argumentative enough that we don’t need followers of the art also to be in a state of confusion.  That’s why what I try to do is give my best, and give thanks to God for being able to make a living doing what I like.

-What’s missing in flamenco according to José Valencia?

-What I do miss is relationships with people.  I believe an artist needs to be surrounded by interesting people in order to become enriched.  It used to be, without so much technology, there was more contact. 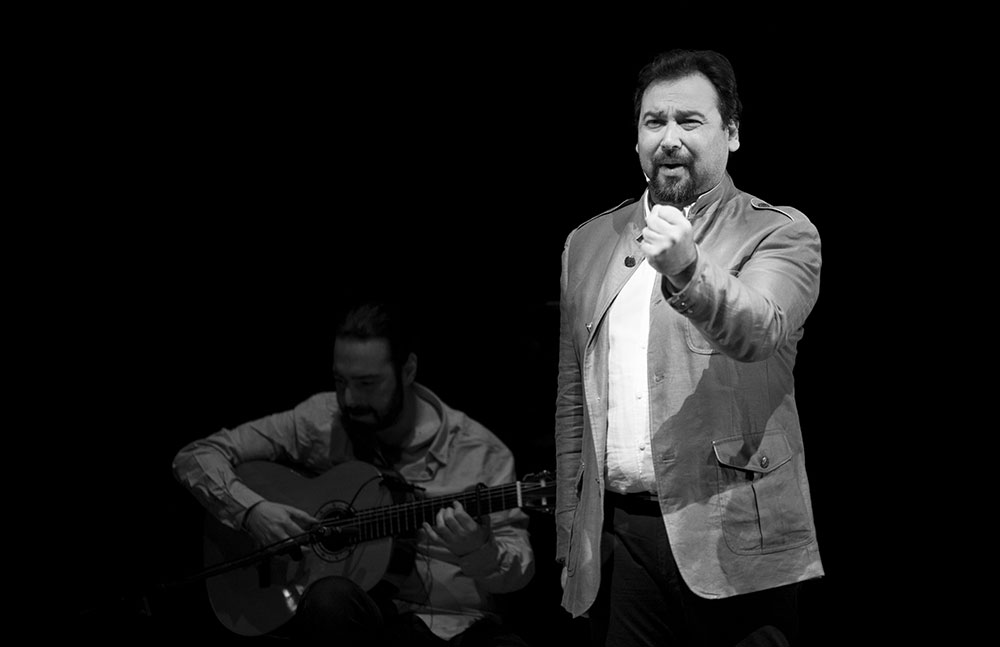 Aurora Vargas and Pansequito. An invitation to life