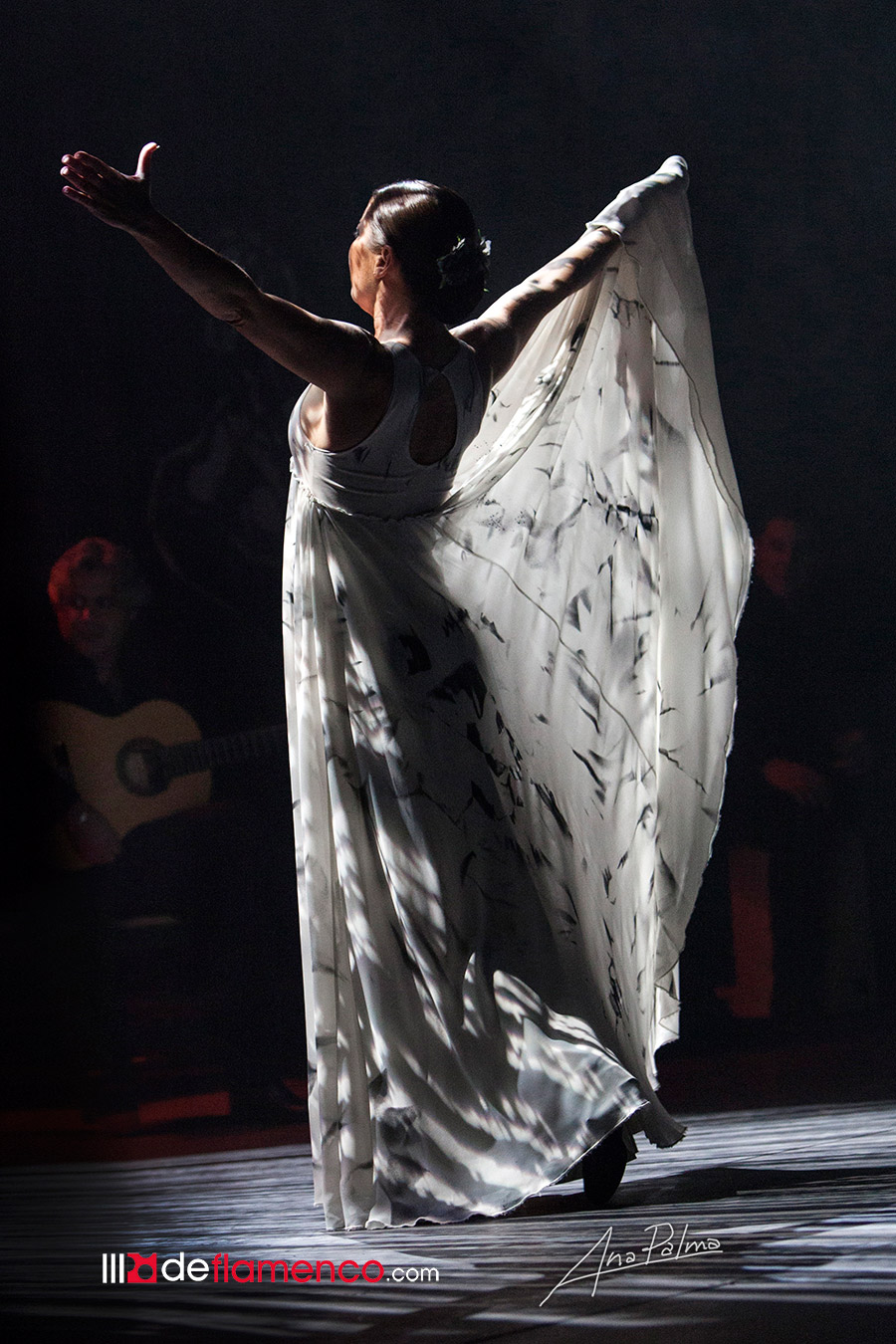 Maybe it's the sparkle in her eyes, or the little kisses she sends out to the grateful audience like missiles, or perhaps it's the flowing fabric she makes fly and fly, or maybe she's just a magnificent dancer who learned years ago how to give a general audience what they want most of all: a kind of popular domesticated flamenco, without complications or lofty concepts.

On this occasion the chosen vehicle was her work “Voces”, Sara Baras' sincere personal tribute to flamenco artists she considers important references.  Not necessarily the most relevant of the entire history of flamenco, but rather those people who left their mark on the Cádiz dancer, and contributed to forming her artistic personality.

Nor are all the “voices” (voces) singers.  The selection includes two guitarists, Paco de Lucia and Moraito, two dancers, Carmen Amaya and Antonio Gades, and two singers, Camarón de la Isla and Enrique Morente; a selection of six central figures who jointly represent the last half-century of the flamenco genre.

As in all Sara Baras' shows, no detail is unattended.  Beginning with a team of singers made up of Rubio de Pruna, Miguel Rosendo and young Israel Fernández, three voices who deliver the most contemporary singing with a taste of the past.  Keko Baldomero's music is equally fresh, without losing the flamenco aroma.  The corps de ballet is top of the line, the lighting is tasteful and even the percussion is noteworthy and original.

Eleven scenes grouped according to the honored figures, includes their off-stage recorded voices…Paco de Lucía saying you have to perfect your technique in order to forget about it and be able to interpret freely, and Camarón asserts “there are only two schools of cante: you either communicate or you don't”.

Admirably, there was no attempt to imitate creations of the honored artists, but rather to evoke them through a contemporary prism.  The dancer interpreted a farruca that reminds us of Antonio Gades in the film “Los Tarantos”, and melody lines from Bizet's “Carmen” create the mood for that piece.

The repertoire is ample and varied, and includes seguiriyas danced by Sara and José Serrano, a taranta danced by Sara, updated tangos de Granada to recall Morente, the soleá of José Serrano, soleá por bulería that we inevitably relate to Jerez and Moraíto and bulerías in honor of Carmen Amaya who is conjured up in an instant with a short jacket with pompoms worn by Sara.

More than two hours of up-beat stylized flamenco, digested by Sara Baras and served without hang-ups.   At the end, the dancer had affectionate words for Manuel Morao, patriarch of the family of the same name, who was present in the audience, and in whose company she participated as a young girl.