The Festival de Cante Grande Fosforito in the city of Puente Genil (Córdoba) has reached its fiftieth anniversary.  Throughout the year, there have been numerous related events, as well as tributes to the maestro of flamenco singing who has been a reference for generations of flamenco fans and singers: Antonio Fernández Díaz “Fosforito”.

This is one of the oldest summer festivals, and it maintains the essence of them in that there are portable drink coolers, whole families attend, local flamenco fans as well as people from outside who all come together August 14th to share talks and informal bar gatherings, and to enjoy the performances of the big stars.

Surprisingly, the patio of the school where the event is held, received up to one thousand six-hundred people.  No festival in Andalusia manages to draw such a big crowd.  There are many flamenco followers in Puente.

Fosforito was the master of ceremonies, although he remained among the audience until the event wound up around 5 in the morning.

There were institutional acts, and words from the mayor Esteban Morales, who presented Fosforito with a commemorative plaque.

After the official acts, the presentation by Juan Ortega opened the door to the singing of local artist David Pino.  Guitar teacher, investigator and expert in the ins and outs of flamenco, shined brightly in a night of highs and lows.  With the guitars of Gabriel Expósito and José Tomás, and the palmas of Ricardo Gutiérrez and Clara Gutiérrez, he began with malagueñas of Chacón, ending with serrana and verdial.  One of his virtues is in knowing how to choose musical variations that depart from the dogmatism that sometimes affects singing.  Because the freshness of serrana introduced between Málaga forms is not customary.  Alegrías, siguiriyas de Jerez with the closing of Manuel Molina, and a variety of tangos rounded out a recital that, without a doubt, was the best thing of the entire night.  Perhaps, since he opened the festival, expectations were lower, but we remembered his fine performance later in the night. 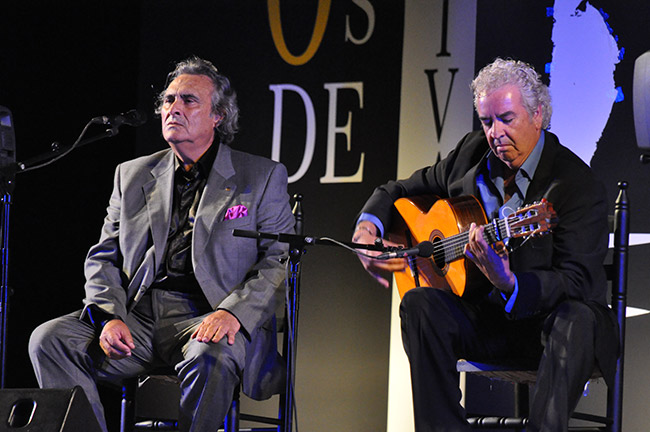 Seville singer José de la Tomasa, with Paco Cortés, took over from Pino.  Tomasa, in full artistic maturity, struggled with his throat and the wind to give his best.  His hoarse voice was a problem from the taranto with which he began, to the siguiriya.  He fought to show what he knew and what he's given to flamenco singing.  Paco Cortés, a fine guitarist, had to maneuver the tide of long verses in the set of soleares the singer interpreted.  In fandangos he sang styles of el Sevillano, Juan de Camas and Manuel Torre.  In his last cante, siguiriyas, and nearly out of time, since the instructions were four forms per interpreter, he appealed to the spirits and put all his cards on the table.

Around mignight, Carmen Linares, the grande dame of flamenco singing, was to be the night's high point.  And so it was in the first part of the festival.  It's always a pleasure to hear her, because in her voice and her singing you can find a good part of the history of flamenco of the last fifty years.  The sweetness, at the same time knowledge with which she takes on the forms, along with Salvador Gutiérrez on guitar, are admirable, from the mirabrás, cantiñas and alegrías, up to the soleá, taranta and cartagenera and the fandangos de Huelva with which she ended.

As is the custom in these large format summer festivals, the intermission served to prepare the stage for dance.

Antonio el Pipa, from a long line of Jerez artists, opened the second part with taranto and alegrías in his personal style.  His forms are easily recognizable: arms that draw lines in the air are his greatest virtue.  His bullfighter poses are another unmistakable identifier, repetitive but well-conceived.  He was accompanied by the voices of Felipa del Moreno, Sandra Zarzana and Carmen Cantarota, with the guitars of Javier Ibáñez and Juan José Alba.

It was Granada singer Marina Heredia who triumphed with the audience.  She is probably the most flamenco singer of all from her hometown, with a unique voice.  She was backed up by guitarist José Quevedo 'Bolita'.  The woman from Albaycín, despite her youth, is at a high point in her career.  Descended from a line of artists (Jaime el Parrón, La Porrona...), she has managed to make her singing a link between tradition and avant-garde.  This is probably why she leaves no one unmoved, and is appreciated as much by hard-core flamenco fans as by newcomers to the genre.  She began with alegrías, soleá, including a fandango, a long series of tangos “made in Granada”, and bulerías to close.  For the first time in the evening, the audience requested an encore, with a standing ovation and the desire for more Marina.  She wrapped everything up with a bulerías song in memory of Adela la Chaqueta.

Another local singer, Julián Estrada, returned to the stage which has become one of his favorite venues.  He's well-loved in his hometown, and it shows.  The singer wanted to please, and broke the mold opening with tonás.  Fully aware of his abilities, he takes full advantage of them with strength in his execution, ably measuring and playing with the tempos and the tones.  With the accompaniment of Manuel Silveria, his regular guitarist, he continued with soleá.  In the set of cantiñas and derivatives, they were joined by Jesús Zarrías, and the compás of the Gamero brothers.  After the tientos and tangos, fandangos with original verses and a dedication to the maestro of Puente Genil (possibly a creation of Emilio Pozo): 'Cincuenta años de cante, se celebra este día, se lo debemos al más grande, Antonio Fernández Díaz, llave de oro del cante'” (fifty years of cante we celebrate today, we owe it all to the great Antonio Fernández Diaz, holder of the Golden Key of flamenco singing).  He ended with a fandango of Carbonerillo, pushing his faculties to the limit.

The coup de grace was carried out by Chiclana singer Antonio Reyes.  Among his generation, this is the singer who raises the highest expectations.  His velvety voice, halfway between honey and the aromatic wine of Jerez, is enjoyed by everyone.  Commentaries by flamenco followers indicate that he is the fashionable singer right now, the one who is seen at the greatest number of festivals.  It may be true; without a doubt the singer has worked hard to get where he is.  Among his virtues, he delivers the cante with a slow tempo that adds solemnity.  With the guitar of Diego del Morao, and the compás of Juan Ramón Reyes, Tate Núñez and Diego Montoya, he began with soleá, followed by tangos that were Extremaduran throughout, siguiriyas, bulerías and fandangos as requested by the audience.  It was getting on near to 5am, and despite the fine performances, some older people were getting up to leave, but Antonio knew just how to hitch his cart to the remaining ones up until the lights were turned off. 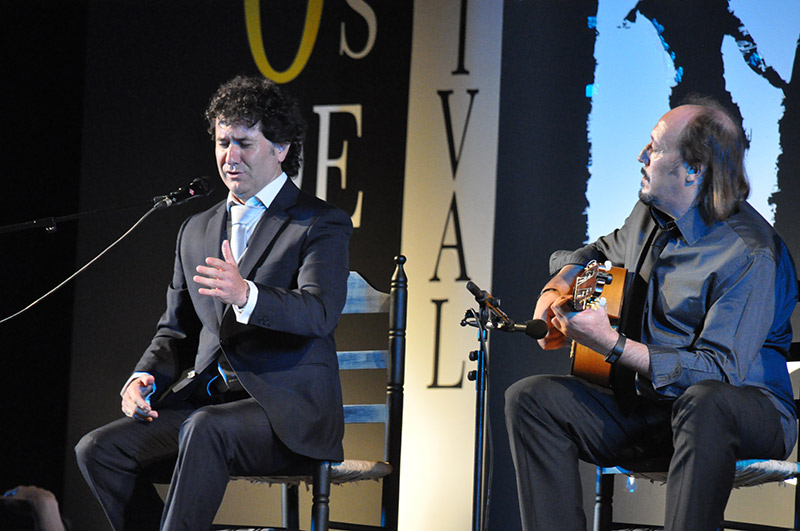 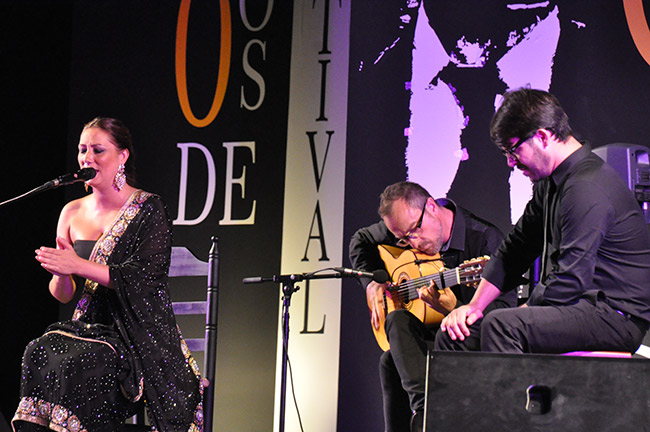 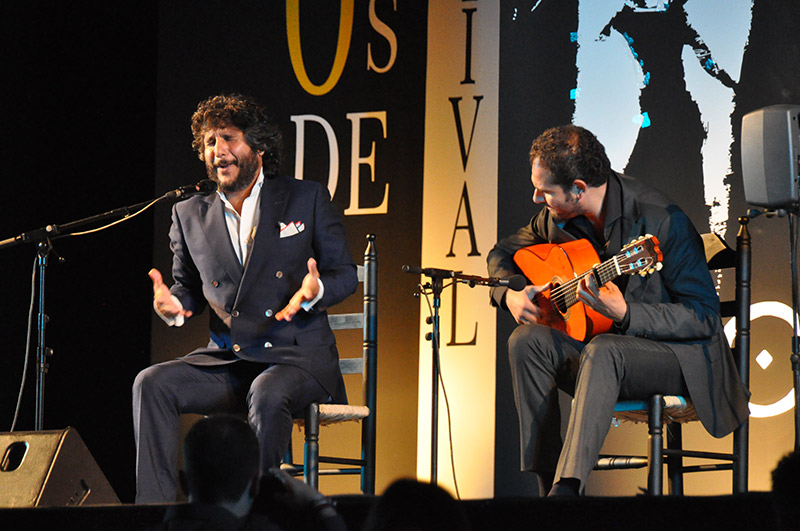