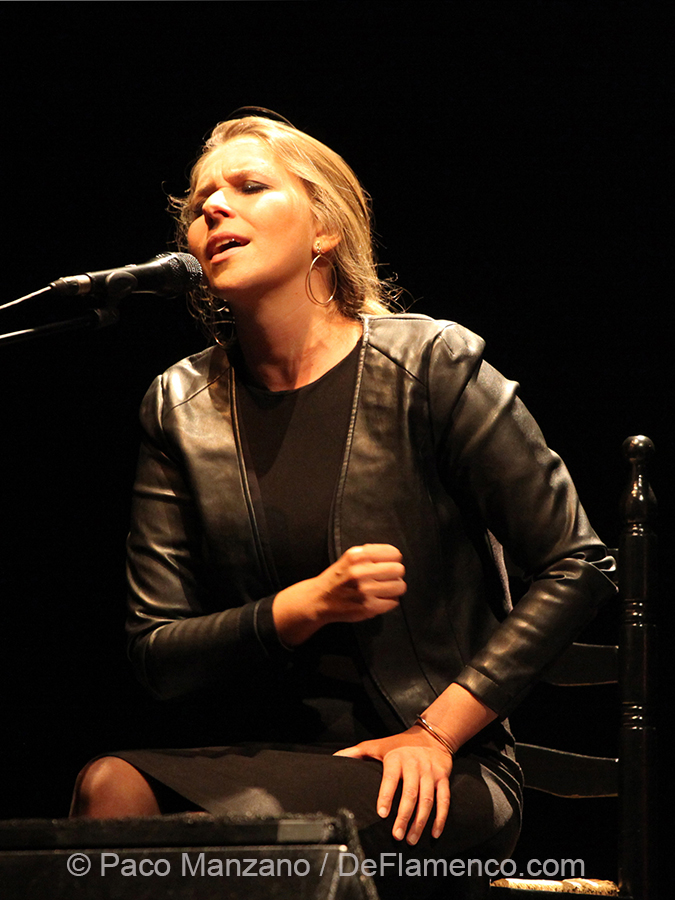 Rocío Márquez came on dressed in contemporary fashion with a fitted leather jacket; on her right, Francisco Contreras (Niño de Elche) and the Mellis; on her left, Raúl Cantizano with his electric guitar and the drums of Antonio Montiel.  She began recreating the most famous composition of Pepe Marchena, a colombiana with the feel of a goodbye.

Rocío Márquez tells us that Pepe Marchena used to like to dress well, and that during the Spanish Civil War, that nearly cost him his life.  Arrested by the Republicans, they were about to send him to the great beyond due to his look of being a wealthy man, when Juanito Valderrama intervened, called for Federica Montseny (who was then Minister of the Frente Popular) and the historical leader of the CNT send a driver so that Pepe Marchena, known as the Niño Marchena, was immediately freed.  This is the story as told by the son of Juan Valderrama, so proud of the gesture.  Oddly enough, Juanito Valderrame became one of the few flamenco artists of the post-war and the Franco movement to be heard on the radio.

Everyone knows Rocío made a record of Pepe Marchena's material, not just haphazardly, but with extensive study (and she plans on turning the work into a doctoral thesis), and she sings the material as audaciously as Marchena did.

Rocío announced her traditional side, and guitarist Manuel Herrera appeared on stage to get us right in the gut with siguiriyas.

Then came Pepe Habichuela, and it seemed Rocío's singing accompanied the things Pepe did on the guitar and which we don't hear anywhere else.  Habichuela ran down the figure of Marchena via his musical relationship with Juanito Valderrama, making no mention of the years of indifference and disdain for Marchena, his singing and his disciples, from the intellectual community.

Pepe Habichuela found just the right words to define his singer: “as young as she is, and she's got golden vocal chords”

Cantizano returned with his electric guitar, Niño de Elche making sounds in the darkness while the drums and some of the audience demonstrated that things were going wonderfully.  In actual fact, the lyrical pieces of Niño de Elche from his recent work “Voces del Extremo”,  would have fit well in the concert.  In this case it needs to be noted that this has nothing to do with flamenco, as with his upcoming performance at the Sonar.  But the audience seems to indicate this is a voice that needs to be heard.  In any case, the singer interpreted “El Coronel”, just as it was recorded on the Rocío's record, and once again the audience reacted.  The singer from Elche has other facets, such as illustrating the talks of Alfredo Grimaldos on flamenco and the Republic.

Rocío presented her two tendencies, the flamenco and the other one, without mixing her guest artists.  We would have liked to see how the compás of the Mellis sounded with the electric Cantizano, and this is where you remember Morente, who made flamencos move in the great abyss of “Omega”, and shared his knowledge of soleá with the rock musicians.  Rocío said she had a cold, while the rest of us felt the absence of “Castillos Invulnerables”. 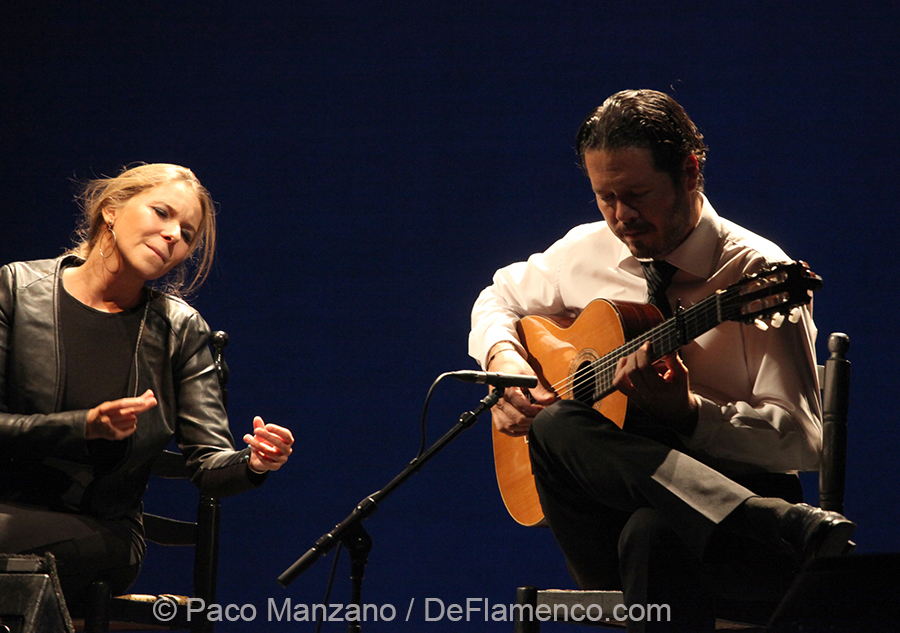 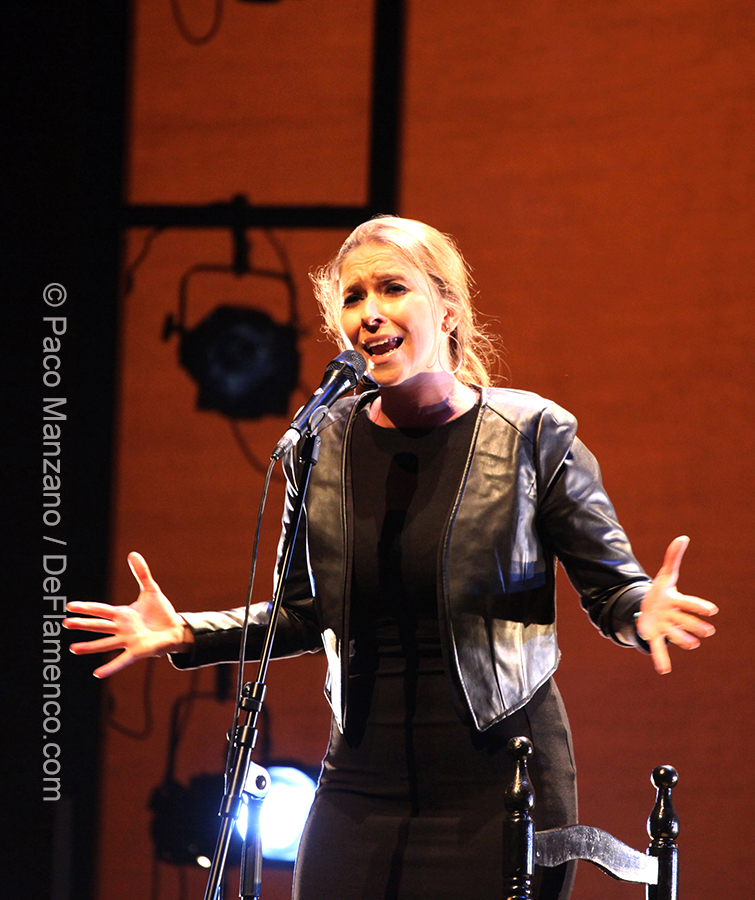 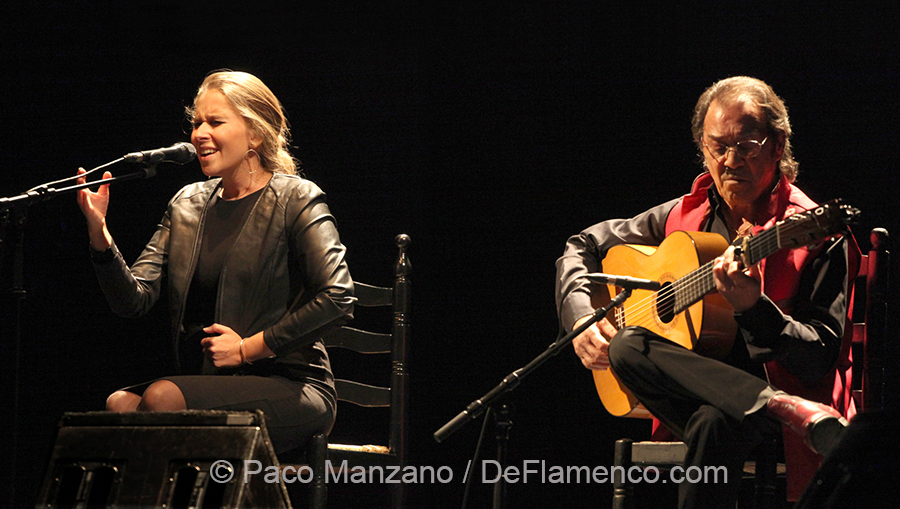 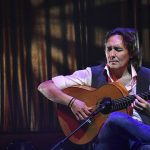