20 years of “Omega”: A tribute from the heart

At the Jamboree, Mariola Membrives presented a show in which pieces from the recording made two decades ago by Enrique Morente and Lagartija Nick were reinterpreted.

To pay tribute to Omega, the record made by Enrique Morente and Lagartija Nick, on its twentieth anniversary is crazy.  Mariola Membrives knew this, so she told the audience at the Jamboree about her nervousness, and the responsibility when they were about to embark on the third piece.  “Omega 20.16” is one of the projects born of “Lo Morente”, the series being celebrated this year by the Sociedad Flamenca El Dorado de Barcelona. 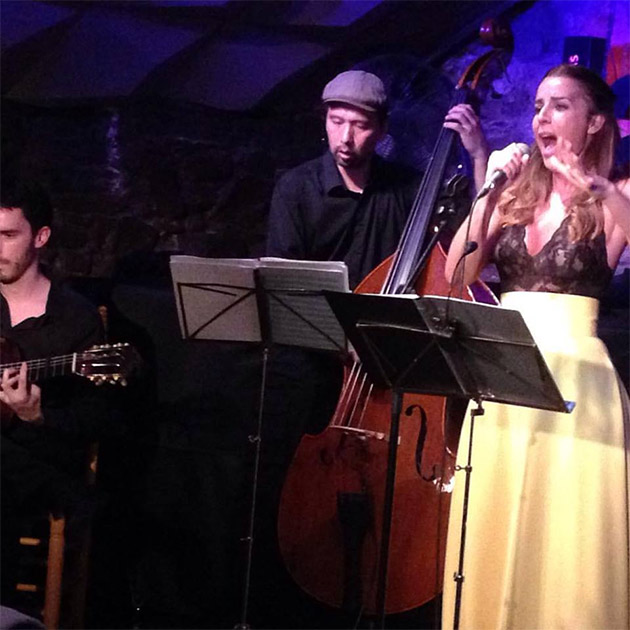 In this kind of tribute, two things can happen: that everyone comes up short not wanting to disrespect the many maestros included on Omega, or they go to the other extreme wanting to do something better.  The group went neither one way nor the other, and that's why they got it right.

“Omega 20.16” is therefore, a daring venture.  But only on a recording that sounds like a nightmare, the dream of a hiperconscious human, could anyone indulge in such boldness.  Morente's record was a trance, the overcoming of known areas.  The Omega of Membrives had the obligation of being, at the very least, something amazing.  And it turned out to be very moving.

It lasted one hour fortunately, because that intensity is unbearable for anyone's voice, even that of Membrives.  For the audience as well, they were on edge from the very first piece.

Membrives was singer, actress and reciter. She did everything well. She was moved, and managed to transmit, she let herself go with pieces like “Pequeño Vals Vienés” where she came off better moving away from the song, and giving a flamenco spin.  In “Niña Ahogada en el Pozo”, she chose to add lyrical flourishes because she wants to, and because she can: her voice is as big as the sky over Manhattan.

The “Aleluya” was just right, interpreted as weeping.  Because that's what a hallelujah is, a cry of relief, but a cry nonetheless.  An exclamation of “thank god!” that comes from the gut, not the mouth.  “Sacerdotes” was a delight, interpreted more slowly, more painfully, and that was where Mariola managed just the right looseness and contention required by songs that come from the deep inside.

The show lacks some cohesiveness, but it's only normal for a debut. Mariola's work was exhausting, she was fantastic in voice and communication, and all that was missing was to have let her hair down a bit more, both physically and figuratively.  Lorca was like that.  Cohen as well.  And the music of Omega allows for this.

Miralta was fantastic.  Vallés, discreet and precise.  Kamaguchi, dependable.  And Padrós, on trumpet, had a glorious moment when he put some Latin-sounding notes to La Aurora de Nueva York.  With these minimal beautiful Caribbean touches, New York sounded like a jungle.  And that balmy atmosphere in the background that described Leonard Cohen, was wonderful.

Mariota's voice should have been better backed up.  In that sense, the concert was more jazz than flamenco.  Small details that will improve with time.  Because we hope this tribute to Omega and Enrique Morente will go on and on.  For now, it's going to Málaga: on May 13th it's at the Térmica.  Don't miss it.