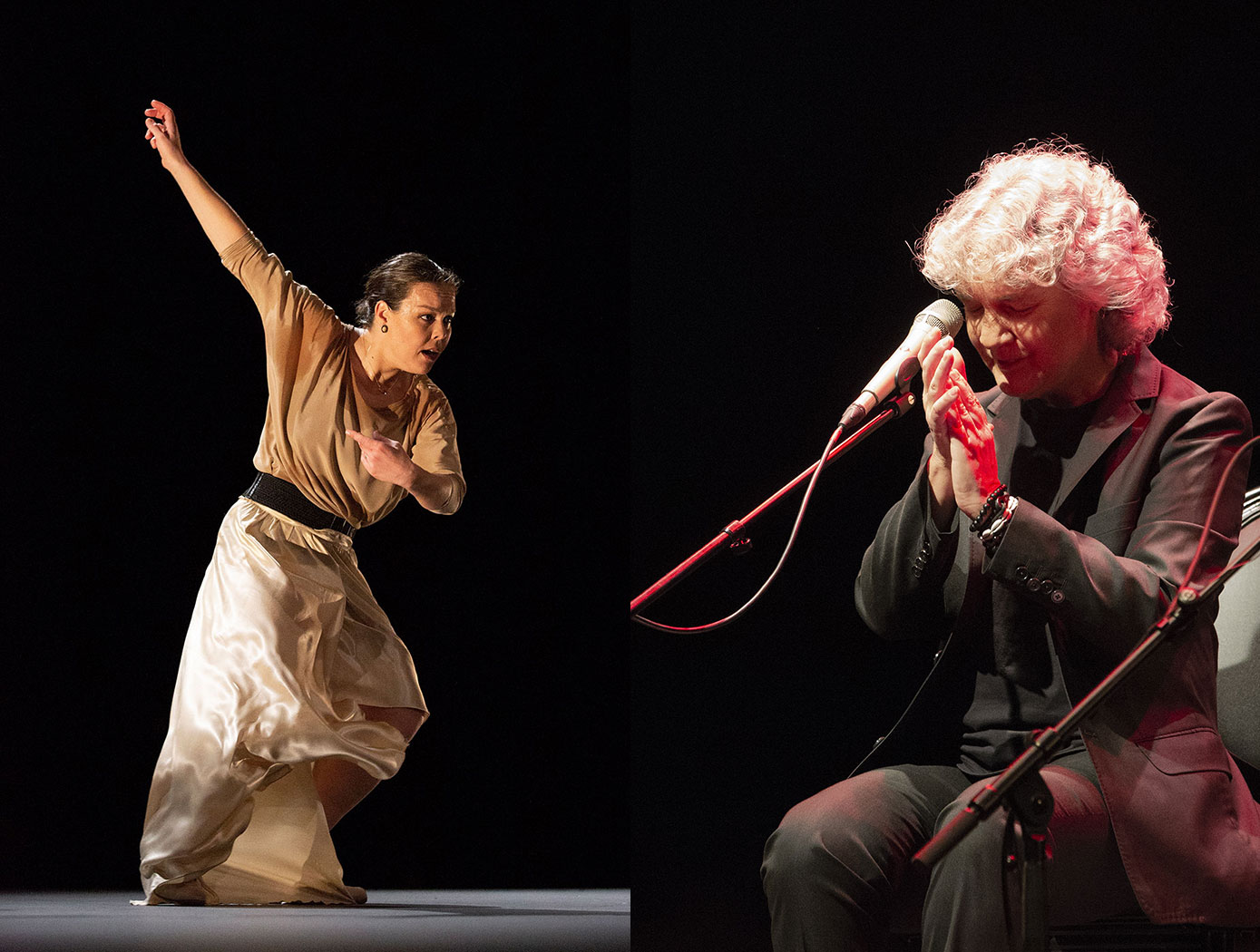 Mayte Martín, original and yet absolutely classic.  She achieves that difficult balance through forms that many today would call “historic”.  The great flamenco machine accomplishes its mission when this contemporary woman with an impeccable career manages to move our emotions with no more backup than a guitarist cut from the same cloth.  Alejandro Hurtado gives a different color, a master of subtlety, his playing eschews modern harmony and he taps the face of his instrument like Manolo de Huelva.

There’s no percussion, not even a palmero.  Who would dare take on such a challenge in a large theater today?  Instead of the typical primal scream of flamenco singing, this is an exquisite sweet-and-sour approach that invites us to explore an alternative path to assimilating the reality of the human condition.  Mayte has a clear voice that also pleases those who might take their flamenco straight-up with a more rugged delivery.  Because this is not soppy sweetness, but the painful kind.

She sang the most classic verses of each song-form.  I don’t know about the rest of you, but I’m especially fond of that great poetry that has stood the test of time in granaína, petenera, siguiriyas with Pena’s cabal, tientos tantos prologued with the Caracol zambra Salvaora.  One member of the audience shouted out: “Mayte, you aren’t just a great singer, but a great student of flamenco as well!”.

The recital ended with a series of so-called “ida y vuelta” forms: Marchena’s milonga, Valderrama’s colombiana and guijira, cantinas and an equally classic assortment of bulerías with Manolito de María’s Padre Nuestro, María de las Mercedes and El Compromiso, among others. Mayte never imitates the past.  She worships at its altar and recreates it in her own way, without diminishing the flavor.  Her work is a monument to the grandeur of flamenco, and to her own intelligence and capacity.

This work of Rocío Molina has a backstory.  Over the last five years there have been associated references, as well as fragments and transformations of a complicated half-improvised “performance” in constant evolution.  As spectator and critic, I feel free to approach the experience with no more obligatory baggage than eyes, ears and mind wide open, prepared to receive Rocío’s message.  So, be advised, there are four emergency exits and smoking is not permitted.

The small cast is made up of two outstanding artists who tend to surprise us, each one in their own way.  Rocío, with her fearlessness and her objective of questioning norms with the innocence of a small child.  Rafael Riqueni, with his extraordinary sensitivity and the beauty of the music that flows from his mind and hands through a piece of wood with taut strings.

“Impulso” isn’t for the average flamenco fan.  In fact, those with conventional taste might find it “difficult”.  No singing, no specific rhythm, no traditional forms.  The hardest thing is the absence of a human voice that could have given color to a show that cultivates a feeling of isolation, although I’m sure Rocío Molina constructed this work exactly as she intended: intimate and thought-provoking.  Forty-five minutes of fascinating poses, arms that move in seemingly impossible ways, fragments of footwork, sensory deprivation and an ironic smile when you least expect it.  In other words, a dream-like ambience, Rocío Molina’s specialty.

The mostly French audience went wild, applauding enthusiastically through a long standing ovation.  You need to see the great Rocío Molina’s “Impulso”, and each one must draw his or her own conclusions.  Because the dancer wouldn’t have it any other way.