Through a series of irreverent gags and good musical interpretations, the Cádiz people gave their views on flamenco, pointing out all its contradictions.

The best route to loving, caring for or scolding others, is to begin with oneself.  And that’s what David Palomar, Riki Rivera, El Junco and Roberto Jaén did in ¿Qué pasaría si pasara?, an ode to freedom they brought to the Festival de Jerez and began with a grab-bag of platitudes regarding their hometown of Cádiz and its inhabitants. “That in Cádiz we know how to feel pain”, “that not everything is fun and games”… In this way the most original straightforward show to come out of flamenco in recent years got underway, and the interpreters were a sort of barbershop quartet doing a little of everything, because times are what they are, and these men, as made perfectly clear, are legitimate children of the present.

To break down the jokes and monologues would be to cheat future viewers of an hour and a half of ingeniousness, a time which, if you’re into flamenco or know its code language, you will enjoy (or be annoyed by) all the more so.  Because the four ARTISTS (just like that, in caps, it’s not a typo, but a defense), turned around the mirror in which they had peered, to psychoanalyze the world of flamenco, and everything was fair game: their colleagues, the critics, the press, the fans and the theoreticians.

But the movement is expressed on the fly, and you can’t call yourself  flamenco if you don’t know how to sing, dance or play something.  Which is why, after each brutal but therapeutic gag, we see El Junco dance a delicious bit of bulería.  And after a lively speech, but one of truth and pointed darts, Rivera played a guitar solo of milonga and guajira that was worth an entire recital.  Jaén on percussion accompanied on an excellent level and Palomar displayed his vocal talents with a well-placed high voice for soleá, tanguillo, siguiriya and bulerías, doing whatever he felt like doing.

It was just a coincidence, but very opportune, that the quartet was appearing in Jerez the same day the city and the social media were afire due to Rocío Molina’s on-stage nudity in Caída del Cielo. It would have been impossible to find a better trigger to deactivate so much anger, such idiocy, such closed minds and rotted brains and souls of people who see a naked woman’s body as an offense to an entire art-form.  Which was why it was providential that they came last night, that they made fun of Don Antonio Mairena, searched for the “duende” with lots of sass, and ended up finding it in the gnome David.  Although it was very entertaining, you can be sure someone was offended, because lately we’re discovering that Spaniards (not to mention flamencos) are as superficial as freedom of expression.

“A flamenco without duende, is like a monarchy without an idiot” said Palomar in the series of criticisms of a corrupt political class.  “Maybe if we tell people the brain is an application, they’ll start using it” said Jaén in another of the phrases with which they analyzed an alienated society.  The ARTISTS also poked fun at the people of Cádiz, Seville, Aragón, Madrid and Catalonia.  They defended the effort to achieve goals, as opposed to luck, and asked people to love one another and to stop paying attention (in flamenco and in life) to those who insist anything in the past was better.

For all those reasons, Palomar, Rivera, Jaén and El Junco weren’t hot air, but hurricane winds that shook up the audience in need of a shaking.  They even represented a mock Ouija board which they used to invoke departed artists, which was the most daring skit, something that could have caused the house of cards to come tumbling down and destroy the equilibrium, but turned out being the most electrifying moment.  You can’t describe it, you had to be there, but Chano Lobato, Juanito Valderrama and Camarón de la Isla appeared, and if the results were chilling, it wasn’t because of the idea nor for being irreverent, but rather because it came off as a tribute to a well-understood memory, and to knowing how to do it and how to be.  For the ending, each one spoke through an off-stage voice with which they analyzed the show.  “I wonder if anyone was annoyed by what we said about Mairena”, mused Palomar, a showman who, had he been born in New York, would be walking the streets on a red carpet.

As a sort of coda, Rivera employed the sweetest possible delivery to sing a song that said: “One second is worth the world / and each person chooses to give it away / and when.  Remember that if you go to see them, not just the jokes, because a gag is only a moment, but ¿Qué pasaría si pasara? delves into topics that affect truth, beauty, life, things that we ought to stop and think about each day.  So please, Palomar, Rivera, Jaén and Juan: don’t even dream of backing off. 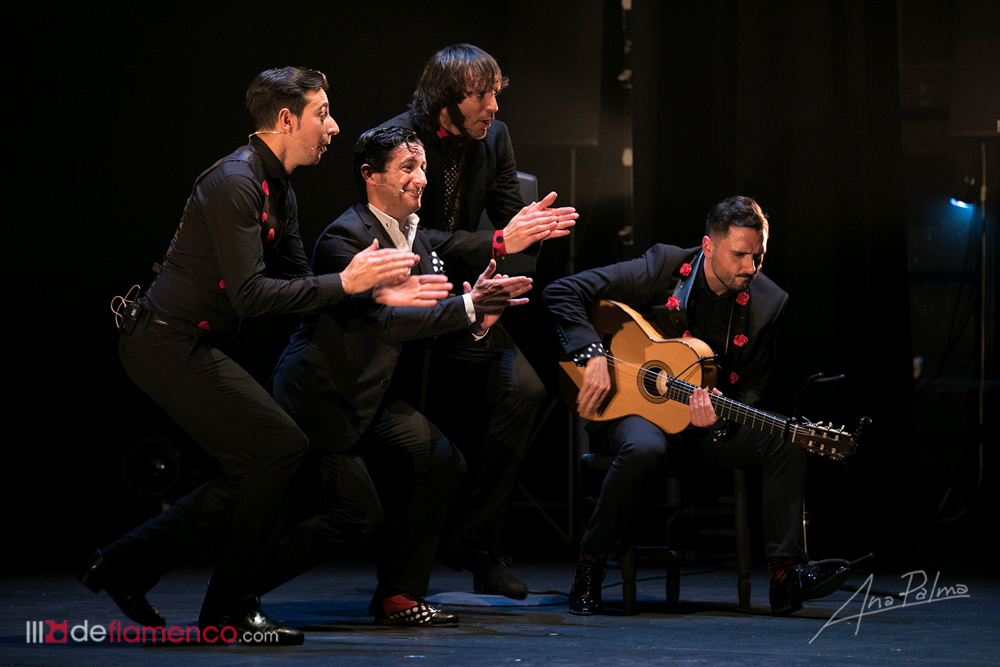