August 22 to 27, flamenco once again goes north, to the festival Flamenco on Fire in Pamplona.

In Madrid, festival director Miguel Morán presented the 4th edition of Flamenco on Fire at the Corral de la Morería, accompanied by the cultural counsellor of Pamplona, along with Mikel Urmeneta, designer of the Festival’s image, and artists such as Antonio Carmona, Juan Manuel Cañizares and Pedro el Granaíno. 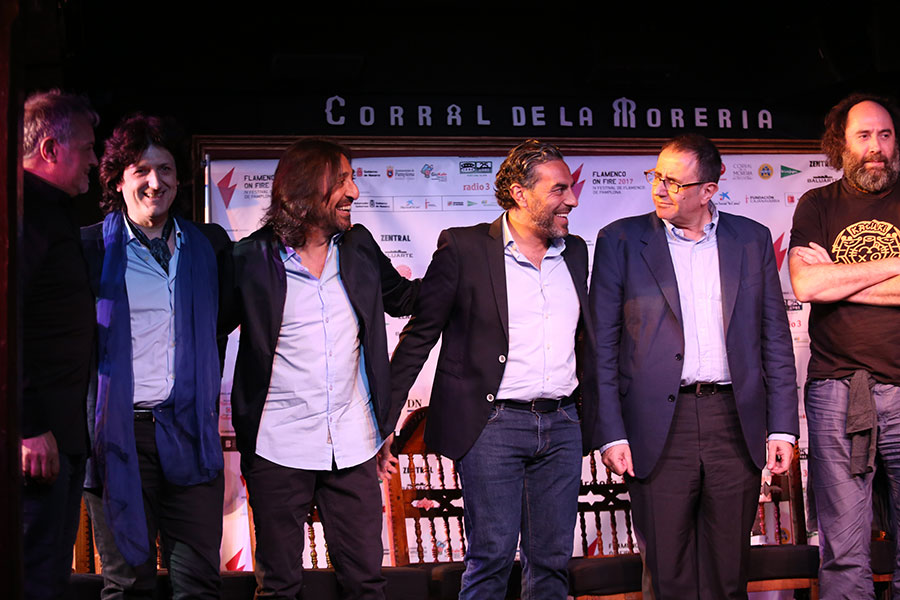 See details of the program in our agenda

The Festival is dedicated to Camarón de la Isla on the 25th anniversary of his death, and includes the participation of artists such as Juan Manuel Cañizares along with the Orquesta Sinfónica de Navarra, Pedro el Granaíno & Duquende paying tribute to Camarón, Carmen Linares and Marina Heredia & Arcángel with his new show “Tempo de luz”, Rafael Riqueni, Antonio Carmona & Miguel Poveda at the Baluarte and the Sala Zentral.  At the Hotel 3 Reyes, the festival’s headquarters, each night intimate flamenco shows will be featured with Martirio & Raúl Rodriguez, Granada guitarist Miguel Ángel Cortés, David & Carlos de Jacoba, Tomasito, José Maya and José Enrique Morente.

After the success of previous editions, flamenco once again goes north, August 22 to 27, to establish a showcase in Pamplona for the best talent of the current flamenco scene.  The capital of Navarra is offering an exquisite program of culture, music, gastronomy, pastimes and art, becoming a point of encounter for accomplished artists and flamenco followers alike.

As each year, the Festival is dedicated to the memory of the maestro Sabicas.  With this gesture, the objective is to honor this figure, a major genius of flamenco, thus upholding the Pamplona roots of this art-form.  In this edition, Camarón de la Isla will be honored as well, a singer of singers par excellence, on the 25th anniversary of his death, and Leonard Cohen will also be remembered for his love of flamenco, his contribution to its understanding and his undeniable contribution to music.

Flamenco On Fire has been adding free open-air activities that make use of various important points throughout the city on each day of the Festival.  The series “Flamenco en los Balcones” will once again invade the streets of Pamplona.  There will be three recitals each morning of voice and guitar from the balconies of the Calle Mañueta, the Town Hall and the Plaza del Castillo from the Hotel La Perla.  In addition, this fourth edition is initiating two new series: “Vermut Flamenco” and “Pamplona on Fire”.  In the first, a DJ selected for the occasion will play his personal selection of flamenco, for an aperitif in the Plaza de los Burgos.  In this same plaza, during the afternoons, local groups of flamenco and flamenco fusion will be performing.  The complete programs of “Flamenco en los Balcones”, “Vermut Flamenco” and “Pamplona on Fire” will be announced at the end of June.

As in previous years, Flamenco on Fire is organizing ‘IV Jornadas sobre Arte Flamenco de Pamplona’ with the collaboration of the Federación de Asociaciones Gitanas de Navarra Gaz Kaló, conceived with the objective of honoring the figure of the maestro Sabicas.  This year there will also be various activities in honor of Camarón de la Isla.  Master classes, workshops, conferences, round-table discussions and the projection of documentaries will also be offered.

The gastronomic route is also back, “El Pincho de Sabicas”, organized by the Asociación de Hostelería Navarra.  More in demand each year, more than 30 establishments will serve small snacks, “pinchos”, inspired in the maestro Sabicas, offering succulent tidbits to try.

Flamenco on Fire this year debuts a new image designed by Mikel Urmeneta, versatile and creative artist with a successful career and vast experience who has been recognized in 2017 by Forbes magazine as one of the 100 most creative individuals in the world.

Before the presentation of the festival, Juan Habichuela (grandson) performed along with Popo. 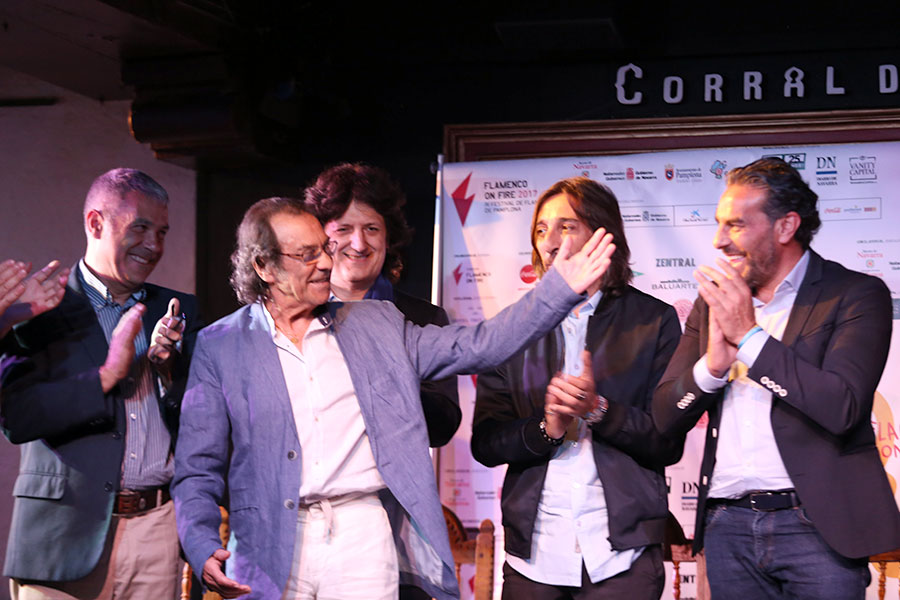 At the end of the presentation, Pepe Habichuela was invited on stage, and was named “Ambassador of the Festival Flamenco on Fire”.

All the information on ticket sales, as well as other details can be seen at the web:  www.flamencoonfire.org. 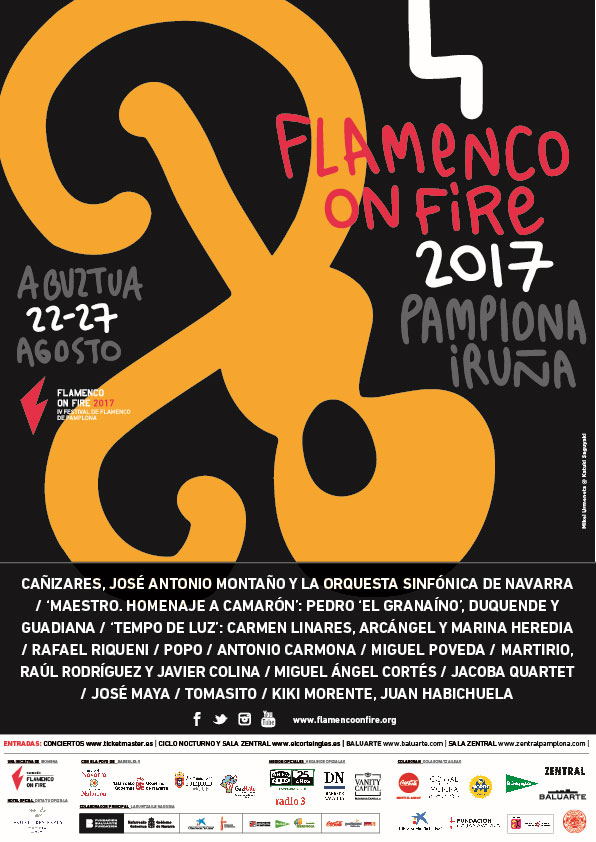