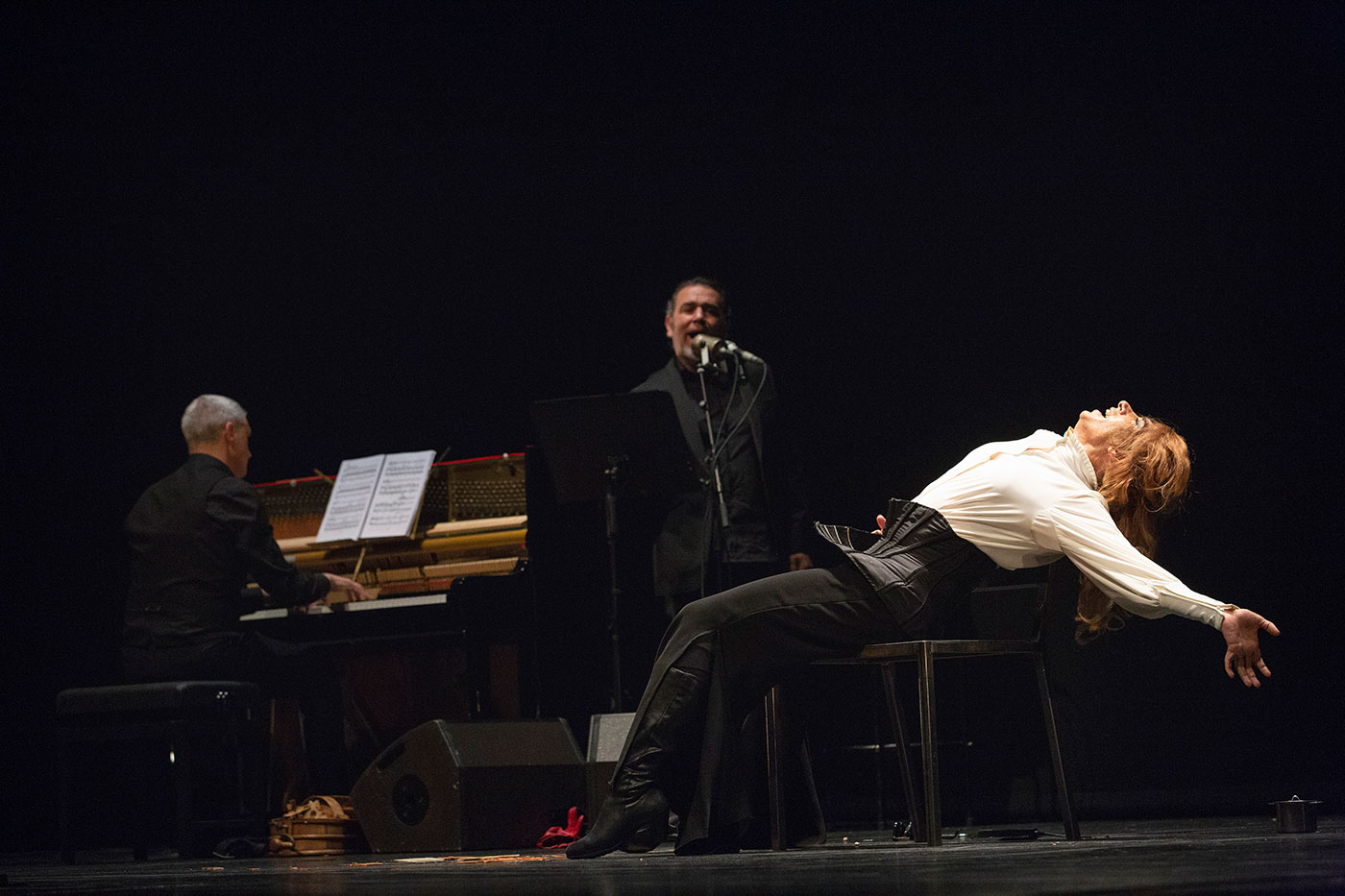 Eleven days that ended all too soon.  The Festival Flamenco de Nimes has closed its doors on its thirtieth anniversary edition that included top stars, an intense program of parallel activities, conversation with old friends and making new ones… A couple of small mishaps and technical problems, but in the end what remains is the memory of having shared our love of flamenco with our equally appreciative French neighbors.

The last two days featured double performances to satisfy the demand for tickets to see Rocío Molina with her show “Impulso”, and “El Amor Brujo”, version Israel Galván.  Falla’s classic work that fed the popular concept of the passionate, dangerous, enigmatic gypsy, as never before seen.  The familiar music was played by the versatile Alejandro Rojas-Marcos, as we visited the virtual amusement park that exists within the head of Israel Galván.  Strange things happen, but you go with the flow rather than ask questions that have no answers.

By now, everyone knows that “Eduarda”, who stars in this work, is actually Israel Galván in drag.  Or to be more accurate, dressed as an English school-marm with messy hair.  It’s not your run-of-the-mill cross-dressing, but rather an artist who delivers deliberately clumsy movements, like the bearded guys who dress up as women at carnival time.  Overall, the tone is humorous.  If I didn’t know better, I’d say Galván studied to be a mime.  A bipolar mime with schizophrenic tendencies.

What Israel appears mostly to want is to have a good time.  He dances seated in a straight chair as Mario Maya sometimes did in his day.  He crosses his legs in provocative fashion as in the famous scene of actress Sharon Stone.  He does a bit of twerking.  And he nearly falls off the chair…precarious situations and the noise things make when they break are constants in the work of Israel Galván.  He lies flat on the floor, face up, with his extremities trembling like those of a dying roach, and the music of the Fuego Fatuo was also present.

And the chick-peas for heaven’s sake!  Years into the future they will still be talking about the chick-peas.  Two or three kilograms.  Dry and unsoaked.  Israel teases us, pretending to scatter them on the floor.  Then he goes and does it, and the audience emits a collective “ooohh”, supposedly because there can be no more dance.  But no.  The dry legumes continue to roll around the floor with each step taken by Israel, now dressed as a man.

David Lagos does a fine job, pulling music and songs out of his hat, singing along with the recorded voice of Chacón, always seeking out the right edge to accompany and complement Galván’s creativity.  Rojas-Marcos, who in addition to the piano brings out his hurdy-gurdy, completes the trio with his imagination, versatility and intelligence.

So it’s “au revoir” Nimes…until next year with the beginning of another decade of art and discovery.