This guide is conceived for people who are basically unfamiliar with the city of Córdoba and who know little or nothing about flamenco.

1. It’s no use running. In any case, that’s very un-flamenco. You’re not going to be able to see everything, you’re not going to get your doctorate in flamencology in one night, and you’re not even going to be able to see everything interesting there is to see in Córdoba. But if you organize yourself, it could be an unforgettable night. If there’s something you’re especially interested in, get there early and see if it’s a large space, if there are chairs, at what time you can get in, where’s the nearest bar to have a bite to eat… If your friends prefer to just wing it, with no plan, the best thing is to meet up with them at some other time.

2. Forget about Rosalía. (Bull-ring at 12 midnight). If you don’t have a ticket and don’t believe in miracles, you’re not going to be able to see the show. If you do have a ticket, you already know what you’re getting into, a pop star with a certain vision of flamenco that surprises people wherever she goes. Her shows look very good on video.

3. Ballet Flamenco de Andalucía. (Plaza de las Tendillas. 10:30pm). For all ages and for all audiences. A company in which a maximum level of artistic quality coincides with popular content.

5. Remedios Amaya (Plaza de la Juventud, 11:00pm) Her show is called “Where the lava comes from”, her singing is a festive volcano of tangos and bulerías with depth and meaning. If she ever returns to Eurovision, she’ll bring the house down. Ángeles Toledano is her guest artist.

6. Patricia Guerrero. (Torres de Calahorra. 12 midnight). Never forget that friend who said: “go see Patricia Guerrero”, it makes no difference whether or not you like flamenco. Patricia is captivating on stage. She’s presenting “Pies de Barro” about a huge statue of the king of Babylon.

7. La Macanita, María Terremoto. (Plaza de San Agustín, half past midnight). From birth, both women grew up with flamenco singing as Macanita demonstrated at the age of 4 in the legendary program “Rito y Geografía del Cante”. María is the granddaughter of Terremoto de Jerez and daughter of Fernando, and keeps the family flame burning bright.

8. Dúo del Mar. (Patio de los Naranjos, half past midnight). A dream-like setting next to the Mezquita. Two guitars, one classical and the other flamenco, linking two cultures. Marta Robles and Ekaterina Záytseva.

9. Rosario Montoya. (Compás de San Francisco, half past midnight). The flamenco piano has for several years been the star instrument incorporated into flamenco. Mujeres Mediterráneas is a quartet in which Arabic and flamenco music join hands (with some Sephardic melodies), three cultures.

10. Sarayma (Plaza de la Correder. 2:00am). Born in Algeciras, she learned flamenco which she combines with pop music. Her top-notch guest artist is Diego del Morao.

11. Esperanza Fernández. (Plaza del Potro. 3:00am) The singer from Triana will present “Lo jondo y verdadero” along with the group headed by Miguel Angel Cortés.

12. La Tremendita (Jardines del Alcázar, 4:30am) The last concert of the night deserves as much concentration and respect as the first. Rosario, with the help of her electric bassist and the heaps of rhythm that move in her orbit are capable of turning all the musical concepts of the night inside-out.

Perhaps you haven’t noticed, but all of the shows star women.

And remember that silence is probably one of the most beautiful kinds of music that exists.

And that Córdoba is an incredible city. 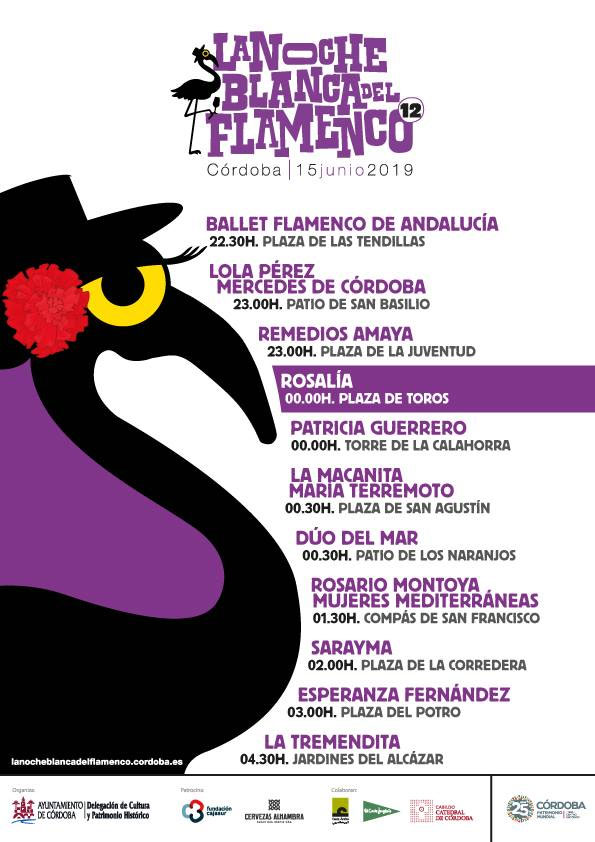