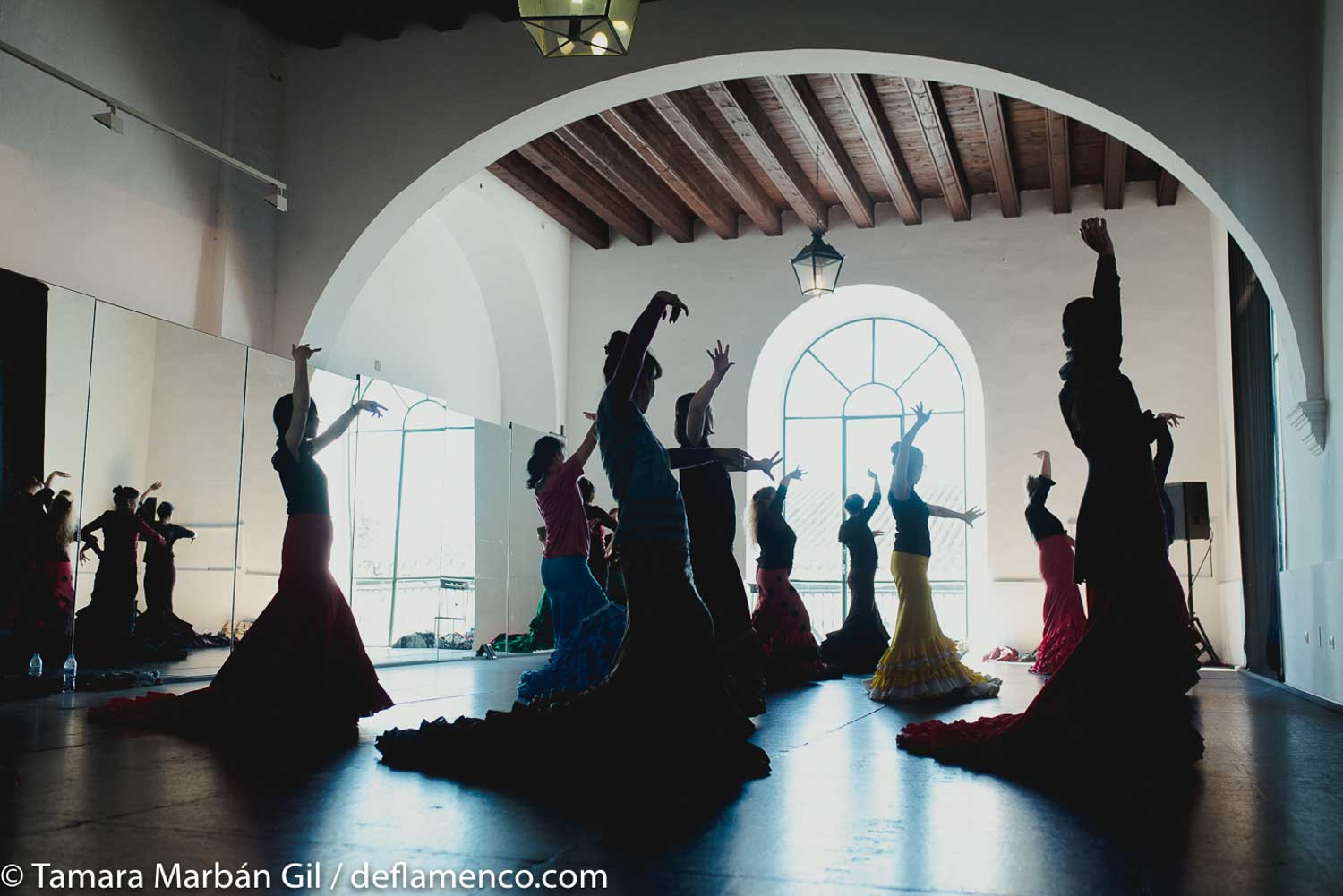 Slipping in surreptitiously we peeked on three of the courses being given during the Festival de Jerez in various parts of the city.  We were able to observe the wisdom of three Jerez women: Angelita Gómez, Mercedes Ruiz and María del Mar Moreno.  With varying degrees of flamenco knowledge, in addition to a genuine desire to learn the ins and outs of the movements, dozens of students, mostly women, from every part of the world (very few Spaniards), they hiked up their rehearsal skirts in time to the music.  Zero mathematics, “rhythm and more rhythm!“ repeated Angelita Gómez over and over in one of the classes of bulerías de Jerez.

The veteran 76-year-old maestra twirled around with agility surrounded by intense observers anxious to discover what the trick was about. The thing is, there’s no trick as such: just listen, and then listen some more.  “Let’s all listen” urged María del Mar as the only instruction.  Morena, one of Angelita’s disciples, gave an intensive course called The mystery of the bulería de Jerez”.  It’s not so much about where the movement goes – gracefully move the shoulder forward, a barely perceptible movement – which is choreographically insignificant, but rather how to use it at the right moment.  That’s the difference between understanding or not, and, who knows if you get it right, at that precise moment when the astros align and someone shouts “ole!…long live your mother and your father, your grandmother and grandfather!”, and the guitar is left shaking. Your eyes, bubbling with perspiration thanks to the power of the whole thing, and you pull off your burning shoes, pulling yourself together once you catch your breath.

The students from Mercedes Ruiz’ classes of technique and style of the bata de cola, warming up their multicolored ruffles with soleá, were also left catching their breath.  Above and beyond how these three dancers and teachers open up wide the gate to flamenco dance and their knowledge, special mention must also go to the guitarists and singers, men and women, who back up the learning process, rehashing again and again the same measures so that all the students may locate the path and get it down pat. For Mercedes Ruiz it was Santiago Lara with Javier Peña, with Angelita Gómez, Pascual de Lorca and Israel López and with María del Mar, Santiago Moreno and Antonio Malena.