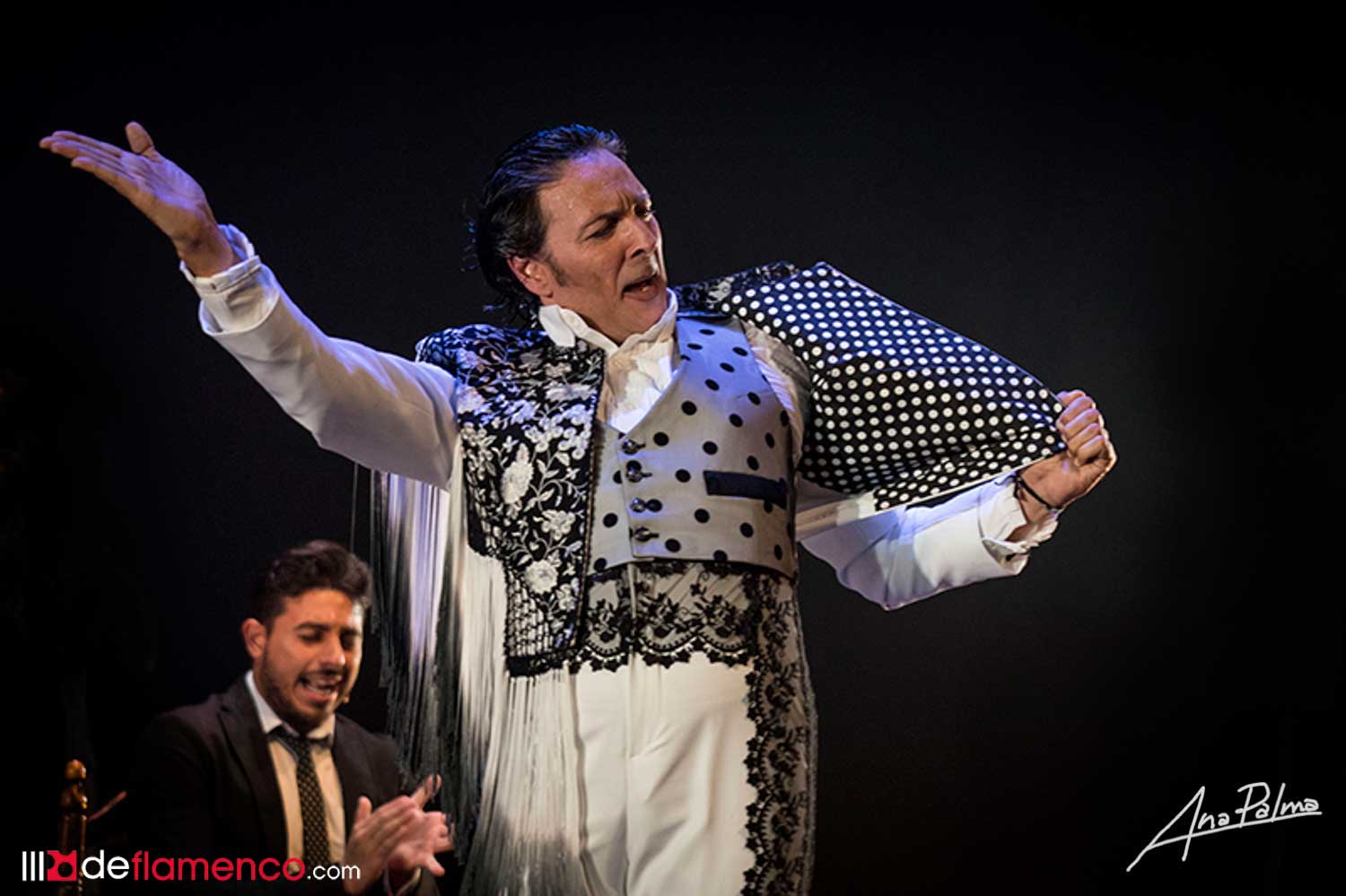 On Saturday, at six in the evening, the program at the Sala la Compañía got underway with the Winners’ Gala of the 7th Concurso Internacional de Baile Flamenco Puro de Turín.

Shortly afterwards, at the Villamarta Theater, we were able to enjoy the return of a dancer who had been a young hopeful and for several years was never left out of this Festival. He was the idol of a certain sector that would scoop up tickets to his show within just a few days of being put on sale.  Last night, Antonio Ríos Fernández, “El Pipa”, grandson of Tía Juana la del Pipa, his permanent inspiration, came with the clear aim of recuperating that glorious past.  To open the show, he came on stage alone wearing an extravagant suit, and with a broad gesture silently offered his bigger-than-life presence to the audience.  Moving to the silent rhythm of bulerías, the message his expansive movements projected was “Jerez, I’m back!”

Throughout his career, Antonio El Pipa has often revisited the same message with themes of tradition, family, cultural heritage and flamenco as a way of life.  His debut at the Festival in 1997 was with the work “Vivencias” (true-life experiences), and the young artist became famous overnight.  Now, more than two decades later, amidst a sea of contemporary dance, with his work “Estirpe” (family heritage), this man continues to defend his unshakeable conviction of what he learned from his family.

The first thing I notice on the program is the attribution “Music: Popular”, nothing more, and it was a like a sudden fresh breeze. Fine singers supported this almost innocent vision of el Pipa’s: the power of San Miguel in Jesús Méndez, the painful sweetness of Antonio Reyes and the aggressive delivery of young Samuel Serrano, in addition to the singing and rhythm of Morenito de Íllora, Joaquín Flores and Jesule de Tomasa, with the guitars of Juan José Alba and Javier Ibáñez.  A touch of color and musicality was added by singer Joana Jiménez with her bulerías and lyrical songs.

Antonio El Pipa interpreted three main dances: siguiriya, alegrías and soleá.  A bridge between the informal improvised dancing seen in communal patios and the polish of theatrical presentations, perfectly homogenized and communicated with affection and sincerity.

At midnight, in the González Byass winery, the much-admired guitarist Rafael Riqueni took us on a tour of the compositions from his new record “Herencia”, in addition to other pieces with second guitarists Salvador Gutiérrez and Manuel de la Luz. (video)